The UN Security Council rout: Canada's (at the) back!

Paul Wells: Believing a win at the UN would fall from the heavens on Trudeau because he wasn't Harper was an expression of the narcissism and shallowness that have characterized this government during much of its time in office 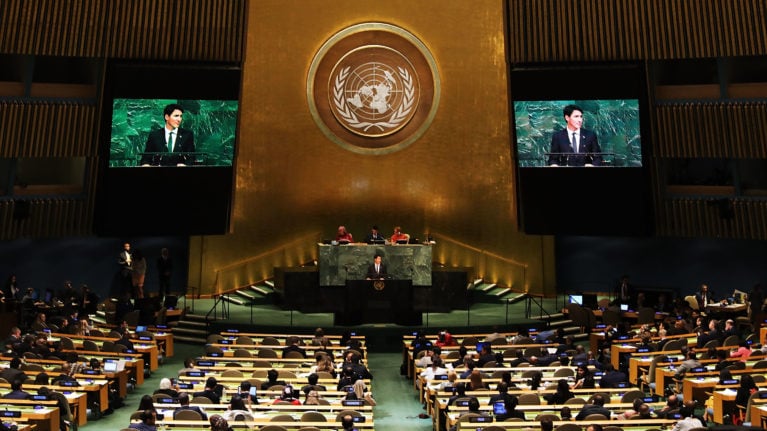 It’s important to resist the urge to overdramatize. Most of my pundit colleagues have spent years insisting there is no value in a United Nations Security Council seat. Fair enough: then hardly anything is lost if Canada doesn’t get one, right?

And, as former Trudeau government staffer Jocelyn Coulon pointed out in his odd but useful little 2018 book about Justin Trudeau’s foreign policy, the way power, interest and voting blocs have evolved, it will now always be difficult for Canada to get a temporary Security Council seat.

But still, holy cow. The goal was selected by Justin Trudeau. His government announced it with glee, never stopped clapping itself on the back for wanting the seat. So losing with fewer votes than Stephen Harper’s government won in 2010 is an indication of poorly aligning resources to goals, at least. Or of premature bragging.

For myself, I probably pass for relatively pro-UN in the pundit class. Since the aftermath of World War II, the world has had a United Nations; a trans-Atlantic military alliance, NATO; a project for replacing mass slaughter in Europe with trade and bureaucracy, the European Union; an expansionist, interventionist United States with a large nuclear arsenal; and no world wars. Every part of that apparatus is open to criticism, boy howdy. But I like the result. So I figure each part is probably better than not having it there.  And if you’re going to have a UN, which is basically a forum for countries that of course are often run by awful people to talk about the hard stuff, it’s fair to want to be influential within it. So wanting a Security Council seat is not, to me, an incomprehensible impulse.

Believing it would fall from the heavens on Trudeau because he wasn’t Harper was an expression of the narcissism and shallowness that have characterized this government during much of its time in office.

I’m not on Twitter any more and I try to limit the urge to peek, so I’m only guessing, but I suspect the Liberal-adjacent campaign to blame the UN for Canada’s defeat is already well underway. One could already hear the occasional mumble around Ottawa in 2016 that Trudeau’s entirely laudable efforts on gender and LGBTQ equality and reproductive rights were a hard sell in Africa, where most of the UN swing vote resides.

So, we will now be told, the world just wasn’t ready for Justin Trudeau’s unapologetically progressive vision. One suspects the Norwegians will, in victory, be too polite to remind Ottawa Liberals of Norway’s Action Plan for Women’s Rights and Gender Equality in Foreign and Development Policy, which predates Trudeau’s. As for what Ireland’s retiring and immensely popular prime minister Leo Varadkar will tell Trudeau… well, I’m sure he’ll be polite about it.

So if Africa could manage to vote for a country with a gay PM and for—how to put this?—for Norway, then Trudeau’s Instagram account’s progressivism probably wasn’t the deal-breaker. Shamrock Twitter will thus probably move on to blaming the Great Satan, Stephen Harper. He put Canada into a global esteem hole and Trudeau just hasn’t yet managed to dig us out, we’ll hear.

Never mind that the vote suggests Trudeau has been digging the wrong way. I suppose the argument is at least minimally plausible, and on Twitter, nobody ever needed more than that. I read this analysis quoting a Canadian analyst who said that, to the extent Canadian diplomats were buttering up their colleagues by telling them that “Canada’s back!”, the Norwegians were replying, “We never left.” That could, if you want to make yourself feel better, read as partial confirmation of the Harper global-esteem-hole theory. But the argument does feel more than a little sooky.

What went wrong? Some things beyond any Canadian prime minister’s power to influence, for starters. We’re next door to the madhouse, after all, and just as Trudeau decided early he was limited in how much criticism he could direct at Donald Trump, similarly he must know that he’d have benefited in the UN race if he had drawn a sharper distinction between Canada and Trumpland. It’s fair to believe the lesser goal wasn’t worth sacrificing the larger.

It’s also true that Canada simply doesn’t look like an underdog anywhere in the world if you’re not Canadian. It looks like a huge, rich, lazy country that could almost always stand to be taken down a peg. The Canadian delegation was, in the home stretch, reduced to arguing that in a crisis, it might be a good idea for the world’s (real) underdogs to “have another G7 country at the table.” I have a hard time believing that was a big vote-winner. “Give Privilege a Chance” just doesn’t feel like it resonates.

And of course, Canada is a big cold country with abundant natural resources, which means it is good at mining and bad at hitting carbon emission targets. This gets noticed.

So much for the big things Trudeau couldn’t have fixed. Now for all the big things he could have. Making the only-very-intermittently-charming Stéphane Dion his first foreign minister was his choice, after all. Replacing Dion with Chrystia Freeland, who ostentatiously does not care about most of the UN swing countries and was steadfast in her refusal to grace them with her presence, was his call too.

Dion met thirty other countries’ foreign ministers in 2016, four years ago, because, Coulon writes, the other candidate countries were already well ahead of Canada in the schmooze-stakes. Responding, again appropriately, to Trump’s election, Trudeau hatched the stupid idea of foisting Dion off as concurrent ambassador to the EU and to Germany, forcing France to hint strongly that it would take the unprecedented step of refusing to agree to the accreditation of the first part-time ambassador anyone had ever tried to send the EU. It also ended Dion’s methodical “charm” campaign for the Security Council seat, and many precious months went by before it would begin again.

This government is deeply in love with the idea that it can only handle one problem at a time. It seems to view this as some kind of virtue. Its excuse for the SNC-Lavalin mess has always been that “everyone”—read, Katie and Gerry—was busy saving NAFTA. Similarly, Canada had no foreign policy during the year it was trying to figure out Trump’s.

The deeper commitment to peacekeeping that was supposed to be Canada’s ticket to the Security Council—Coulon had concurrent responsibility for peacekeeping policy and the Security Council campaign in Dion’s office—went by the wayside. Trudeau was amazed to learn that people in dangerous places sometimes have guns. So in the end Canada was reduced to sending helicopters to ferry other countries’ soldiers into and out of the fights. I know you’ll be as surprised as I was to learn this didn’t go over well. If you want to know how seriously anyone in that government takes any of this mess, all you need to know is that Harjit Sajjan is still the defence minister.

Canada does good things in the world. That they are not wildly better than the things Canada was doing in 2010 or 2005 or 2000 should not surprise anyone. That they are not particularly better than the things Ireland and Norway does should not surprise anyone. In the last few weeks reporters were getting a few emails a day summarizing, uselessly, Trudeau’s phone conversations with various leaders of countries he’s never seen and never will. I was going to write about how terrible some of those leaders are, but of course that’s none of Trudeau’s fault. The world is a rough neighbourhood. But people in a rough neighbourhood can usually tell when they’re being played for suckers, and they don’t like to be taken for easy marks.