Andray Domise: It wasn't last week's Trump/Biden debacle, but the surreal VP debate reflected almost nothing of the world outside the debate hall 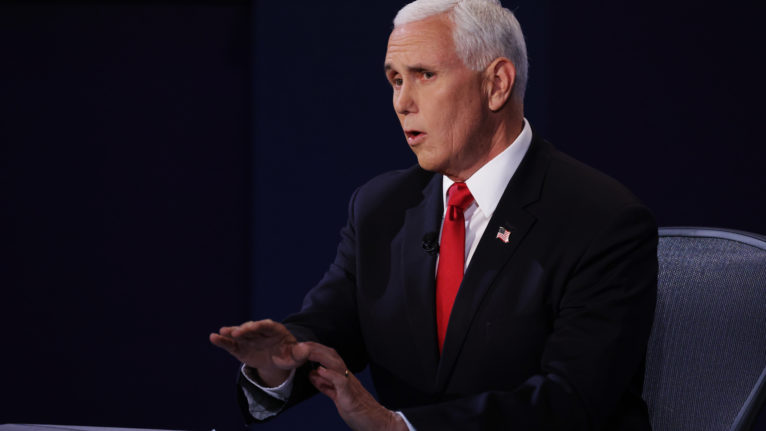 Pence participates in the vice presidential debate at the University of Utah on Oct. 7, 2020 in Salt Lake City, Utah (Alex Wong/Getty Images)

At the end of Wednesday night’s vice-presidential debate at the University of Utah, after Kamala Harris and Mike Pence bade their farewells to moderator Susan Page from behind their plexiglass shields, a surreal moment happened. The camera viewpoint switched to the hundred or more audience members, some masked, others unmasked, as they rose from their seats and filed out the exits. Although the number of audience members was far below capacity, the fact remained that dozens of people had sat for hours in an enclosed space, within a university campus that has recently fielded so many active COVID-19 cases that classes were moved to online-only until mid-October.

Which raised the question: did the plexiglass dividers before the candidates serve a practical purpose or were they mere theatre?

Much could be said of the substance of the debate itself. If one were watching in the hope that either candidate would clearly articulate their vision for ushering America out of its current existential gloom, it was a futile hope indeed. All of the trappings of a debate were there, but what purpose was served on that stage? With Pence either ducking questions or buffaloing into Harris’ allotted time to rebut points that she hadn’t yet formed, Harris either wavering between vague outlines of Biden’s platform or gently coaxing Pence to following the agreed-upon debate rules, and an exasperated Page struggling to maintain control over the proceedings, this was certainly not one for the record books.

Which is not to say the entire exercise was futile. For one, Mike Pence has rarely had to face the pressure of owning Donald Trump’s catastrophes. Pence has none of Donald Trump’s crassness or bombast (or, for that matter, viral load), but he does share the president’s propensity for audacious lies. His early attempt to paint Harris and Biden as “undermining” America’s faith in an end to the COVID-19 disaster landed sheepishly, as did his halfhearted attempt to run interference for Trump’s recent tax debacle. Even at his liveliest, Pence was either fighting on culture war territory (staunchly asserting his anti-abortion politics before veering into a paean of judge Amy Coney Barrett) or ascribing radical eco-socialist politics to Biden and Harris that, if they did indeed share them, would have Bernie Sanders’ supporters turning out to the polls in droves.

On the other hand, Harris had an opportunity to articulate the case for a Biden presidency, which could only coast so far on lingering anti-Trump sentiment, and for the most part, failed to do so. There was no clarification of a Biden/Harris health policy that commits to a free COVID-19 vaccine, or an end to GoFundMe drives as a backstop for the gaps left by the profit-driven insurance industry. While Pence squirmed his way through the question as to whether climate change is an existential crisis, Harris at first touted Biden’s climate change plan, then immediately found herself in a squabbling match over whose ticket was more staunchly in the corner of the fracking industry.

While the vice presidential debate was a far cry from last week’s utter Trump/Biden debacle—at times it was downright congenial between the two—the utter normalcy of the debate reflected almost nothing of the world outside the debate hall, or even the reality within it. Two candidates jousting over the leadership of the world’s most teeming plague colony, making no concrete commitments to the future, while at least one audience member’s hacking cough pealed off the auditorium walls.

In other words, the debate was of a tone that Americans might have needed, but a substance they certainly didn’t deserve.