Opinion: A roast at the White House Correspondents' Association Dinner has provoked division and outrage—and that's exactly what Trump wants 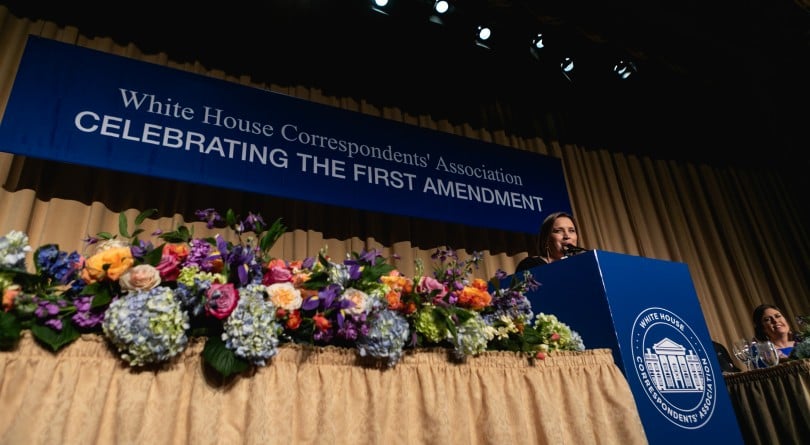 White House Correspondent Association President Margaret Talev speaks at the White House Correspondents' Association (WHCA) dinner at The Washington Hilton in Washington, D.C., on Saturday, April 28, 2018. The 104th WHCA raises money for scholarships and honors the recipients of the organization's journalism awards. (Photo by Cheriss May) (Photo by Cheriss May/NurPhoto via Getty Images)

Nothing crystallizes the current polarization of U.S. culture more clearly than the fallout from this weekend’s White House Correspondents’ Association dinner in Washington, D.C.

The annual black-tie extravaganza, where a coterie of politicians, journalists, and celebrities come together for a night of boozing and no-holds-barred roasting, is the marquee event of the D.C. social calendar. It’s also the gathering that sparked Donald Trump’s presidential ambitions after he was pilloried over his birther obsession by one Barack Obama, so while they may seem trivial, these black tie events sometimes do matter.

The night’s barbs are meant to be in good fun, but here’s the thing: they only work when everyone wants to be in on the joke. What the Washington establishment misses with its criticism of the Trump administration on U.S. political journalism’s big night is that the only thing Trumpland wants from journalists is their anger.

And if a quick scan of my Twitter feed is any indication, Trump can say “Mission accomplished.”

Much of the controversy centred on comedian Michelle Wolf’s takedown of White House Press Secretary Sarah Huckabee Sanders. “I actually really like Sarah,” Wolf said. “I think she’s very resourceful. Like, she burns facts, and then she uses the ash to create a perfect smoky eye.”

This bog-standard jab—along with another equating Sanders to Aunt Lydia from The Handmaid’s Tale—was quickly spun into an all-out attack on Sanders’s appearance by the well-oiled right-wing media ecosystem.

“Tonight’s (White House Correspondents’ Dinner) was a disgrace,” summarized Sean Spicer, a man who knows of what he speaks, having (not coincidentally) penned a book chronicling his own lack of grace while serving as Sanders’s predecessor.

It hardly matters that Wolf didn’t actually attack Sanders’s appearance, that Sanders routinely bends the truth to serve a bent president, or that the president himself has said much worse about other women; there’s no point bringing logic to this partisan party. Both sides wanted an excuse to hiss at each other and got one, but only one side will come out a winner. Hint: it’s not the one that reports for a living.

That there are jokes to be made about this administration isn’t in doubt. The rise of Trump has been an absolute comedic and journalistic gift to two industries in need of a revival. If you can’t skewer or scoop this administration you probably couldn’t hit water if you fell out of a boat. It’s the overzealousness that’s the problem—the mad dash to shoot the many Trump fish in the Beltway barrel obscures the fact that the president has the press over a different one altogether. Every time the media shrieks, more Americans go deaf to their president’s faults.

The fact that the president stayed away in favour of a rally to his faithful in Michigan should have been the clue that the establishment’s clubby night was just feeding more raw sludge directly into Trump’s “swamp.” But his absence didn’t stop the gown-and-tuxedo crowd from taking the bait and holding up the mirror to love what it saw. Depending on which tribe you belong to, Wolf’s headline roast was one of two distinct things: a much-needed colonic for an administration packed to the gills with s–t, or an affront to decency.

That division is exactly what Trump wants. His supporters don’t live in fear of establishment criticism—it sustains them. And the louder and more strident, the better for the rresident: He needs the stark divide between “us” and “them” to survive.

Memo to the media: this president, even though he craves your adoration and validation, will never respect you, because what you’re taught to do is hold corrupt and venal men like him to account. Doing your job properly means the president will no longer have his, so don’t expect any applause from 1600 Pennsylvania Avenue.

Yes, the president will continue to attack you and your profession. Yes, that’s corrosive to democracy. But no, you shouldn’t whine about it, because everyone that cares about the press is already on your side, and those who aren’t don’t read or watch you. You’re not even preaching to the unconvertible.

So stop complaining. Stop apologizing. Stop making yourself the story. Stop inviting celebrities to your annual tongue bath and do your jobs. If the president says something heinous like the Special Olympics are “tough to watch,” report it—but do us a favour and skip the banner headlines and nine hours of subsequent panel “analysis” on cable news. Show, don’t tell.

Or better yet, listen to Michelle Wolf, who also said the following:

“(The press) are obsessed with Trump. Did you used to date him? Because you pretend like you hate him, but I think you love him. I think what no one in this room wants to admit is that Trump has helped all of you. He couldn’t sell steaks or vodka or water or college or ties or Eric, but he has helped you.

“He’s helped you sell your papers and your books and your TV. You helped create this monster, and now you’re profiting off of him. And if you’re gonna profit off of Trump, you should at least give him some money because he doesn’t have any.”

Of course, Wolf isn’t saying any of this because she gives a toss about democracy or the press. Or because she wants to heal the sores caused from the friction between the president and the press corps. No, her motives are much closer to home: a new show on Netflix that debuts in May.

It turns out the real winner when two tribes go to war are those looking to make a buck.