The world needs social democracy now, more than ever

Ed Broadbent: Just as a better world emerged after the Great Depression, we now have an opportunity to create a country that works for all Canadians. Here's how to do it. 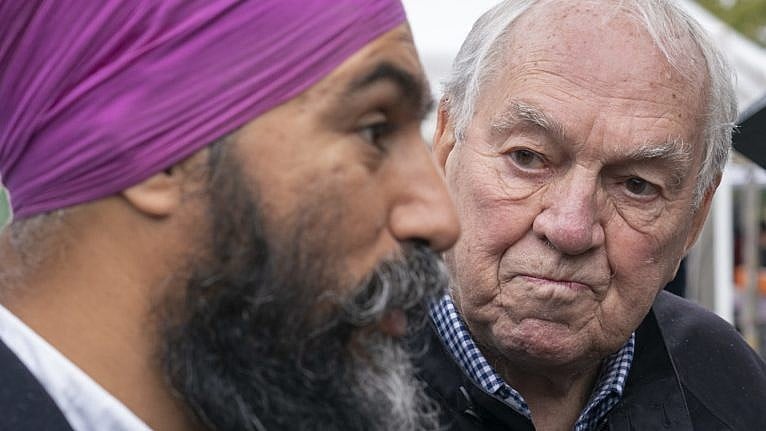 Broadbent listens to NDP leader Jagmeet Singh as they tour a farmers market in Ottawa, on Oct. 6, 2019 (CP/Paul Chiasson)

As the world struggles back to its feet after the deadly COVID pandemic, there are lessons to be learned—and inspiration to be derived—from our past.

In the wake of the Great Depression, people and their governments began to put in place the social systems that support our quality of life to this day. In Canada, and around the world, it was a relatively new political movement—social democracy—that led this charge. In the U.K. and Canada, public health care was established. In the U.S., Roosevelt’s New Deal constructed badly needed infrastructure, produced millions of jobs, and established the right of workers to a trade union.

In the same way that previous generations built a better world coming out of the devastation of the 1930s, we now have an opportunity to create a country that works for all Canadians.

The crises we face—whether unequal economic outcomes, racism and discrimination, climate change and environmental degradation, and declining democratic participation—require for their resolution an activist public sector and a strong civil society. While working with a market-based economy we must avoid a market-shaped society.

In thinking through the critical and complicated work ahead, Canadian social democracy should adhere to the following six principles for ongoing action:

Furthering economic and social rights in addition to political rights.

Social democrats believe that people’s rights are not confined to the traditional, though critically important, civil and political rights but also encompass being able to live a life of dignity, a life free from poverty and with access to essential services. It is for this reason that Canadian social democrats have always been at the forefront of expanding rights to include social and economic rights. We have led the struggle for comprehensive health care as a right, with the latest iteration of this multi-generation fight being the campaign for universal Pharmacare.

Creating a green economy that leaves nobody behind.

Climate change is an existential crisis. As the world’s economy decarbonizes over the next few decades social democrats must ensure that this process results in good new jobs, and that those in polluting industries receive a “just transition.”

Lasting societal change can only come about through harnessing the creativity and power of social movements and ensuring progressives are elected so that they can govern for the common good. Social democrats, therefore, work tirelessly for change in and outside of election periods.

Workplace democracy including the right to a trade union and the fundamental role of the labour movement.

The trade union movement is one of the few democratic forces with the heft to push back against the excesses of capital. As such, unions are good for our entire society not just for their members. As workplaces change it is more critical than ever that workers have access to basic necessities like paid sick days to make possible a life of dignity. Social democrats should also make room for other forms of economic democracy such as cooperatives.

The dismantling of structural systems of oppression.

We need to actively dismantle historic and ongoing structural barriers—including but not limited to racism and sexism—that prevent people from having a life of dignity and realizing their full rights. The rise of right-wing populism, and its attendant bigotry, has made the moral case for stamping out white supremacy clearer than ever. The need to address the persistent wage gap and undervaluing of care work and other gendered work was emphasized by the pandemic.

Fully implementing the rights and title of Indigenous peoples and supporting their goal of achieving self-governance.

Canadian social democrats proudly stood in partnership with Indigenous leadership to insist on the inclusion of s. 35 in the Canadian Constitution Act, to recognize and affirm the inherent and comprehensive rights of First Nations, Inuit and Métis people in this country, including Aboriginal rights, treaty rights, charter rights and human rights. With Canada and some provinces now moving to enshrine the UN Declaration on the Rights of Indigenous Peoples in law, this is the decade to resolve underfunding of essential services and to finally make good on repeated failed promises.

For over a century, social democracy has aspired to create a better life for all. We have made some progress, but much remains to be done and COVID has clarified the challenge before us. Do we recreate a status quo that left too many people behind, or do we repair the holes in our society that the pandemic has so clearly revealed? We know what the answer must be.