There is no excuse for mispronouncing Jagmeet Singh’s name 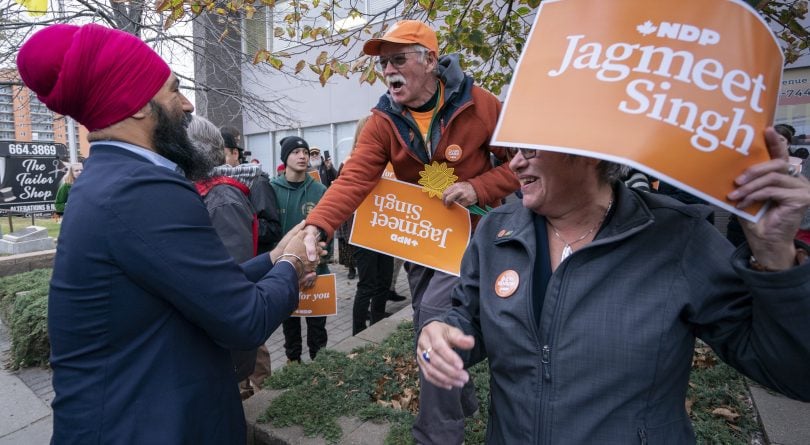 NDP Leader Jagmeet Singh greets a supporter as he arrives for a rally in Saskatoon on Oct. 4, 2019. (CP/Paul Chiasson)

Twitter only allows for a short bio, so users have to get right to the point. In the lead up to the federal election, Justin Trudeau’s Twitter bio identifies him as a “father, husband, and Liberal Party leader, 23rd Prime Minister of Canada.” Andrew Scheer is described simply as “Leader of Canada’s Conservatives and Leader of the Official Opposition.” Elizabeth May has a combination of personal and professional details: “Leader of the, Candidate for Saanich-Gulf Islands, activist, author & mother.” But Jagmeet Singh, Canada’s first non-white politician to lead a major party, introduces himself in a decidedly different way.

“Pronounced Jug(like hug)-MEET!,” reads the first line of Singh’s official Twitter account, before also indicating that he is the leader of the NDP.

It’s an opening line that is all too familiar for those with non-white sounding names (my version is “Ishani, like Ashanti, but not”). This type of intro is developed in response to a lifetime of repeated mispronunciations, which often starts at school and then trickles into the workplace. Yet, despite providing clear instructions, many people, including some reporters, still can’t seem to get Singh’s name correct, and it’s inexcusable.

MORE: A father’s letter to an infant daughter: “I wanted my last name to be a burden” 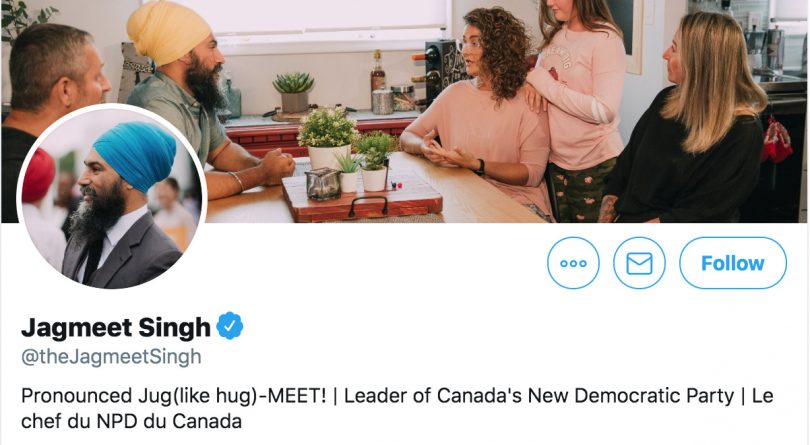 I’ve personally heard my name altered in every possible way from Ishnani to Isahni to Ashani, both in-person and over email, the latter which is particularly baffling given that in order to send me a message, my name had to be spelled correctly in my email address. Sure, like Singh, I typically go through the aforementioned process of instructing people how to say my name. But sometimes, I just let it slide because I don’t want to have the conversation. That type of response, prioritizing the comfort of others while having to explain and justify your identity, is what Singh has had to do this entire campaign, with everything from media questioning “whether Canada is ready for a PM with a turban” to his recent encounter with a racist in Quebec.

The white man in the video told Singh he should remove his turban to “look like a Canadian” and appear  “normal like us.” This racist statement reflects that many people still cling to a certain idea of what makes a Canadian, which has nothing to do with citizenship or heritage. In the same way, each mispronunciation of “Jagmeet” sends a clear message: you are different. Names are literally the forefront of our identities and when people don’t take the time to get it right, it is a subtle rejection of who we are.

In fact, Singh has made this point himself, tweeting in 2014: “Our first level of identity is our name. Let’s honour it by pronouncing it right.”

Years ago, when I worked as an ESL teacher, I was once asked, "What's a typical Canadian name?" My reply: "I dunno. Tremblay? Smith? Wang? Singh? Cohen? You tell me!" Good for Jagmeet Singh in his reply! https://t.co/T2zwz3rrde

During Glamour magazine’s The Girl Project, Orange is the New Black actor Uzo Aduba described a similar experience growing up as one of the few Nigerian-Americans in a small New England town. When she told her mother she wanted to change her name to Zoe because people kept tripping over her name, her mother responded by saying that if people could learn to say Tchaikovsky, Michelangelo and Dostoevsky, they could learn to say Uzoamaka (her full name).

Hasan Minhaj made a similar point during an interview on The Ellen DeGeneres Show explaining that everyone from CNN to DeGeneres herself were saying his name incorrectly. “If you can pronounce Ansel Elgort, you can pronounce Hasan Minhaj,” he said. Put in the Canadian context, if people can learn to say Jean (not as Gene but in the correct French-Canadian pronunciation of Jean Chrétien), then why is “Jagmeet” so difficult? It seems that it’s not so much the combination of letters and sounds that is the challenge, but often unconscious bias that exists against non-white names.

As Singh goes through what is essentially the most pivotal job interview of his career, it’s pertinent to note that names alone have been shown to shape people’s perception of an applicant, before considering their qualifications or ideas. Study after study after study has demonstrated the inherent bias against job candidates with non-Anglo names in Canada. That’s not to say that if Singh doesn’t do well in the election, it is because of his name, but rather to point out that his name may influence how Canadians perceive him in a way that doesn’t apply to Justin Trudeau, Elizabeth May and Andrew Scheer.

is it really that hard for media/commentators to learn how to pronounce "Jagmeet Singh"?

Back in 2017, when Singh first became the leader of the NDP, Toronto teacher Roopa Cheema, who like Singh is a Punjabi Sikh, kept hearing well-meaning supporters mispronounce a name that was familiar among her community. In response, she tweeted her own set of instructions for how to say “Jagmeet.” Cheema notes that names are particularly important to the Sikh faith and identity, where all Sikh men are given the name Singh and all Sikh women given the name Kaur. “There’s so much tied into what our names are, so they should be said properly,” says Cheema. “And it’s not a hard name to pronounce, so why is everybody getting it wrong?”

Cheema, who has studied anti-oppression and anti-racism and now trains others in these areas, says that it doesn’t bother her when people read Jagmeet’s name and then say it incorrectly, given that the pronunciation isn’t phonetic. What gets to her is the media’s mispronunciations. The lack of diversity in Canadian newsrooms—and in particular during the election campaign—is coming to light, and the fumbling of Singh’s name feels like yet another consequence. As journalists, it is our job to report the truth, and to get it right. People’s names are not exempt.

Canada prides itself in its multiculturalism, but hearing reporters refer to Singh as “JAGmeet” is yet another reminder that as the first non-white leader of a major party, Singh faces challenges that his opponents don’t.

“It’s just like me as a teacher,” says Cheema. “If I don’t spend the time learning the names of my students, it makes them feel invisible. And I’m sorry, but Jagmeet is not invisible right now, he’s hyper-visible and the amount of bull he has to put up with because of his appearance is dehumanizing. So whatever we can do to humanize him, we have to do; it’s our responsibility, especially in Canadian media.”