There won't be a seasonal second wave of coronavirus, there will be a behavioural one

Tim Sly: To anyone enthusiastically lugging a two-four of lager toward a beach party, the message is probably being missed—this is not the 'end' of anything 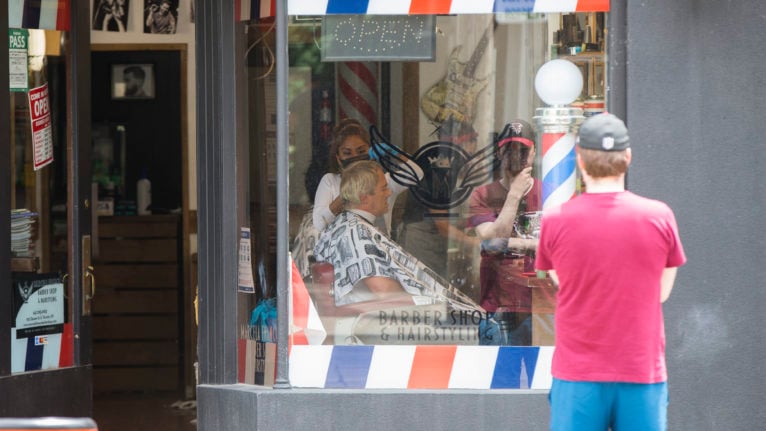 A hairdresser wearing a face mask cuts a man's hair at a hair salon in Toronto, Canada, on Jun. 24, 2020. (CP/ZUMA Wire/Zou Zheng/Xinhua)

Your favourite restaurant patio, bar and campsite may be available as part of the phase three of the coronavirus re-opening in this country, but I ask: Is it time? Are we lifting restrictions with too much haste? The camping analogy is apt: A bone-dry forest floor; strict prohibition of camp fires, smoking, and matches has eliminated all sources of ignition. Have we won that battle? Not on your life! Ninety-five percent of that forest is ready to burst into flame in an instant, should some careless camper or transient trucker drop a single match.

The absence of cases is an accomplishment but it’s not a glimpse of light at the end of a grim pandemic tunnel. It’s barely more than a return to the vulnerable position we were in before the first cases arrived on our shores. More than 95 per cent of Canadian population is completely susceptible to the virus, and that virus is still circulating—not just in major urban areas.

I was speaking with folks at a radio station in Saskatchewan a short while back. They were clearly pleased at having the lowest number of cases of any of the border provinces, and were anxious to get back to “normal”.  Within days, four cases were reported, not in a larger city, but in the tiny northern community of La Loche (population 2,300). After 10 days, 38 clinical cases were reported with probably many more asymptomatic infections, and 6 deaths. Like I said, it takes one match.

Kingston was among the few cities in Ontario that had experienced no deaths and only 63 cases since January, with only two cases reported in all of May. But early in June soon after certain businesses were allowed to open, 25 cases appeared, all traced to a hair and nail salon.

To anyone enthusiastically lugging that two-four of lager toward a beach party, the message is probably being missed: this is not the “end” of anything. Cases can be expected to erupt about a week after any public event exactly as it has in vast areas of the southern United States. The more people attend, sans distancing, sans mask, the more we can expect a proportion of those revellers to experience symptoms a week later, and a smaller proportion to be admitted into hospital a week after that. A few will die after 20 days of being hooked up—unconscious—to a ventilator, and those that do make it out alive may have to endure kidney disease, lung damage, or neurological issues indefinitely.

As I write this, the recently-opened-up United States has just shattered its single-day record for new recorded cases—more than 76,000, according to a New York Times database. The previous daily record—65,000 cases—was announced the day before. Florida alone confirmed 15,000 cases in one day, clearly a long way from anything resembling a controlled, ordered resumption of normal life. Helen Branswell, senior science writer for Canadian Press calls this a “raging dumpster fire”. By comparison, Canada looks almost unblemished, but we are still in 21st position out of the World’s 215 countries in terms of having 234 deaths per million in population, considerably higher than Germany with 105 deaths per million. Oh, and the States? Tenth position with 431 deaths per million.

MORE: The unmasking of Donald Trump

Clearly, the Canadian population needs to be let out for fresh air, social interaction and gainful employment, lest all manner of sinister maladies—physical, social and psychological—beset us. But how do we manage this while keeping the transmission low? As stay-at-home restrictions are lifted, professional and social interactions will inevitably present more opportunities for spread of COVID-19.

The rules have to be logical, sensible, and adapted to the time and location. The risks of resuming bar service in Manitoba or New Brunswick may be associated with somewhat less urgency and anxiety than the equivalent réouverture in downtown Montréal. But the key to avoiding the disaster, disease,and death should be increased caution and enhanced protection. Wearing of masks and social distancing is now more important than ever. Re-opening must be done slowly, carefully and prudently.

We know that none of the interventions are 100 per cent effective, but masks do protect. Recently, 139 clients were unknowingly exposed to two symptomatic, virus-positive hair stylists in Springfield, Missouri. Both the stylists and the clients wore face masks following community and company policy, and this is probably the reason no symptomatic secondary cases were reported. Among the 67 clients actually tested for the virus, all test results were negative.

This brings us to the subject of testing. Whether in aircraft, schools or beauty shops, what’s the one element that would help everyone relax?  Surely it’s the knowledge that everyone on board, in the shop or classroom has had a negative viral test in the last few days. Weekly testing of all hospital staff, taxi drivers, nursing home staff and any population where community-based infections are continuing to take place has long been recognized as the way to bring outbreaks to an end, an approach endorsed by epidemiologist Julian Peto at the London School of Hygiene and Tropical Medicine. And this may now possible, thanks to Constance Cepko and colleagues at Harvard Medical School who have developed the reverse-transcriptase loop-mediated isothermal amplification (RT-LAMP for short). Until now, molecular tests for detecting COVID-19 virus mostly employed real-time polymerase chain reaction (RT-PCR) methods that required trained analysts, complex instrumentation, and more than eight hours to process (longer with remote locations).

RT-LAMP is a fast, low-tech test that can be completed without expertise, expensive reagents or complex instrumentations, and it can be done at the clinic or point of care where it is administered in an hour or less. It carries a high degree of specificity (99.5 per cent ) and sensitivity (91.4 per cent), meets WHO requirements, and has been given the green light by the U.S. FDA. The U.K. has just approved population-wide trial, testing the entire city of Southampton using this method. Importantly, the effectiveness of LAMP methodology in the detection the RNA of COVID-19 at significantly low levels has now been confirmed. Such rapid and robust assays for field diagnosis of COVID-19 may well be the way to come to grips with the pandemic.

The U.S., South Korea, Israel, and Spain are facing resurgence and reversal of lockdown, while the U.K. appears to have avoided it thus far. We are almost guaranteed to see some increase in cases once folk return to pools, patios, parties, and other people. There is no evidence of a seasonal second wave; it’s more likely to be a behavioural second wave, driven by desperation to get back to the BBQ and the beer tent.