'This dithering and fearmongering is wrong'

Letters to the editor, Sept. 26, 2019: Readers continue to weigh in on our special climate change issue, class consciousness and that conspiracy-laden mystery island in Nova Scotia 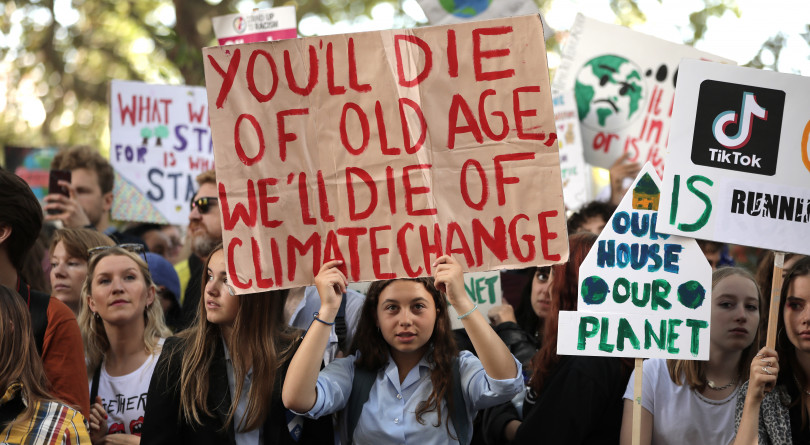 We published a special climate change issue in August that featured stories on Canada’s worst-case scenarios, how we can fight back, and why it all matters so much. Readers wrote often, so we’re publishing more of their thoughtful words.

I profoundly disagree with the sentiments expressed by those other Albertans in their letters to the editor in the online edition of Maclean’s on the climate crisis (“‘Yes, we should be scared,’” Climate Change, August 2019). We are indeed in a climate crisis, and its effects are all around us. We don’t have a choice: we must move rapidly to a green economy, and that means, whether we like it or not, moving out of oil and gas. This dithering and fearmongering is wrong. We have to stop whining and just get at it—and that’s the attitude Alberta is known for, not this Chicken Littleness.
—Collette Oseen, Edmonton

Congratulations: ﬁnally, the climate crisis is getting real attention from a major Canadian publication! Your articles in the August issue provide interesting input from many sources and points of view, and Alanna Mitchell’s piece subtitled “A carbon-free world is possible by 2050” is particularly encouraging. Also the wonderful cartoons by Sarah Lazarovic really hit home. Please keep up the pressure and also tell us what some other countries are doing. As David Suzuki writes, “Climate change should be the highest priority for every politician and candidate and should receive daily media attention.”
—Claire Kerrigan, Knowlton, Que.

The “climate crisis” issue was peppered with words like “terrifying,” “catastrophe” and “apocalypse.” If the editors really believe the situation to be this dire, then they owe it to readers to offer genuine solutions. After reading the issue, one is left to believe that solar and wind power are the solutions. But they are not. Electricity demand varies by only about 20 per cent from peak to trough. On calm nights, solar and wind produce zero power. A backup system, at great cost, would be required to be on standby. The only practical and cost-effective long-term solution is nuclear power (in addition to hydroelectric power). A robust regulatory format and trained personnel are required to ensure public safety. Canada has the ability to create a world-class nuclear power generation system.
—Peter Christopherson, Fort McMurray, Alta.

I sincerely applaud the in-depth and variety of information in the articles related to climate change in your August edition. The magazine was a pleasure to read, as usual, from cover to cover. However, one article stood out for me: the one regarding the new Tim Hortons cup lids. In keeping with the theme of the magazine, I was expecting the punchline to come earlier in the article than at the end, where it’s noted that Sarah King of Greenpeace Canada feels the chain should have launched a mug-share program. The new Tim Hortons lids are here, but who cares? Let’s all bring our own take-away mugs instead.
—Chris Babcock, Calgary

A few footnotes and comments on Alanna Mitchell’s article on achieving a carbon-free world as it relates to passive houses: this is by no means a new concept. One of the world’s ﬁrst passive houses was designed and built in Saskatchewan more than 40 years ago by a consortium of people from various government agencies, industry and the University of Saskatchewan. The article is quite right that these “buildings work because they are airtight and thickly insulated.” The Saskatchewan House used a double-stud wall construction, which enabled a continuous air barrier in the walls. This greatly reduced air leakage. I can testify to the quality of this type of house as I have been living in one for the last 35 years that I designed and built. A heat recovery ventilator (HRV), mentioned in the article, was designed for the Saskatchewan house. It was the ﬁrst of its kind in the world and the brainchild of a colleague of mine, Prof. Bob Besant. The University of Saskatchewan, of which I was a member, later developed a better version that used hard plastic permeated by channels which proved ideal for airflow. A technician with the team, Dirk VanEe, left the university to start a successful company manufacturing this type of HRV for use in hog barns as well as passive houses. Many of the companies manufacturing today’s HRVs still use the same basic construction. The article incorrectly indicates the HRV is used to heat a passive house. The sole purpose of an HRV is to reduce energy consumption by using the stale exhaust air from the house to warm the cold, fresh outside air entering. But the article is correct in implying that energy from sources such as occupants, lights, appliances and solar gains through the windows can provide a very large portion of the space-heating requirements of a passive house. However, a passive house should use energy-efﬁcient lights and appliances that produce little waste heat. This will also lead to a reduction in summertime cooling load.
—Greg J. Schoenau, Saskatoon

In July, Associate Editor Shannon Proudfoot wrote a personal essay that reflected on her working-class roots in a country that often ignores or erases socio-economic lines.

The article on being working class is brilliant (“What does it mean to be working class in Canada?” Education, September 2019). How many of us from the “older generation,” offspring of parents who survived the Depression, have even thought about what it was like to be of the working class? It is deﬁnitely something that I have revelled in telling tales about to my grandchildren. There was a carefreeness on the one hand, and yet we also knew how to work hard to not only support ourselves but also to contribute to our parents’ well-being. I now legitimately enjoy the middle class (I guess), but I also appreciate that my husband and I did work hard to get here. Our parents prepared us for it. Kudos to Ms. Proudfoot for illuminating this situation. Hers is one of the best articles your magazine has published. And it is brilliant of Prof. Lehmann to have undertaken research on working-class kids.
—Joyce Mylymok, North Saanich, B.C.

In August, Stephen Maher wrote about a tourist hotspot in Nova Scotia where centuries of folklore have claimed buried treasure lies beneath—and centuries of trying has unearthed none of it.

Interesting story by writer Stephen Maher about Oak Island. I have been a pragmatic historian, researcher and enthusiastic observer/interpreter of this story for most of my adult life. I always maintain that you do not have to believe there is a treasure buried at Oak Island, but as a visitor you should be amazed at the fascinating history and passion with which treasure hunters have descended upon the island’s scarred old hide. Six people have died, fortunes have been squandered, and it remains a mystery like no other. Skepticism should be employed when reading online stories and about the machinations of theorists, but I wonder how many skeptical people have read one of the better-known and reliable books on the subject or if they simply refer to online sources to develop an opinion. Never rely on Hollywood to offer a very clear picture of history—they want to entertain. Come to Nova Scotia, take a tour, listen to the history, hear a presentation, visit a museum (there are two) and then tell me the story of Oak Island does not make you want to get a pick and shovel and start digging.
—Danny Hennigar, Curator, Explore Oak Island Display, Chester, N.S.

Really, Maclean’s! Having Paul Wells write the piece on the Liberal campaign director? You are letting your bias show again. The proﬁles of the other party directors were excellent—a bit of personal history, background in politics, why they do what they do and their objectives. However, Paul Wells is simply unable to be objective, and you have done a disservice to both the Liberal party and Mr. Broadhurst with this “proﬁle.” With Mr. Wells’s snide remarks and insulting references to past leaders, and his overt dislike of the Liberal party and Mr. Trudeau, why would Maclean’s ask him to write this article?
—Dianne Powell, Wentworth Station, N.S.

Donald Trump has exposed many flaws in the American government model. And, true to his history, he has exploited most of them. In addition to using Scott Gilmore’s list, Americans may also want their CEO to have, if not direct experience in government, at least an understanding of the constitution and the purpose of the institutions of government. It is not an entry-level job.
—Glenda Komenac, Elkford, B.C.

Scott Gilmore missed the most important reckoning in his proposals for the “Trump Prevention Act.” I had mentioned a proposal to a friend who owns a manufacturing company in Wisconsin to prevent high-level corruption by politicians. I suggested my idea might start with big business. The idea: screen high-level appointees for psychopathy. This would clean up much of the dirt in business and politics. There are now reliable and objective methods of testing for psychopaths—it works, and they can’t cheat their way through the tests. I suggested that if big business adopted this approach, with luck it might ﬁnd its way into the vetting process for high public ofﬁce. If we weaned out the psychopaths from high ofﬁce, most of the other Trump Prevention policies of Scott Gilmore would be unnecessary. Honest people do honest things.
—Murray Allen, Kelowna, B.C.

Interesting suggestions, but I think Mr. Gilmore’s column misses the crucial issue: the Trump presidency exposes a potentially catastrophic limitation of the U.S. Constitution. While the president is protected from prosecution in the criminal justice system, the constitution provides for prosecution (impeachment) of the president only by the Congress. The result is that prosecution of crimes (obstruction of justice, emolument, etc.) is political, not judicial. A president can be guilty of the worst crimes, but if he or she has popular support, and/or party support, he or she will not be tried, let alone removed from ofﬁce. In these hyper-partisan times, let us not forget that Hitler had popular support.
—Bill Bowden, Southampton, Ont.

In June, Senior Writer Anne Kingston wrote about how human kindness—and resurgent empathy across the globe—is the only solution to a broken world.

Anne Kingston and Maclean’s deserve great thanks for the cover story on compassion. However, there may be a more direct and effective way to ﬁnd compassion than by reviewing the academics, TED talks, legislation or business strategies discussed at some length. Finding compassion could be as simple as getting out of Ontario and its preoccupation with prosperity. Here in the Maritimes and Atlantic Canada, shipwrecks, mining disasters, hurricanes and air crashes have elicited compassion for hundreds of years. Indeed, this compassion continues daily. Our volunteer ﬁre departments and search-and-rescue teams respond to anything and everything where they can be useful—and all of us keep donating to them whether we get tax credits or not. Whether a Syrian refugee family loses seven in a house ﬁre in Halifax or a 25-year-old volunteer ﬁreman perishes on his ﬁrst motorcycle ride, our community responds with the compassion your article called for. You might already know of Maritime compassion given the number of people who have taken notice of the musical Come From Away, which tells the story of the Gander, N.L., response to the planes grounded there on 9/11.
—Ernest J. Dick, Granville Ferry, N.S.