This election brings 4 important changes to America and the world

Scott Gilmore: While votes are still being counted it is already clear that America's dangerous politics and its declining place in the world are the new normal 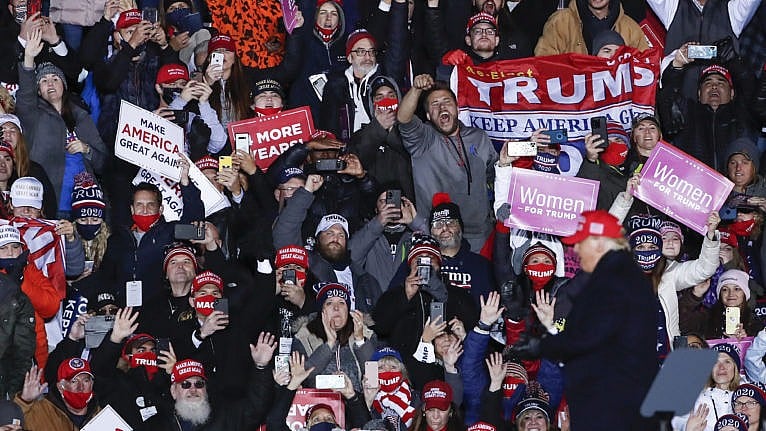 Supporters react as Trump leaves the stage after speaking during a rally on Nov. 3, 2020 in Grand Rapids, Michigan (Kamil Krzaczynski/Getty Images)

It’s a different world today—albeit not the world many expected. Democrats did not get the landslide they predicted. And, for many on the conservative end of the spectrum, they did not see the Trump victory they were sure was on the way.

Millions of votes have yet to be counted. And, armies of red and blue lawyers are sharpening their pencils. The election is not over yet. But, if we can assume what now appears to be the most likely outcome—a narrowly won Biden Presidency and a Republican Senate—we can make a few safe predictions about this new world we woke up into.

First, even though Biden may be headed for the White House, international allies remain rattled. For 80 years the western alliance could count on a steadfast America. NATO, the WTO, and much more was built on the unassailable assumption the United States, regardless of who was in power, would always support a multilateral system, a strong trans-Atlantic alliance, and broad support for democracy and human rights around the world.

Trump’s unexpected arrival and his subsequent attacks on allies and embrace of rivals disrupted all of that. But policy makers from Berlin to Ottawa assumed this was a detour, that America would revert to the norm once Trump was gone. Last night made it clear that Trumpist foreign policy ideas are widely supported in the United States, and the next GOP candidate may pick up where Donald Trump left off.

Even the possibility that another isolationist could be elected in 2024 is too alarming for America’s allies to ignore. The ad hoc policies and strategies adopted by western powers to “work around” Trump will become permanent. Instead of an international system that depends on the United States, we will see the solidification of an alliance that firewalls the United States. You can be sure that in Ottawa, Canadian diplomats and political leaders will be asking themselves, “How do we insulate ourselves from another chaotic political oscillation in four years time?” The answer to that question will be a very different foreign policy than we have seen before—and a much diminished role for America on the global stage.

An equally important change: Democrats will continue to lose faith in the democratic system they have long championed in the face of Republican rule-breaking and Supreme Court packing. To paraphrase the recently departed Sean Connery, the Dems will decide you don’t bring a knife to a gunfight. Expect even mainstream Democrats to argue it is time to adopt the Republican playbook, even if it is anti-democratic, norm-breaking, and patently unfair.  For better or for worse, the underhanded tactics so successfully deployed by Roy Cohn, Newt Gingrich, Mitch McConnell and Donald Trump will be embraced by the left. While this may help the Dems in the short term, the health of American democracy will suffer badly as a result.

Where does that leave the next American president? Even if he relies on dirty tricks, Biden, should he win, will almost certainly be hamstrung by the Republican-controlled senate. He will be unable to get any major legislation through. Obamacare will not be re-enforced. There will be no democratic reforms. Budgets will be blocked. The government will suffer through shutdowns. Foreign policy will be constrained. And there will be endless investigations into scandals real and imagined. The Republicans honed their disruptive skills with Benghazi-gate and will immediately inflict the same pain and more on Joe Biden, likely starting with his son.

Finally, we can expect Republicans to embrace an already emerging narrative that echoes the south’s Lost Cause mythology. In that case, the defeated Confederates cultivated an anti-historical belief that their cause was a just one and was only defeated because of northern aggression and betrayal. Likewise, the Trump Presidency will be elevated and ennobled, Trump’s accusations of fraud and conspiracy will be believed, his loss will be seen as a theft, and the Democratic governments in Washington and elsewhere will be labeled illegitimate, un-American, and even treasonous.

As a result, any prospects that a Biden presidency could heal the partisan divide are gone. Resentment will grow. The gap between red and blue Americans will widen. The Union will be weaker than at any other time in the last 150 years.

At home and abroad, this new different world will be a difficult one for the one United States of America.