This mail-hoarding postal worker is a hero for our times

Shannon Gormley: Doesn’t the mail drive everyone, including its recipients, postal? If the mail stopped coming for just a little while, it wouldn’t be a tragedy. It would be a snow day. 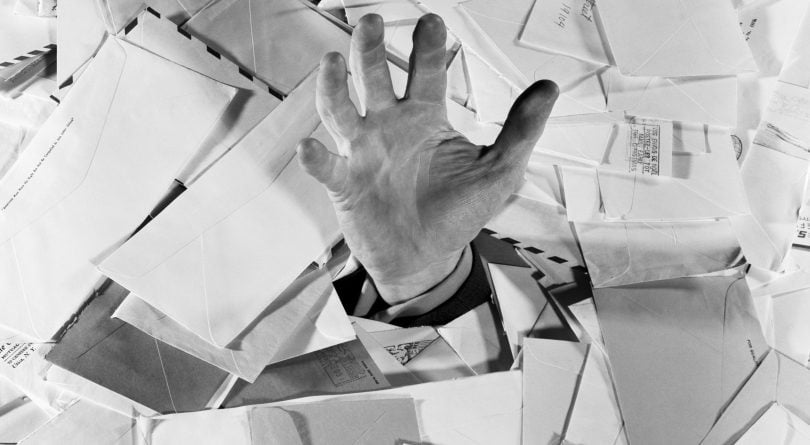 We're drowning in a flood of mail and email. Who can read it all? (H. Armstrong Roberts/ClassicStock/Getty Images)

In news that would bring my dog great joy, police in Japan are considering laying charges against a postal worker who had hoarded 24,000 pieces of mail in his home. When asked why, the man said that delivering it was “too much bother.”

I like this man. I know I shouldn’t like him, so to all those poised to write angry letters—letters that may or may not take a lifelong detour through some mailman’s attic—yes, it’s true: mail hoarding is bad. It’s wrong to withhold tens of thousands of letters to prospective wedding guests, or the recently bereaved, or Santa. But wouldn’t you?

In the immortal words of the great postmodern philosopher, Newman of Seinfeld: “The mail never stops.”

READ: ‘I signed up to be a mailman, to deliver Christmas cards. Not fentanyl’

The Royal Mail, like many social ills, can be traced back to Henry VIII. Ancient Egyptian pharaohs were the first to send letters—these were delivered in boxes escorted by guards, which seems classier than the way we do it. Neither king nor pharaohs could have foreseen that centuries later, in a place called Michigan, a person called a pest control worker would find 15,000 pieces of undelivered mail in a postal carrier’s home; or that in Italy, a mailman would keep 1,100 lb. of mail in his garage; or that when a postal worker in Honolulu died, he would leave behind a storage locker stuffed with a thousand letters. But they might have been relieved to hear that, in Brooklyn, a mailman who said he was overwhelmed with the 17,000 pieces of mail stashed in his apartment and Nissan Pathfinder would promise officials that he had delivered the most important ones. Between 2018 and 2019, 440 U.S. Postal Service workers were arrested for mail hoarding and theft.

Most people who hoard mail do so to avoid it, rather than steal it. Some seem otherwise healthy. If mailmen are often called crazy, I think it’s a safe bet the mail made them so. The expression “going postal” originated around the 1990s after a succession of postmen with guns went berserk; one must concede that if a postal worker is going to go postal, then that energy is better channelled into furniture-catalogue theft than murder.

Besides, doesn’t the mail drive everyone, including its innocent, unsuspecting recipients, postal? If the mail stopped coming for just a little while, it wouldn’t be a tragedy. It would be a snow day. It’s indisputable that as a method of communication (and newsmagazine delivery), the mail is vital; equally indisputable is that we hate it. What kind of sick person wants to get brochures from 17 different real estate agents every month? How often are we selling our houses? Is anyone fooled by our dentist wishing us happy birthday? Is it nice, once in a while, to be given the merciful opportunity to honestly say: “I don’t know, the cheque must have gotten lost in the mail”?

If it’s true that the mail is crazy-making, surely this has never been more true than today. We’re all hoarding more digital mail than any human being was ever created to see. We spend roughly a third of our workweek on emails, but since emails only have about a 30 per cent average open rate across all industries, you have to assume that most of that time is spent with our eyes boring a hole through our computers, our brains erupting in a silent scream.

“Sorry, busy week!” we’ll say when harassed, before we return to harassing others for more emails that we don’t want, forever trapped in a system premised on the idea that the ability to send a message entitles one to a reply. Of course, no one is too busy to reply to an email; sometimes, we just can’t be bothered. Sometimes, we’d just prefer to have a good stare at a wall. I wonder which wall the Japanese postman stared at when he should have been sifting through fast-food brochures.

I suppose we like postal thieves for the same reason we like any bad guy—Danny Ocean, Wile E. Coyote, Jean Chrétien. We all dream of casino money. We all dislike the Road Runner. We’ve all wanted to strangle a . . . well, maybe the prime minister did go a bit far. To see a guy get away with the thing you’re too scared to try—that’s the true meaning of hope. And what on this earth is more inspiring than the exuberant insanity of the person who takes a good look around, compiles every piece of mail within their sightline, and hits “delete”?

Maybe one day we’ll be so brave. Until then, we can go back to telling ourselves that tomorrow we really will open that municipal pet registration form on our dining room table.

In other news, I’ve looked for a comprehensive history of postal workers hoarding the mail, with no luck. I like to think, though, that one has been published, shipped off to bookstores, and now lines the walls of a basement somewhere in hundreds of tall stacks while a few meters above a mailman whistles a little song, walks out of his house, and locks the door.

This article appears in print in the March 2020 issue of Maclean’s magazine with the headline, “A hero for our times.” Subscribe to the monthly print magazine here.