Boston's 40,000-strong response to a planned alt-right rally marks a new nation-wide repudiation of both the Confederacy and racism. 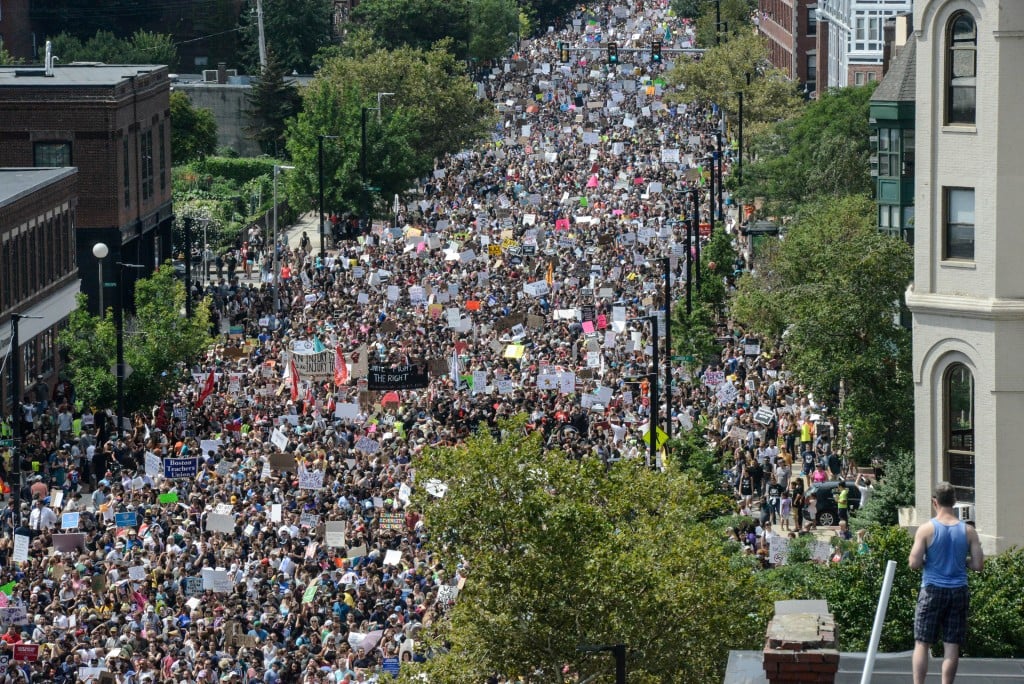 I was supposed to fly to Boston this morning. I bought a ticket, booked a hotel, and set my alarm. But I skipped my flight. I just didn’t want to spend my day with Nazis. Thankfully, thousands of other people were more intrepid than me.

Today the alt-right planned to gather on Boston Common. It was to be their counterpunch after the earlier fiasco in Charlottesville, where a grotesquerie of racists, white supremacists, and neo-fascists clashed with protesters, leading to the death of a young activist named Heather Heyer and the injury of 19 others.

In a remarkably candid press conference that will be remembered as one of the defining moments of his presidency, Donald Trump responded to Heyer’s death by angrily claiming there was blame to be found on “both sides”—among the torch-bearing Nazis chanting for a race war, and among those who gathered to oppose them.

Condemnation of Trump was almost universal, from the government of Israel, to members of Trump’s advisory councils, to the leadership of the Republican Party. Even the president’s chief apologist, Newt Gingrich, disapproved. It was a unifying moment in American politics, and one that marked the first dramatic rupture between a previously prostrate GOP and their president.

The only notable people who supported the president were men like David Duke, the Grand Wizard of the Ku Klux Klan, and a few of the more notoriously rabid members of the far-right press.

There was a voluble consensus that this was a demoralizing low point in American history. But the hand-wringing hot takes and the ominous predictions of a new civil war distracted from the real impact of the Nazi march: a sudden, unexpected, and nationwide repudiation of racism, the Confederacy, its symbols, and its heroes.

North and south of the Mason-Dixon line, mayors, legislators, and members of the general public pulled down Confederate flags, installed new plaques explaining the pro-slavery positions of southern Civil War generals, and covered up other statues—or in some cases, such as in Baltimore, removed them immediately.

Just a few years ago there was a national debate on whether these symbols of the Confederacy, embraced by modern white nationalists, were legitimate expressions of southern pride or racist anachronisms. Maybe because America had other things to worry about, or because a country with a black president couldn’t possible have a race problem, the issue was left unresolved.

But last week, after the president disgraced himself live on TV, the mood suddenly shifted as many Americans decided the verdict was now in—the Confederacy was not a noble defence of Southern values; it was treason.

The verdict was not unanimous. A CBS poll found that 67 per cent of Republican voters approved of the president’s Charlottesville comments, and the removal of statues is being strongly opposed by white voters across the southern states. But nationwide, the balance clearly shifted this week, and the long-fought defence of “southern pride” has become a rear-guard action.

The retreat is not an orderly one. The alt-right, abashed by the vocal bi-partisan opposition to their cause, quickly raised the flag of “free speech” and declared their real struggle is to defend history (by protecting statues of General Lee) and the First Amendment. They chose Boston Common as their battlefield.

This was an inspired place for the fight. Boston Common was cleared 400 years ago by the first settler in the area, an Anglican preacher named Blaxton who filled his cabin with books and named it “The Study.” He sold the land to the Puritans, who used it to graze cattle and hang witches. On the eve of the Revolutionary War, it was the camp for British soldiers who marched up to Concord and fired the first shots that led to American independence. And today, it was where a small band of 50 Nazis had to be escorted to safety through a crowd of 40,000 Bostonians who’d had enough of their shit.

The history of the United States, like Boston Common’s, is complicated, painful, and ugly. But, decade by decade it does bend towards justice. In spite of how it feels, this was a good week for America. In hindsight, I’m really sorry I missed it.