Thomas Tobin can't hide behind the Bible on LGTBQ issues

Michael Coren: 'I would never argue that the Bible blasts support for LGBTQ people, but equally, when we read this collection of books with knowledge and without malice, I believe that it doesn’t condemn it either' 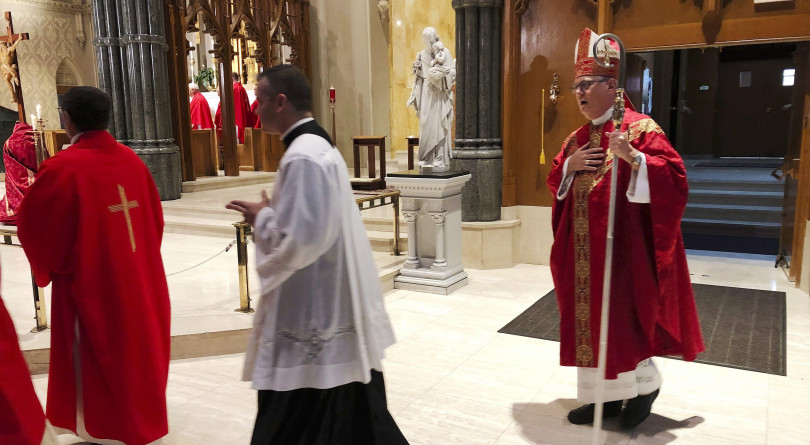 Providence diocese Bishop Thomas Tobin, right, enters the during the processional at the Cathedral of Saints Peter and Paul in Providence, R.I., Friday, Sept. 14, 2018. (Jennifer McDermott/AP)

When I was writing a book about the Christian case for same-sex marriage, I interviewed a number of men who had left the Roman Catholic priesthood due to their homosexuality. They could simply no longer tolerate their church’s baleful combination of homophobic teaching and sheer hypocrisy—their informed opinion was that at least one-third and likely the majority of their colleagues were gay, many of them far from celibate. One man from Toronto told me that during the Pride parade he would remove his clerical collar and walk beside the march, but at least a full street away. “I needed to be part of it, but I was terrified that even in civilian clothes someone would recognize me. You wouldn’t believe the prejudice and the fear that exists.”

Perhaps I would. Shortly after sunrise on Saturday, Bishop Thomas Tobin of the Roman Catholic diocese of Providence, Rhode Island, tweeted, “A reminder that Catholics should not support or attend LGBTQ ‘Pride Month’ events held in June. They promote a culture and encourage activities that are contrary to Catholic faith and morals. They are especially harmful for children.”

READ MORE: If there’s a war on Christmas, it’s being led by the most zealous Christians

This was shockingly repugnant language, even from a church that has actively campaigned against LGBTQ equality and now officially rejects even chaste gay men from its seminaries. The stinging irony of the “harmful for children” comment was inescapable, in that the Catholic clergy abuse crisis involved the sexual assault of myriad children and was denied or hidden for decades. Indeed, when Tobin was auxiliary bishop of Pittsburgh, the diocese was named in a grand jury report concerning abuse and its obfuscation.

The tweet went viral over the weekend, and while 70,000 people replied, most of them negatively, there were more than 16,000 likes, and on Sunday the bishop wrote to acknowledge “the widespread support I have received on this matter.” Seemingly unrepentant, he admitted that the tweet had caused a reaction but emphasized that, “As a Catholic Bishop, however, my obligation before God is to lead the faithful entrusted to my care and to teach the faith, clearly and compassionately, even on very difficult and sensitive issues.”

Demonstrations have been planned, the story is not going away, and Tobin—a high-profile conservative who is no supporter of Pope Francis—will be lionized by the Catholic right and criticized by those with more liberal views within the church, and there are a number. But while the secular world has reacted with understandable anger at all this, within his own Christian context and framework does the man have a theological and philosophical justification? Many Christians would say that he did, but I disagree. I’ve spent much of the last five years of my life studying this area, and I am convinced that there is nothing in Christianity that can support discrimination against, or rejection of, gay men and women.

RELATED: Inside the global persecution of Christians—and why it’s only getting worse

It often surprises people when they learn that the subject is hardly mentioned in the Bible, especially when we remember how much time people like Bishop Tobin devote to it. The Old Testament is often quoted, but without a thorough understanding and with a painful disregard for its authentic nature. These texts are not history, and certainly not some guide to contemporary living—witness the defence of slavery, ethnic cleansing, and the archaic treatment of women. The story of Sodom, for example, is actually about protecting one’s guests, and loving God, rather than condemning gays and lesbians. The homophobic element was injected centuries later by the early medieval church, for all sorts of political and sociological reasons.

When the Hebrew Scriptures do mention homosexuality, and it’s men and never women by the way, it also refers to the unacceptability of certain combinations of cloth, eating the wrong foods, or having sex with a woman when she is menstruating. Odd how the only segments of these lists that are still embraced are those disapproving of gay sex.

Jesus doesn’t mention homosexuality at all, and is in fact startlingly unconcerned with the sex lives of those whom he encounters. The central teaching of the Gospels is love and compassion, and if one group does provoke him to anger it’s the puritans and moralists. Omission does not necessarily signify approval, but there may be one incident where Jesus does pass comment. He is approached by a Roman centurion, who explains that his slave, a man he loves very much, is dying. Will Jesus heal him? The servant is cured, and Jesus is amazed at the soldier’s faith.

In first-century Palestine, the Jewish people were humiliated by Rome’s occupation, and in an attempt to mock their oppressors would joke that Roman soldiers had sex with each other and with their male slaves. The dark humour of the powerless. Combine this with the specific Greek words used in this story for “love,” which go far beyond “affection” or “friendship” and it may well have been that this scene was taken as a clear reference to a same-sex relationship.

READ MORE: What it’s like to be LGBTQ at a Canadian Christian university

The apostle Paul does speak briefly about homosexuality, but we ought to remember that the word itself didn’t exist for many centuries, and Paul was responding not to committed, loving relationships but to heterosexual men using boys for sex—significantly, the Greek word he uses is “exchange.” He is speaking of an abuse of power and of exploitation of the vulnerable, sometimes for pleasure and often as part of Roman and Greek religious rituals. Paul was a sublime thinker, but isn’t really part of the modern conversation around this issue.

Part of this narrative goes far beyond the Bible, of course. Horribly damaging church policies towards the LGBTQ community, and to women, Jews, and Indigenous people can often be traced to the need to preserve power and control and have had nothing at all to do with the frequently radical culture of, in particular, the New Testament. There’s a bitter continuum here, extending from abortion to sexual identity to clericalism and the equality of all believers.

But the Bible matters, and along with faith, reason, and experience, should be the foundation of the Christian conscience. I would never argue that it blasts support for LGBTQ people, but equally, when we read this collection of books with knowledge and without malice, I believe that it doesn’t condemn it either. In short, it doesn’t say very much at all. What it does say, and sing and shout and demand, is empathy, kindness, and justice. This should be the overwhelming concern of the Christian, from the most casual congregant to the most senior prelate. And that, Bishop Tobin, is something we should state with—well—enormous pride.