Denise Balkissoon: One billion animals have died in Australia’s fires, while those who are truly responsible continue to make a profit as the planet burns 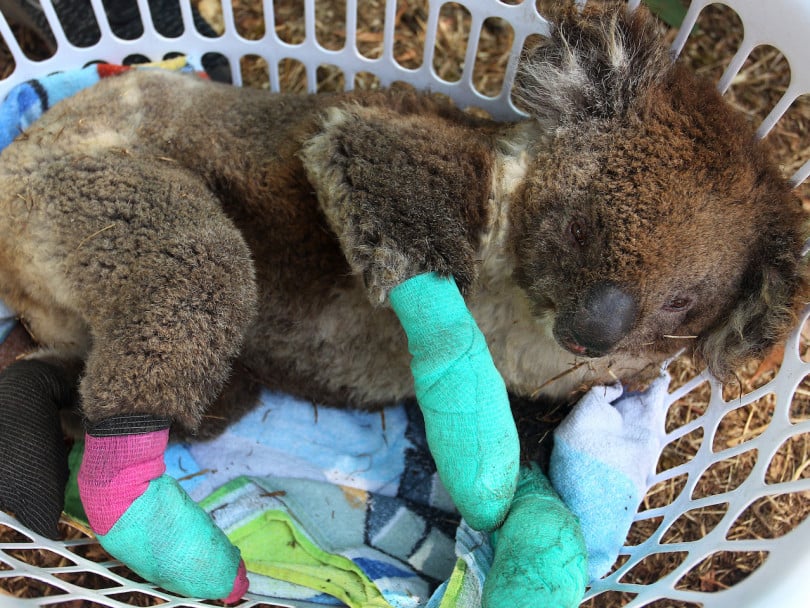 An injured koala rests in a washing basket at the Kangaroo Island Wildlife Park in the Parndana region on Jan. 8, on Kangaroo Island, Australia. (Photo by Lisa Maree Williams/Getty Images)

Warning: this post contains a graphic image from the Australian bushfires.

Of all of the horrific images coming out of Australia’s relentless bushfires, there’s one by news photographer Brad Fleet that haunts me the most. It’s of a charred, blackened piece of coal–a piece of coal that used to be a kangaroo. The poor thing was just a baby, as innocent as the children choking on the country’s beaches right now, and the rest of the estimated one billion animals that have died in the fires so far. None of them chose to contribute to climate change, which scientists agree is making Australia’s annual fire season worse. But even among adults whose daily decisions do fuel global warming, the responsibility for this terrifying mess isn’t equally shared.

READ: An Australian bushfire terrorizes every living thing in its path

Last October, an analysis by the Guardian found that a full third of modern greenhouse gas emissions could be attributed to just 20 companies, all of them in oil, gas and coal. It’s increasingly clear that many of the same companies knew about the threat of excess emissions decades ago, and allegedly worked to suppress and combat the science. Yet headlines keep calling out the “we” that’s supposedly indifferent or unmotivated about the emergency, or the “you” that needs to quit plastic straws in order to fix it.

Yes, each of us should disentangle ourselves from the sticky web of fossil fuels. The future of the world depends on decarbonization, and Canada has one of the highest levels of annual per capita emissions of any country in the world. Even so, a push towards blanket culpability and individual solutions allows those who are truly responsible to avoid recrimination, while continuing to make a profit as the planet burns.

There’s a narrative making the rounds in Australia right now, about how traditional Indigenous burning could reduce the damage done by future fires. It’s a point that’s been raised in Canada, too: that pre-colonial First Nations used controlled burning to clear dry, flammable brush from forest floors, a practice that was deterred by colonial ideas of conservation that have contributed to increasingly intense fire seasons.

But amid all this praise for their fire techniques, ongoing mistreatment of the world’s Indigenous people will likely make the climate emergency worse. Currently, the Australian government is trying to push the Wangan and Jagalingou people off of 1,385 hectares in Queensland. Incredibly, it’s to mine for coal, the fuel that the International Energy Agency says is the single largest source of the global temperature increase.

Over here, the RCMP seems poised to help Coastal GasLink force a natural gas pipeline through Wet’suwet’en territory in B.C., (even if it requires violence, according to reports from the Guardian). This, even though it will clear-cut endangered caribou habitat, and the provincial government agrees that construction of this project and half of the LNG Canada alone will release four million tonnes of carbon pollution a year.

These are just two examples of how the supposedly shared refusal to deal with climate change disproportionately affects those least responsible, including women, people of colour, and those who are poor. The ravages of amped-up natural disasters have so far been mostly in the global south, where per capita emissions are far lower than in the rich, much less affected north. And in those culpable countries, those who could actually implement the policies needed to slow climate change–because it’s not stopping–continue to try and play both sides.

Yes, the Trudeau government has managed to get the whole country paying carbon levies. It’s also pretending that reducing emissions and growing a resource-based economy can happen at the same time. Last October, the prime minister reiterated that the Trans Mountain pipeline will be completed “as soon as possible,” even though it also crosses Indigenous territory that many Secwepmc are unwilling to give up.

And while Australia prepares to slaughter thousands of camels competing with humans for water, Prime Minister Scott Morrison is doubling down on his commitment to coal. Which isn’t a surprise, given that he’s on the receiving end of multimillion-dollar lobbying by fossil fuel companies—never mind direct political donations.

Look at BP Australia, for example, which has pledged $635,000 to bushfire relief–while its parent company reportedly spends US$50 million annually fighting crucial climate action around the world. Remember, the company formerly known as British Petroleum is directly responsible for the death of thousands of marine mammals and sea turtles in the Gulf of Mexico, where biodiversity seems permanently altered by the 2010 Deepwater Horizon spill.

Yet last October, BP had the audacity to spread guilt about individual emissions, tweeting its offer to help analyze “your carbon footprint” and suggest ways to reduce it. Such posturing is a smokescreen, one currently choking Australian animals to death.

On New Year’s Eve, an ExxonMobil Australia message telling everyone to “stay safe and have fun” received a furious backlash. So did Morrison last week, from an Australian firefighter and an enraged woman, who both refused to shake his hand. Both of them have lost their homes in the fires and are now intimate with a dark truth: no matter what anybody says, we are not all in this together.