Corey Mintz: The Dream doughnuts look reasonably similar to their advertised versions, in the way that lesser Hemsworths look like Chris Hemsworth 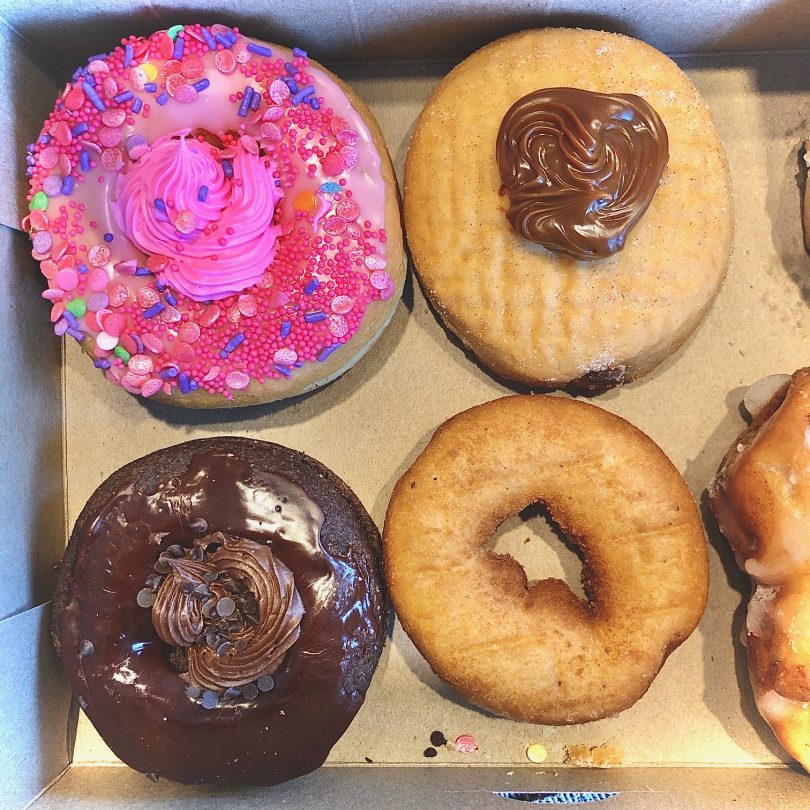 Spending three months with family means sometimes watching what they like on TV, which is how I come to view the Mixed Martial Arts (MMA) fights. As the two combatants rolled on the ground, elbows pummelling skulls, tearing flesh in what I believe is the very precise art of Brazilian Jiu Jitsu, I get a hankering for Brazilian food.

So I head to the closest Brazilian restaurant, Tim Hortons, hoping for some carne louca (slow-cooked beef poured into a hollowed-out bun) or bolinhos de chuva (raindrop-shaped cinnamon beignets).

But the former Canadian company, now owned by RBI (Restaurant Brands International, which also owns Burger King and Popeye’s), a subsidiary of Brazilian investment firm 3G Capital, does not serve these, or feijoada or arroz com pequi or any other Brazilian dishes.

Tim Hortons serves coffee and doughnuts. Recently, the billboard advertising for their new “Dream donuts,” which are doughnuts that cost $1.99 instead of the usual $0.99, has been inescapable.

Last summer, when they launched a prototype shop in Toronto’s financial district, I’d tasted some of the company’s innovations. They weren’t very good. But it was just a demo. Surely, after half a year to kick the tires and work out the bugs, their new product line would be road-ready.

@TimHortons I was so excited to try the new #dreamdonut but this, is just….sad. What a disappointment! pic.twitter.com/YpnEEE7IzI

That’s not a surprise. I am writing this from Winnipeg where Tim Hortons recently locked out workers who were striking over a $0.30 per hour raise. So it never seemed likely that franchise owners, paying as little as possible, were going to get staff to blowtorch sugar over crème brûlée doughnuts for their delicate caramelized finish.

On the side of Henderson Highway on the edge of town, I pull into a gas station with an adjacent Tim Hortons. The dream has been whittled down to three—strawberry confetti, dulce de leche and chocolate truffle.

There’s been a wave of social media criticism of these products, as Canadians have purchased doughnuts that are over-filled, under-filled, dripping in gloopy icing, missing their filling or garnish. Some of the failed attempts (you can find plenty under the #dreamdonuts hashtag on Instagram) at producing an aesthetically viable doughnut lend credibility to the conspiracy theory that I’m starting right now—that the Dream doughnut product launch is actually buzz-marketing for a new season of Netflix’s Nailed It!

My dulce de leche is missing the dusting of cinnamon sugar. The piping on all three is sloppy, reminding me less of a professionally cooked pastry and more of that first day of baking in cooking school, when most of us struggled to fit a piping bag with a star tip, fill it with whipped cream and squeeze out a basic swirl, never mind a rosette. But otherwise, the Dream doughnuts look reasonably similar to their advertised versions, in the way that lesser Hemsworths look like Chris Hemsworth.

The strawberry is a yeast doughnut painted with pink fondant, the icing built for shelf life and texture, not flavour. Who, other than Buddy “Cake Boss” Valastro, likes fondant? It is bedazzled with beaded, tubular and circular sprinkles in lavender, hot pink, yellow and green. A bright fuchsia frosting, piped into the centre, contributes a welcome texture, a departure from the standard Tim Hortons yeast doughnut (miraculously never fresh), but has all the summertime feel of a box of strawberry Pocky that’s been sitting in your backpack since the previous school year.

This box makes me think I am getting a burger.

The chocolate truffle appears to be a chocolate cake doughnut glazed with chocolate, sliced lengthwise like a bagel, with a schmear of chocolate cream inside, and ganache piped into the hole’s centre. There are supposed to be chocolate shavings somewhere.

The ratio of doughnut to filling is the equivalent of a deli sandwich with a single slice of pastrami between the bread. Considering the increased labour costs of slicing and filling each doughnut versus the result, they needn’t have bothered.

Finally, in a goldilocksian triumph of threedom, the third doughnut succeeds at least in presenting something (some flavour) previously unavailable at Tim Hortons. Though not specifically Brazilian, dulce de leche does at least originate from South America. Some say the caramelized sweet milk was born in Argentina, Uruguay, Chile or Peru. But we’re on the right continent. And it doesn’t matter (as it turns out that the fight I saw wasn’t actually Brazilian Jiu Jitsu). The dollop of sweet sauce, however, is a welcome accompaniment to any doughnut, even this one, which is of the dense, bready and stale Tim Hortons tradition. 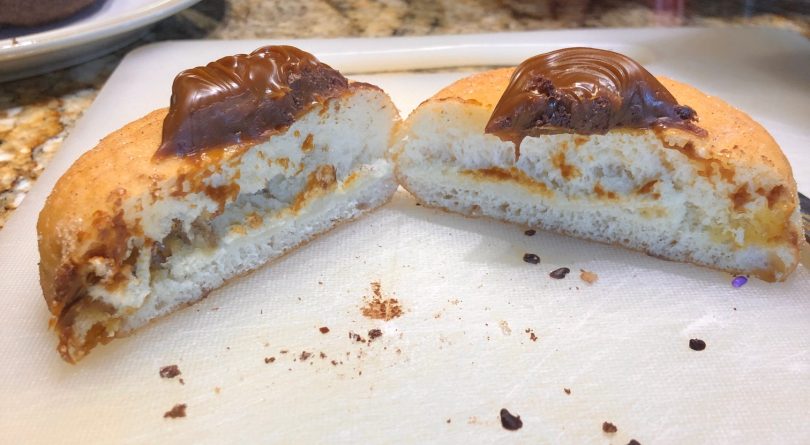 Like the many consumers who complained that theirs was bereft of a promised filling, there was nothing inside mine.

But don’t worry. I added a classic plain doughnut to the box. And that one is just as good as it has always been. Which is to say that, as the best item on the entirety of the Tim Hortons menu, it is adequate.