To our new Parliamentarians: Don't be a**holes

Scott Gilmore: On your first day in the House, you're going to see your colleagues heckle. It's a stain on the beating heart of our country. 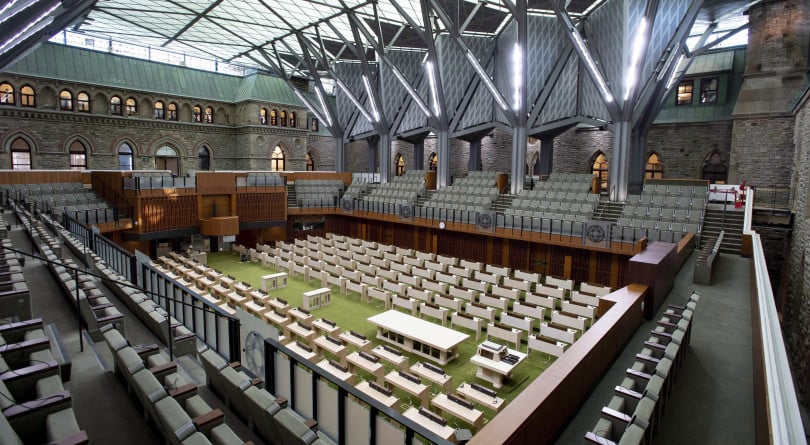 The new House of Commons Chamber on Parliament Hill in Ottawa on June 15, 2018 (THE CANADIAN PRESS/Justin Tang)

Let me begin by assuring you it gets warmer. I recommend finding a place to live that is within walking distance of Parliament—the public transport is a disaster and we inexplicably only have one badly clogged artery for commuters.

And welcome to the House of Commons. It’s beautiful isn’t it? Even the new, temporary, quarters give you chills when you walk in.

When you sit in your new desk, look up. The viewing galleries that look down on you are often surprisingly full with Canadians who came to Ottawa for business, to see family, or just as tourists, then decided to watch the people they elected work.

It’s a rare moment of true awe, when someone enters the House for the first time. There’s a whole process to get in the building. There are lines and ushers and rules. The guards who open the gallery doors are quiet and their seriousness effecting—you immediately know this is a special and important place.

But you don’t need their demeanor to tell you that. The soaring space above, the grand Speaker’s chair below, and the officious clerks and pages respectfully scurrying about make it clear that this is a serious place—this is the very beating heart of our great country—this is where it all happens.

READ MORE: Why are MPs browsing their phones during question period?

And they see you, their fellow Canadian they sent here to represent them. Once you notice them above, watching you in your seat, I hope you always feel those eyes on you. Because they are.

Which brings me to the point I want you to understand. It’s a point your party leader should be making, but sadly never does: In your first day in Parliament, in your first Question Period, you are going to see your colleagues to the left, to the right, and in front and across the aisle, act like assholes. Don’t do that.

Parliamentary heckling has a long and sordid history in Ottawa. It waxes and wanes. Some years it seems better than others. Other years it seems especially bitter and partisan. But it is sadly always there, always a stain on the House.

It comes in many forms. There’s the tellingly inarticulate “Oh! Oh! Oh!”, usually said loud enough to drown out whoever is trying to speak. There’s the mocking laughter, the shouted insults. Occasionally even a threat or two. Women parliamentarians are on the receiving end far more often than the men, which is also telling.

Not coincidentally, the loudest hecklers are often the least known. Presumably, failing to get the attention of the party leader or the press, they are hoping to be seen by loudly harassing their colleagues.

What is strange about this is they (and you) once worked elsewhere, in places like law firms, board rooms, classrooms or clinics. And, regardless of the profession, they worked in places where yelling and bullying like this would get you fired—for reason. Because this is not how adults behave. Hell, it’s not even how middle school children behave. In fact, the only place in the entire country where you can find jack-assery like this, is right where you are sitting now.

And this is, frankly, disgraceful. The hecklers in Parliament clearly do not understand that Canadians expect them to take this job seriously. They act like it’s all a lark. They think it’s an “us vs them” game. And, as a result, every Question Period they disgrace the House and themselves. They should not be there.

My God, it would be refreshing to have a party leader who instead of smirking (which they often do) called the hecklers in to their office and said: “Cut that s–t out. You’re making us look like clowns. The Canadians who sent you here deserve better.” Evidently this doesn’t happen, which is why I’m sending you this note.*

And I’m not the only one who thinks heckling is a disgrace. Ask any of the spectators above what they think. I wager that almost every single one went from awe to disgust within minutes of sitting down. Watching you shouting and insulting is jarring, and fills them with shame—for you, for this house, for the country. They expect better. They deserve better.

This may explain why 40 per cent of the MPs called out for heckling by the Speaker in the last Parliament are not sitting there with you now. In Parliament as in the dog park, the yappiest ones are the smallest dogs.

So, don’t be that dog. Listen to what is being said and you will undoubtedly rise at the end of the session wiser than when it began. The honour of your life will ever be the moment you sat in your seat. Don’t forget that.

*This is true—I printed and sent this note to all 98 of our new Parliamentarians.