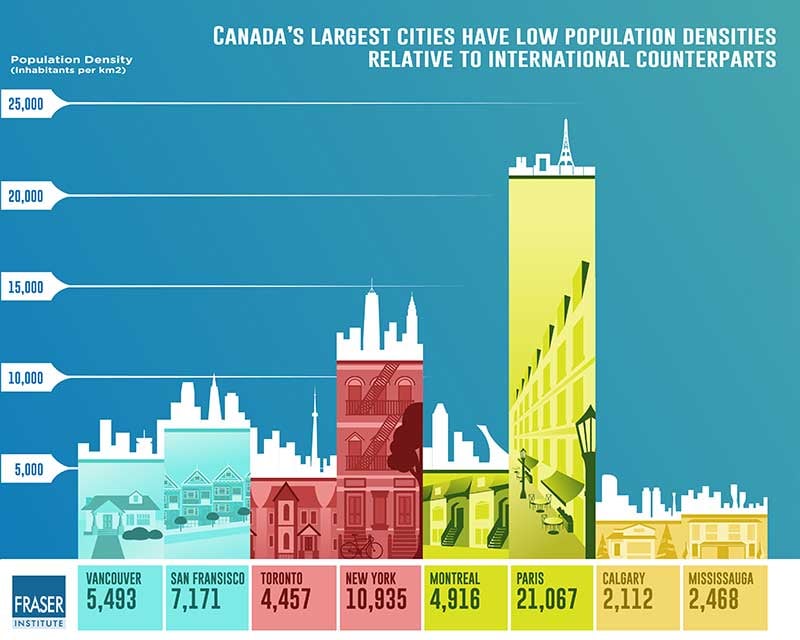 Headlines about housing affordability in Canada mainly concern two cities—Toronto and Vancouver. In both cities and their surrounding areas, rental vacancies hover at or below one per cent, and home prices remain historically high. In short, Canada’s most desirable markets face tremendous pressure to grow.

Cities facing high housing demand can respond by growing in two ways—outward, through the construction of new communities at the urban fringe, or upward, by accommodating more residents in existing urban areas. When the outward option butts up against mountains, oceans and rivers, or protected lands, cities looking to accommodate newcomers must grow upward, resulting in what city planners call “higher density.”

Which raises an important question—if growing upward is the most realistic option for Toronto and Vancouver (or any other Canadian city starved for housing supply), how do population densities in these cities compare to other wealthy growing cities around the world?

A new Fraser Institute study tackles this question, by comparing five of Canada’s largest cities with 25 peers from other developed countries. It turns out that, relatively speaking, Canadian cities aren’t all that dense.

Let’s start with Vancouver. At 5,493 inhabitants per square kilometre, it’s easily Canada’s densest large city. However, San Francisco—another West Coast city covering a similar land area—is 30 per cent denser. Beyond North America, the popular port city of Barcelona is geographically the same size as Vancouver and San Francisco but accommodates a staggering 15,873 inhabitants per square kilometre. While many Canadians may or may not prefer this level of urban density, the Barcelona example illustrates just how much room there is to grow. Indeed, despite the well-known images of sleek glass residential towers, Vancouver’s relatively dense downtown core is surrounded by a sea of single-detached homes.

Toronto—Canada’s most populous city—also has a lot of room to grow. As a major centre of finance, media and industry, its peers include New York, London and Chicago. Both New York and London are more than twice as dense as Toronto. And Chicago, which has shrunk in population since the mid-20th century, remains 3.1 per cent more dense than Toronto.

Knowing that Canadian cities have far lower population densities than peer cities abroad, a reasonable follow-up question is: How would more density impact living standards, either positively or negatively? Of course, what different people value in a city is subjective, but even so, it’s unclear that more density has any meaningful influence on city living.

After comparing city densities with consulting firm Mercer’s annual Quality of Living Rankings, no clear-cut conclusions appear. For example, Amsterdam and Philadelphia both have between 4,500 and 5,000 inhabitants per square kilometre, but are 44 ranks apart on Mercer’s ranking. Similarly, Montreal and Singapore rank 23rd and 25th on the ranking, even though Singapore is more than twice as dense.

So, not only are Canada’s cities not all that dense, but more density need not come at the expense of living standards.

With high home prices and almost non-existent rental vacancies in Toronto and Vancouver, these findings are important for many Canadians and their families. A growing housing supply goes a long way in addressing housing shortages, and facilitating more dense housing development can clearly boost
housing supply.

The good news is, there’s lots of room for Toronto and Vancouver to grow up.

Josef Filipowicz is a senior policy analyst, and Kenneth P. Green is a senior director, at the Fraser Institute.