Opinion: It's human nature to want to amplify speculation in a crisis. But there are some journalists who should've known better in how they reported on the Toronto van attack 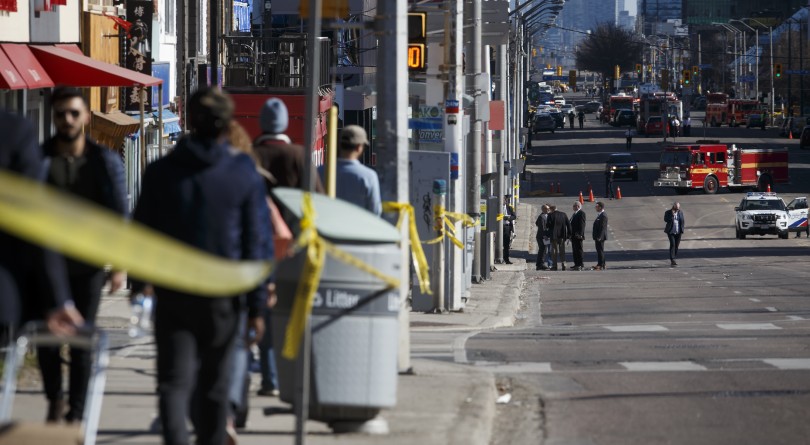 Police work the scene on Yonge St. at near Finch Ave., after a van plowed into pedestrians on April 23, 2018 in Toronto, Canada. A suspect identified as Alek Minassian, 25, is in custody after a driver in a white rental van collided with multiple pedestrians killing nine and injuring at least 16. (Cole Burston/Getty Images)

For hours, I didn’t know whether a member of my family was alive or dead.

On Monday afternoon, a man driving a rental van jumped the curb near the North York intersection of Yonge and Finch, and proceeded to ram the vehicle into pedestrians. Pictures and video from passersby and residents of nearby condo towers flooded Twitter soon afterwards, capturing the mass of emergency first responders tending to victims, as well as the man’s dramatic arrest.

People in my family live on the same block where the incident happened. And because I couldn’t reach one of them, despite my incessant calls and text messages, all I had available to me was scanning the Toronto Police Twitter account and searching the #yongeandfinch hashtag. I saw grief and shock—but also saw the space become a dumping ground for toxic, racist and xenophobic opinions spurred on by people who call themselves journalists, eager to feed a narrative before the suspect’s name had even been released.

In the absence of reliable information, it’s human nature to quickly and desperately amplify rumours. In a breaking-news situation, speculation is often more accessible than hard fact. But in a media environment that too often prioritizes getting the information first, rather than getting the information correct, speculation regarding the perpetrator and his motives from journalists—who should know better—made that task all the harder. The result was hours of misinformation, which inspired a spate of Islamophobic racism, and harassment of an innocent man. It was a reminder that speculation on social media has very real impact on very real human lives.

Less than 30 minutes after the incident, Toronto Sun columnist Lorrie Goldstein tweeted that a van had struck “8 to 10 pedestrians,” and that the cause was “unclear.” He then added: “In today’s world, I think we all know what we’re thinking it could be. Let’s hope it isn’t.” About an hour after the incident, news broadcaster CP24 interviewed a witness to the incident, who described the attacker as “a Middle Eastern-ish man.” Immediately after the words were spoken, CBC reporter Natasha Fatah tweeted: “Witness to truck ramming into pedestrians tells local Toronto TV station that the driver looked wide-eyed, angry, and Middle Eastern.”

As the tweet went viral, collecting hundreds of reshares within the hour, more Sun columnists began to weigh in on the attack before the facts could be verified. Candice Malcolm tweeted “Here we go…”; Joe Warmington described the incident as a “senseless terror attack”; and Fatah’s father, Sun columnist and former Newstalk 1010 radio host Tarek Fatah, tweeted a picture of the damaged van with this caption: “The Toronto rented van that was driven by a ‘wide-eyed,’ ‘angry’ man identified by a witness as a ‘middle-eastern’ man who intentionally ran over pedestrians on the sidewalk plowing through people ‘with a stroller flying through the air.’ ”

The emerging narrative set off a chain reaction on Twitter. Former Sun News and Rebel Media reporter Faith Goldy filmed herself via Twitter livestream near the scene of the accident, repeating the witness claim that the attacker was Middle Eastern, and even tweeting pictures of the tarp-covered bodies of the victims—even as some were still looking for information about their loved ones.

Soon afterwards, Breitbart News ran a headline declaring “Up to 9 dead as white van hits pedestrians in Toronto, driver described as ‘angry and Middle Eastern.’ ” Alt-right figures Gavin McInnes and Paul Joseph Watson also weighed in with snarky and Islamophobic comments. The hashtags #yongeandfinch and #toronto, which had begun to filter in statements of genuine condolence for the victims, soon became clogged with inflammatory tweets from the far right, slamming the “price of diversity” and “Trudeau’s terrorist-appeasing immigration policies.”

Even after credible details began to emerge, misinformation continued to cloud news coverage. CBS News incorrectly reported that the name of the perpetrator was “Alex Minassian,” which pointed news outlets towards a man who had nothing to do with the attack. A few hours later, Toronto Police Chief Mark Saunders would even deliver a press statement specifying the name of the alleged attacker was Alex and not Alek Minassian, the actual name of the suspect, going so far as to spell it out for the record. (The Toronto Police Twitter account later corrected their error). But both the CBS report and the police statement—plus his similar name, similar ages, similar close-cropped hair and the fact that both were from Richmond Hill, Ont.— led to digital news outlets posting headlines with his likeness, linking to his Facebook profile, and bombarding his family with interview requests.

When Alex Minassian’s name was picked up by the alt-right sphere of Twitter, they immediately began mining his friends and Facebook groups, labeling him an “anarcho-communist” and NDP supporter—even though he had no relation to the incident or the person charged.

Minassian tried to stop the misinformation, posting, “Not me. No connection. NBC, ABC, CBC, stop harassing my friends and family.” But long after the clarifications were issued, the wrong Minassian’s name is still being reported by news outlets, including St. Johns AM radio station 590 VOCM, and journalists, including Mikey Kay of ABC and Vipal Monga of the Wall Street Journal. I reached out to Alex in the wake of the misreporting; he seemed overwhelmed. I let him know that the alt-right was engaging in a smear campaign against him. “Twitter doesn’t really try to protect the victims of the alt-right, do they?” he replied.

In the midst of a horrific and random attack, there were shining moments. The poise of Constable Ken Lam, who was able to subdue Alek Minassian without firing a shot or even resorting to violence. The level-headedness of Canada’s political class, who unanimously delivered the message that we will not respond to this tragedy with fear and intolerance. And the thoughtfulness of Toronto residents, who put together a memorial in nearby Olive Square that continues to swell with flowers and messages for the victims of the attack.

But speculation, even in a fast-moving, breaking-news situation, is irresponsible in an atmosphere that is too eager to score political points on the bodies and lives of the innocent. And if these reporters aren’t going to be bothered to offer an apology, they could at least take a lesson from the rest of the city on how to respond professionally during a crisis.