Trudeau should try walking the walk on climate change

Andrew MacDougall: Instead of jetting off to the G20 to be a fly on the wall in the Trump-Xi show, the PM could have made a real statement at home 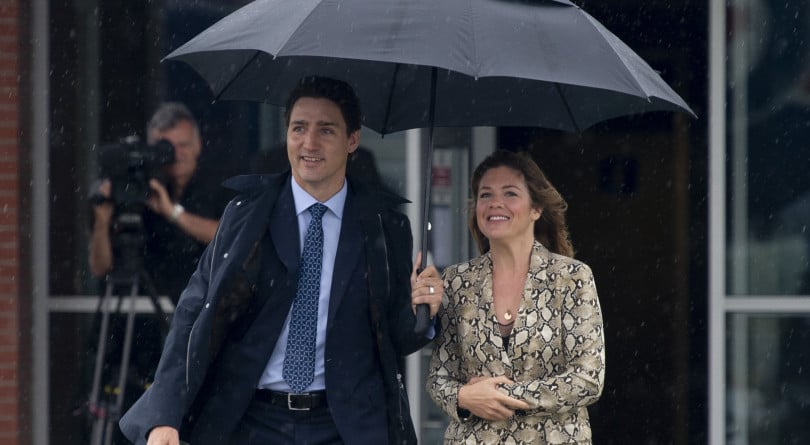 Trudeau and his wife Sophie Gregoire Trudeau board a government plane in Ottawa as they depart for the G20 in Japan on June 26, 2019 (THE CANADIAN PRESS/Adrian Wyld)

Being a climate champion is bloody hard work.

You have the dullards at home and abroad resisting the need for action. There are the petty critics leveling accusations of hypocrisy at those bold enough to take action on things like single-use plastics. And then there’s the tinfoil brigade who thinks carbon dioxide is simply wonderful stuff and the Earth can’t have enough of it. No, it’s not easy being green.

Say a prayer, then, for Justin “Carbon Tax” Trudeau who just winged his way to Japan on his 35-year old plane (GHG emissions = ?) for the G-20 Summit, where the debate on climate change won’t last as long as a fart in a hurricane, such is the geopolitical distemper of our times.

How weak will the climate change program be in the land of the Kyoto Accord? Well, the Americans have apparently already pressured the Japanese into downgrading the G-20’s previously agreed climate change language on the Paris Accord in the Summit communiqué.

Sorry climate emergency, the G-20 will instead be about Donald Trump and Xi Jingping, as the world waits to see whether a showdown can be averted between the United States and China. Will a trade truce be struck? Will the tariff walls come down? Will Huawei be allowed to resume its rapid creep across the West’s critical telecommunications infrastructure? Will Huawei’s Meng Wangzhou be bartered as part of a deal?

One thing we do know is Trump is coming into the meeting on blazing form. He’s already dumped on host (and frequent golfing buddy) Shinzo Abe, accusing him of being willing to sit back and watch a World War III between the U.S. and China on a Sony TV.

He’s also been tetchy about people asking about his bilateral meeting with his Russian handler. And he’s gone and accused former Special Counsel Robert S. Mueller of committing crimes ahead of Muller’s appearance before Congress.

No, even Mother Nature couldn’t push climate up the agenda under these circumstances. But given climate change is so central to the Trudeau brand and its prospects for re-election, what could Trudeau do to put it front and centre at home and abroad?

For one, he could start by staying at home at bit more often.

Air travel is a huge contributor to carbon emissions and much of international summitry is useless. Why go be a carbon-emitting fly on the wall in the Trump-Xi show, i.e. where Canada’s views aren’t solicited or listened to when given? Sure, it would be wonderful if Trudeau could buttonhole Xi on the margins of the G-20 to demand the release of our two abducted Canadians, but given the Chinese won’t even take our phone calls right now the chances of such a meeting are slim.

Instead of being ignored, why not announce that until further notice Canada will be dialling into future Summit sessions? Sure, it will drive the Global Affairs bureaucracy nuts, but it would send a message and be talked about. The Greenies would love it. And, sure, if another global economic depression arrives you go and meet face-to-face, but has a G-20 meeting truly mattered since about 2011 or so?

The same flight discipline should be applied at home, too. Instead of running a contest to ride the Liberal campaign plane around the country, as the Liberals are now doing, or taking the Challenger to Florida on holiday twice in one week, Trudeau should announce that, going forward, he will be restricting his travel and doing his announcements via video conference. Imagine how a campaign full of digital rallies, or a good old-fashioned (and less carbon intensive) train ride across Canada, would look and feel?

Mixing the Luddite with the high tech would start a different green conversation to the merits of carbon taxation and help counter any allegations of hypocrisy. It would finally put Trudeau’s money where his mouth has been for the past four years.

Because one of Trudeau’s main weaknesses is absolutely that he is a “do-as-I-say-not-as-I-do” politician. He railed against rich people getting child benefits throughout the 2015 campaign and then put two nannies on the 24 Sussex payroll the day after he won. He said the woman must always be believed on sexual harassment and kicked members out of his caucus for abuse, but then threw away the standard when a credible allegation was made against him. And he banned single-use plastics only to use them a few days later at a constituency meeting.

Yes, the flak for the single-use gaffe was overdone, but it does illustrate the difficulty in changing embedded behaviour. That is the climate change conundrum in a nutshell: everybody wants to do something as long as they don’t have to do much of anything.

Seeing a leader like Trudeau walking the walk—truly walking the walk—by restricting his enormous footprint and doing things differently would be a welcome bit of principle on climate change. Because as it stands, the Liberals’ position is that their plan would do a better job at not meeting Canada’s targets than the Tory plan.

Being a climate champion is hard work because it involves upending an entire way of life. If the Prime Minister of Canada is willing to do it, it makes it harder for others to say they won’t do their bit.