Stephen Maher: Trudeau and Freeland handled the worst America could throw at us (Donald Trump). The next challenge: don't get cocky. 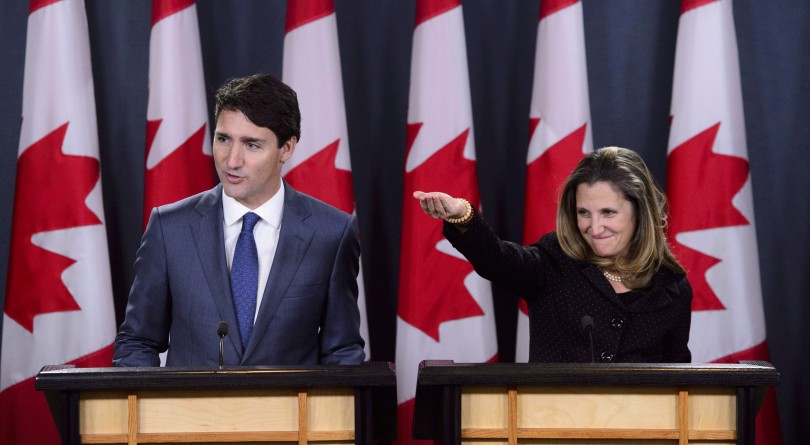 We now return to your regularly scheduled programming.

After months of trash talk, threats, dull stories about closed-door meetings and a pervasive atmosphere of economic dread, on Sunday night, Canada, Mexico and the United States agreed on a new trade deal very similar to NAFTA.

With any luck, this will close an irritating chapter in our relations with the United States, and we can pay less attention to the awful blowhard that our neighbours have selected as their leader.

Donald Trump treated Justin Trudeau like a competitor in a tabloid feud over a New York City real estate deal, unnecessarily creating drama around a trade relationship that should be too important for cheap shots.

It has been confusing for us, because Canada has never produced a no-class big mouth like Trump. In the 1990s, the man used to pretend to be his own publicist and call journalists to brag about his own sexual exploits. Our worst clowns are just not in that league.

At the news conference on the deal on Monday, true to form, Trump insulted a female journalist.

He’s a noxious bully, the prototypical ugly American, not the kind of person you would ever choose to do business with, but our economy depends on trade with the United States so we have no choice.

Trudeau deserves some sympathy for having had to put up with him, and Chrystia Freeland deserves more.

She had to grit her teeth, keep her mouth shut and keep going to the meetings. There were just too many jobs, too much money on the line to do anything else.

She must have been tempted to respond to Trump’s barbs with some shots of her own, but she remained blandly Canadian throughout.

In June, after an unpleasant summit with his allies in Charlevoix, Que., Trump had a temper tantrum aboard Air Force One, and tweeted that Trudeau was “very dishonest and weak.” He then sent his trade advisor, the knuckle-headed Peter Navarro, onto Fox to say that Trudeau deserved “a special place in hell” for stabbing Trump in the back.

Freeland responded to this petulant display with a very Canadian putdown: “Canada does not conduct its diplomacy through ad hominem attacks. We don’t think that a useful or productive way to do business. And perhaps we refrain particularly from ad hominem attacks when it comes to our relationship with our allies.”

You hear that, Americans? We don’t conduct our diplomacy through ad hominem attacks! We’re supposed to be your allies. You guys might be acting like big jerks, but we have too much class to point that out.

Freeland put up with being smeared by Trump, bit her tongue, and came up with a deal that, at first blush, seems pretty good, certainly much better than the sudden, deep Ontario recession that would have followed if the talks had failed.

Freeland, an unusually talented politician, suddenly looks like a natural successor to Trudeau, perhaps after serving as the first female finance minister, if Trudeau can find some international challenge that desperately needs a man like Bill Morneau.

It starts to seem sensible to ponder this kind of long-term question now that Trudeau and Freeland have delivered a deal, because the horizon looks strikingly free of trouble for the Liberals.

On the left, Trudeau is facing the weakest NDP leader in memory. On the right, he faces Andrew Scheer, who looked like a threat in the spring but now looks terminally weakened by Maxime Bernier’s upstart party.

Trudeau is again in a position to relax and start making long-term plans, perhaps even pencil in some photo ops overseas!

Sure, there are still nasty files on his desk. He faces corrosive public fights with premiers over his carbon tax, and will have to explain why he has purchased a $4.5-billion pipeline that the courts won’t let him build.

But those are manageable, normal problems. NAFTA was an existential threat, to his government and our economy, and that threat is now gone.

The biggest threat to to the government now seems to be the one that they faced before Trump’s election—traditional Liberal arrogance—the smug complacency of the people who think of themselves as the Natural Governing Party, and expect the rest of us to be suitable grateful.

At his post-deal news conference, Trudeau started to sound a bit like Brian Mulroney at his mellifluous worst, boasting about his deal in a baritone purr. He needs to guard against sounding too pleased with himself, and take care not to believe his own nonsense about this amazing feat of statesmanship.

The truth is that a deal was always in the interests of the Americans, and any Canadian government would likely have negotiated something similar after spending some unpleasant time in Trumpland.

The Liberals, through no fault of their own, had to spend a big chunk of their mandate dealing with a Trump-shaped dumpster fire. They did their jobs, put out the fire and got a deal.

They need to turn now to whatever it was they were elected to do—something about the middle class, if memory serves—and get back to that.