Donald Trump failed a simple test on his Russian ties

Stephen Maher: Trump fired the Secretary of State right after he denounced Russia for a nerve gas attack on British soil. It speaks volumes. 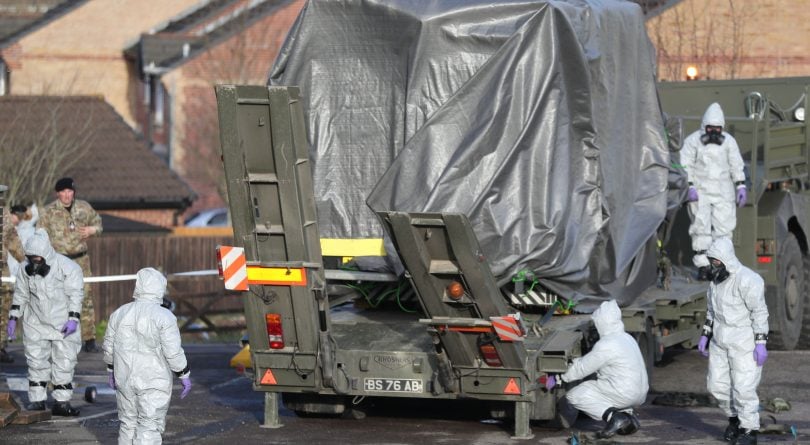 Military personnel load an ambulance on to a truck in Harnham, near Salisbury, as police probe the suspected nerve agent attack on Russian double agent Sergei Skripal. (Photo by Andrew Matthews/PA Images via Getty Images)

Donald Trump’s sudden Twitter firing of Rex Tillerson on Tuesday is the moment that it became impossible to maintain the fiction that Trump is not in some way in league with Vladimir Putin.

We can’t know whether Putin has, as reported in the Steele dossier, disgusting kompromat that could bring Trump low, or whether Trump has compelling business or political reasons to make him dance to the tune played by the vicious assassin in charge of Russia, but if there was any real doubt about the relationship, Tillerson’s firing removes it.

Tillerson, himself a recipient of the Russia’s Order of Friendship from Putin, was fired the day after he denounced Russia for the attempted assassination of a former double agent in Britain with nerve gas, promised solidarity with Britain and vowed there would be consequences.

It seemed clear that Trump would have to echo Tillerson’s comments or be radically out of step with the western consensus on standing up to Russian aggression that NATO members have shared since the beginning of the Cold War. It was a simple test for Trump. He reacted by firing Tillerson.

Trump, Tillerson, Theresa May, Justin Trudeau and Angela Merkel would all have access to the same intelligence reports, which must show that Russia is behind the attack, and all but Trump came to the same conclusion.

After everyone else had concluded the Russians were behind the attack, Trump was still talking as if it might be someone else. “We’re speaking with Theresa May today and, as soon as we get the facts straight, if we agree with them, we will condemn Russia or whoever it may be.”

READ MORE: Russia is a mess but it’s still playing the West

On Thursday, speaking to reporters in the Oval Office he managed this much: “It certainly looks like the Russians were behind it.”

But you don’t need to see the secret intelligence reports circulated among world leaders to get the message.

Sergei V. Skripal and his daughter, Yulia, were found comatose on a park bench. Tests showed they had been exposed to Novichok, an extravagantly dangerous nerve agent invented by Russia, which is the only country known to have produced it. Dozens of Britons were hospitalized after coming in contact with the scene, and a police officer remains in serious condition.

It looks like the Russians used Novichok because they want the British to know they did this, and they want to sent a nasty message to anyone who might defy Putin: you will pay.

May demanded that Russia explain how its nerve agent was used in an attack on British soil. The Russian embassy in London responded with jokes, demands for a joint investigation and threats. The KGB angrily denied involvement. Meanwhile, Russian TV warned that double agents shouldn’t expect to live long, but also offered unlikely alternative explanations about what made the Skripals ill. Jealous Westerners were conspiring to ruin Russia’s World Cup.

Russia’s army of social media warriors, veterans now after their campaigns for Brexit and Trump, started to ridicule those blaming Russia.

This online army of Russian trolls and bots is engaged in a permanent campaign to sow division in the United States. After 17 students were shot to death in Parkland, for example, Russian-linked accounts spread messages designed to intensify the divide between supporters and opponents of gun control.

This strategy—using information warfare to weaken a foreign society—were first outlined by Russian general Valery Gerasimov in 2013, after he observed the impact of social media campaigns in the Eastern European “colour revolutions” and Arab Spring uprisings and urged Russia to engage in similar campaigns: “The role of nonmilitary means of achieving political and strategic goals has grown, and, in many cases, they have exceeded the power of force of weapons in their effectiveness.”

Since then, in reaction to what they saw as NATO expansion into their sphere of influence, the Russians have pushed back hard, systematically trying to weaken the institutions that could hold constrain them, or prevent them from annexing parts of neighbouring countries.

It has been a remarkably successful campaign of information warfare and now the EU, NATO and the United States have all been dramatically weakened. Considering that Russia’s economy is smaller than Canada’s or India’s, their new status as 21st century troublemakers is impressive.

By acting ruthlessly and aggressively, using every nasty old trick in the KGB playbook, and cutting-edge hacking and social media techniques, Putin has managed to undermine the Western consensus on security, trade and the rules-based international order more thoroughly than at any time since the Second World War.

The NATO alliance has always depended on the firmness of American resolve, which is now missing. Trump could easily demonstrate that he will stand with his NATO allies like every post-war president before him, but instead he has trash-talked the institution and remained silent when he needed to speak. With the Yanks out of the picture, Britain is isolated and constrained in its ability to respond to Russian aggression.

To make matters worse, the leader of the opposition, Jeremy Corbyn, is behaving like a useful idiot, parroting Russia’s skepticism and calling for hard proof. Like the House Republicans who ignored the evidence to declare that Russia didn’t help Trump win the White House, Corbyn is prepared to put his partisan interests ahead of his country.

In Canada, likely because of the political clout of our Ukrainian diaspora, there has been no opening for the Russians. But our intelligence and security agencies, our military and our political organizations had best be girding themselves for KGB mischief.

This is a dangerous new world and we can’t count on the Americans to protect us anymore.