Trump gets sick, America gets sicker 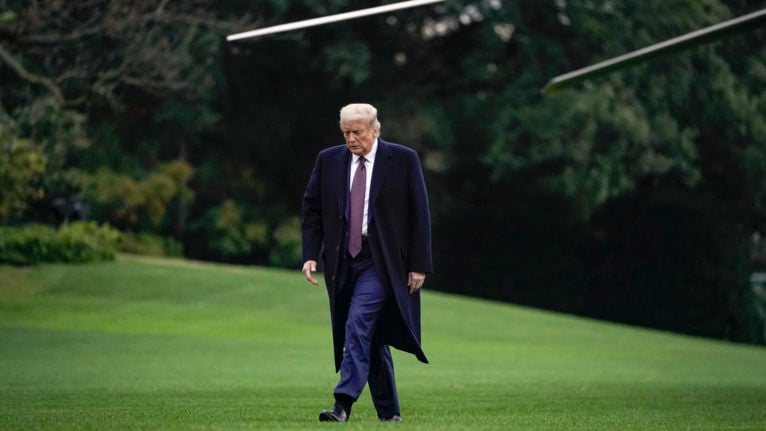 Trump exits Marine One on the South Lawn of the White House on Oct. 1, 2020, the day before announcing he tested positive for COVID-19 (Drew Angerer/Getty Images)

One of the first unexpected indicators that President Donald Trump had tested positive for the coronavirus was spotted flying at 24,000 feet, about 30 nautical miles off the coast of Delaware.

The United States Navy maintains a fleet of Boeing E-6Bs that are used as backup command centers controlling America’s nuclear arsenal. If an enemy attack destroys the underground bunkers that give the order to fire back, then the naval officers flying high above the Atlantic can push the button for them.

In the hours after it was revealed that Trump aide Hope Hicks was sick with COVID-19 and before the White House confirmed the president had it, too, amateur plane-spotters noticed that one of these E-6Bs was now in the air on the east coast, soon followed by another on the west coast. A military spokesperson has claimed it was a pre-planned flight, but to many others the message being sent to nuclear rivals was clear: The commander-in-chief is sick, but America’s armed forces remain alert and strong.

Like the ripples from a pebble dropped in a pond, when anyone gets sick or is in peril, there are implications that spread outward affecting family, friends, and co-workers. When the president of the United States is sick, those ripples are tidal waves and those tidal waves go around the world and back again.

To begin with, an already chaotic and bitter presidential election will suddenly swerve into utterly unknown territory. Presuming Trump quarantines as he has promised, his campaign will no longer be able to hold rallies, forcing it to fall back on advertising.

Trump is lagging badly behind Joe Biden in fundraising, however, and with the disruption following the firing and arrest of yet another campaign manager (the third to end up in cuffs) shifting gears like that will dramatically reduce the likelihood that Trump can make up the 10 point gap that currently exists between him and Biden.

Assuming Trump remains well enough to do so, he will almost certainly spend a great deal of his time doing media hits. When Brazilian President Jair Bolsonaro became sick with COVID-19, he frequently called into news shows to insist he was doing fine because he was an exceptionally healthy man, the risk had been badly exaggerated by the liberal media, and (regardless of what the “so-called” experts said) hydroxychloroquine was curing him. We can expect an identical script from Trump.

Which means that, ironically, if Trump gets sick but nonetheless pulls through, Republican supporters will become even less inclined to take the coronavirus seriously. The pandemic has already hit the United States harder than any other country in the world, due entirely to the fact Red America refuses to see it as a threat. That self-destructive blindness will only get worse.

And there is a significant possibility the president will not recover. According to the latest data from the American Center for Disease Control, patients of Trump’s age are five times more likely to be hospitalized, and 90 times more likely to die. How likely? Right now one in 10 male patients between the ages of 65 to 74 (Trump is 74) are dying from the virus. In the 75 to 84 age bracket, the mortality rate is one in five. Pre-existing conditions such as obesity make these odds dramatically worse.

The wave of implications may already be crashing over most of America’s senior leadership. Just three nights ago Trump spent two hours shouting at Biden while neither wore a mask. Senior generals, cabinet members, Senate and Congressional leadership, the vice president–all of these people will have been exposed and are likely being tested this morning. By this time next week the United States of America may be run by a skeleton crew as it navigates the worst economic crisis in 90 years, the worst pandemic in a century, and the most disruptive election in its history.

The commander-in-chief is sick. The Armed Forces may be alert and strong. But the rest of the country is a mess, and the next few weeks are only going to get worse.