Trump gives a press conference, and the world laughs (with him?)

Scott Gilmore: A year ago, this spectacle would have sparked several international crises. Today, the world is mostly laughing at the U.S. president. 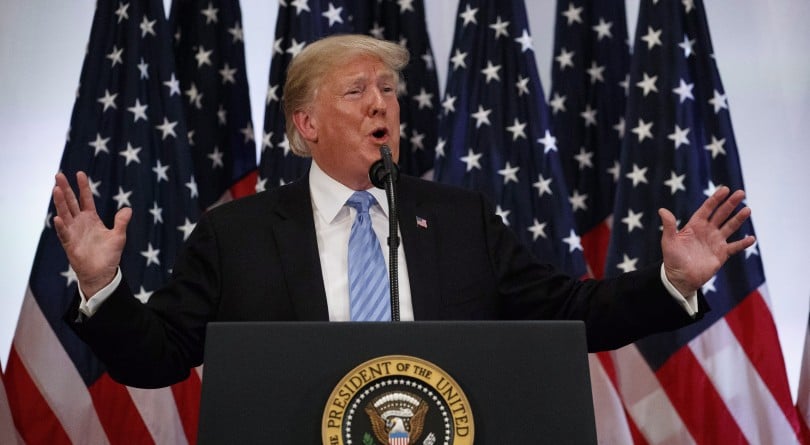 Watching the world’s diplomats laugh at Donald Trump yesterday, as he spoke at the United Nations General Assembly, reminded me of a quote from George R. R. Martin’s in his book A Clash of Kings: “Power resides where men believe it resides. No more and no less.”

Of course, in the fantasy world of the Game of Thrones, this notion is more easily believed. None of the characters are the commander in chief of the world’s largest military, nor do they have the ability to destroy the planet with nuclear missiles. Nonetheless, in our world, in New York, at the United Nations, it is easy to see how quickly power and respect can slip away.

A year ago, Trump stood at the same podium, and spoke to the same crowd, and they watched with rapt attention. A year ago, the world was still taking the measure of the man. His bombast and his apparent willingness to say and do the previously unthinkable had everyone on edge. He had the power to change everything, and so people listened.

But since then, Trump has given the world many reasons to ease their concerns. He is still mercurial. He is still bombastic. And, of course, he still has a hand on the button. But, he is more bark than bite. By all accounts, he is not even able to fire people face to face. He can’t bully his own party into building his wall. When he tries to kill an international agreement (with South Korea for example), his own staff thwart him. And when they don’t, as in the case of the Iran Deal, other nations simply carry on without the United States.

As a result, those gathered in the General Assembly now believe Trump is far less powerful than they once feared. He is now an object of amusement, even ridicule. No (western) leader, will openly mock him. But they don’t hesitate to roll their eyes and chuckle.

For someone as self-serious and seemingly insecure as Trump, this must be horrifying. When the crowd laughed at his assertion that his administration had achieved more than almost any other in American history, he seemed surprised and confused. If he did not then realize they were laughing at him, he surely understood as soon as he finished his speech. Almost every news service in the world describe the moment as a humiliation for the president, thus ensuring it was.

Later that day he tried to explain that he meant for them to laugh, a defence so threadbare you almost felt sorry for the man. So, like many, I was very curious to see what the president would say at his solo press conference this afternoon. How would he reclaim his dignity, how would he reassert his perceived power?

The press conference was a spectacle. The president spoke for over an hour, and mostly he free associated. Each question led to a stream of consciousness response that often had nothing to do with what was asked. He talked at length about the sexual assault allegations against his Supreme Court nominee, Brett Kavanaugh, calling it a “big fat con job.”

That segued into a gross monologue on the “four or five” (there are well over a dozen) accusations of sexual assault against himself—calling the women liars and asserting that nonetheless, these women also said nice things about him.

He talked about “Donald Trump’s very, very large brain”. At least four times he said specific people had “a lot of respect” for him. Unprompted, he attacked Obama a few times. He said that millions would have died if he had not been elected.

Trump attacked Canada, Trudeau and NAFTA. He complained about the Canadian negotiators and threatened to do a side deal with Mexico. He praised Putin and North Korean dictator Kim Jong-Un. He accused China of interfering in the mid-term elections, while refusing to provide evidence to back up this claim. When asked about the laughter the day before, he explained it was “fake news.” Once again, he promised they were laughing with him, not at him. He stated, yet again, that he was respected.

Meandering, inflammatory, often mistaken or false, this press conference would have sparked several international crises if it had occurred in the first few months of his administration. But now, people (including even the journalists in the room) are mostly laughing and shaking their heads. It’s a spectacle, a troubling spectacle, but a spectacle nonetheless.

Tellingly, as the President was speaking, in Washington a bipartisan House committee reversed $10 billion of his budget cuts. Power resides where people believe it resides. And today, that was not in New York.