Trump-Putin: A summit in one act

Paul Wells: What will the Russian leader say privately to the U.S. president? Perhaps something about a little problem they have called NATO. 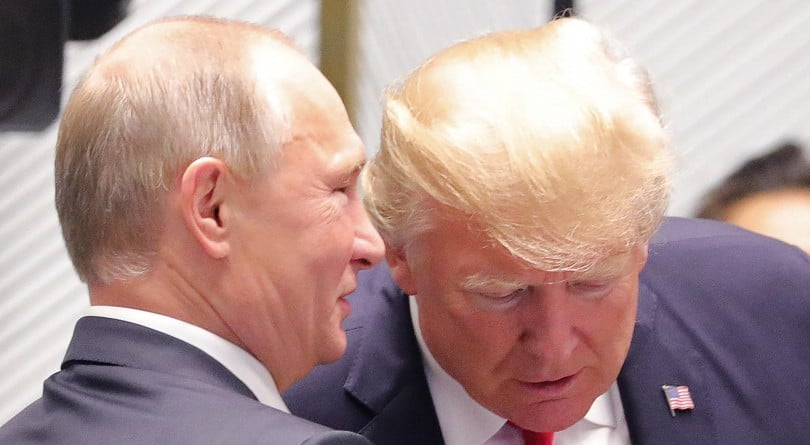 “The fear is that Trump will conduct another slash-and-burn mission at the NATO summit, then follow it up with a warm and chatty engagement with Putin a few days later in Helsinki.”

Donald TRUMP and Vladimir PUTIN file into a spacious but unremarkable MEETING ROOM, Trump first, Putin ushering him in like a gracious host. They take seats in two plush chairs, facing each other.

PUTIN: Mr. President, thank you for meeting. How was NATO?

TRUMP: (pauses, looks confused; shrugs) Well, it was hell. A bunch of slackers and losers trying to tell me how to act.

PUTIN: I really don’t know why you put up with them.

TRUMP: I know! Norway shows up, the King of Norway or whatever, maybe it was the Queen, I dunno. And they’re trying to tell me what to do with our very heroic soldiers. Norway. Nor-Way. They couldn’t get in the door at the Trump Tower, Norway, and now I have to sit through this crap.

READ MORE: Canadians to Trump: Don’t mess with us

TRUMP:  Vladimir — Can I call you Vladimir? Is that how you pronounce it? —Sometimes I feel like you’re the only one who understands me.

PUTIN: Well, Donald, other people get to run small countries. Only you and I get to run great ones.

TRUMP: The two biggest countries in the world!

PUTIN (Pauses; decides to let it slide): We’ll get to the boring topics later, with our officials. But there is one thing I want to trouble you with. NATO has been increasingly active in Russia’s neighbourhood. The Cold War is supposed to be over, but four multinational NATO battlegroups are arrayed along your alliance’s eastern border.

TRUMP (astonished): They are?

PUTIN: Yes indeed, Mr. President. From north to south: In Estonia, 1,100 soldiers led by the United Kingdom. In Latvia, 1,138 soldiers led by Canadians. In Lithuania, 1,022 soldiers led by Germany. In Poland, 1,270 soldiers led by your own United States. Estonia and Latvia share long borders with Russia. Lithuania and Poland share smaller borders with our Kaliningrad region. Until 1991, three of those countries were part of the Soviet Union; today, your armies stand on their soil, looking eastward.

PUTIN: —Like Mexico but with very good armies. But that’s not even what I want to discuss with you today. NATO’s armies in our backyard is our problem, and one day we will take care of it. But think of your own standards. Think of whom you choose to ally yourself with.

Remember the countries I just listed, the ones leading the battlegroups. The Brits in Estonia. Only last month, your own Defense Secretary, James Mattis, wrote to his British counterpart to warn that the U.K. is not spending enough on its armies.

The Canadians in Latvia. Three days after Secretary Mattis wrote to the Brits, you yourself sent a letter to Justin Trudeau to describe your “growing frustration” with their failure to spend 2 per cent of Canada’s GDP on his military.

The Germans in Lithuania. You’ve said it’s “not fair” how little they pay on defence.

You’re surrounded by allies that don’t pay your bills, Mr. President. I’m surprised. Did you tolerate deadbeat tenants when you were a landlord?

TRUMP (eyes narrowing): Why, the nerve of these people…

PUTIN: Your friend Trudeau, the one who mocked and belittled you in front of reporters as soon as you’d left the G8—sorry, G7— summit in Charlevoix? He put on another little show on the way to the NATO summit. He visited his soldiers in Latvia, to try to turn his laughable military expenditure into a big show. Like dinner theatre. Speaking of dinner, Donald, this whole thing is as though you met friends for dinner at Mar-a-Lago—only to learn when the bill arrives that they somehow all managed to forget their wallets.

TRUMP: Why, I oughta—

PUTIN: You ought to do something, Donald. For your own dignity. You used to be a formidable businessman, but now I see your own partners playing you for a chump. And over what? Crimea? A Russian corner of an imaginary country, Ukraine. For this they pick your pockets. It’s a little sad to watch, really.

TRUMP (composing himself with some effort): Well, thank you, Vladimir. You’ve given me a lot to think about. But then you always do.

PUTIN: I am grateful if I can help, Mr. President.