Matt Gurney on how he came to grapple with the incredible youth of the soldiers who died on D-Day, 73 years ago today 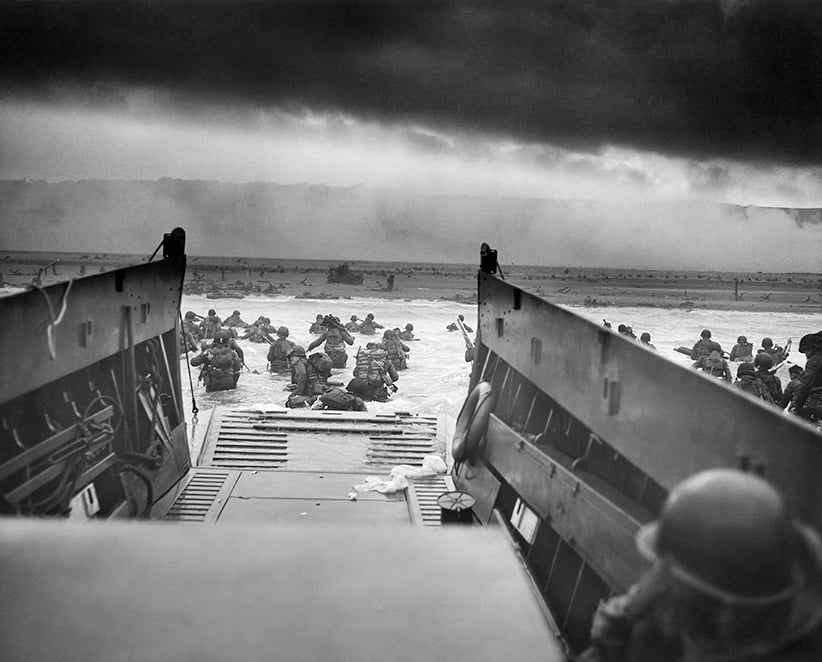 On Jun. 6, 1944, one of the largest and most complicated military operations in history began. Five Allied divisions—two American, two British and one Canadian—began amphibious landings on the beaches of France’s Normandy region, facing resistance that ranged from serious to catastrophic. Thousands more Allied troops leapt from airplanes to land beneath parachutes behind the lines of the German troops dug in all along the French coast. The entire operation was supported by a staggering naval fleet and air armada: more than 1,200 warships, thousands of small craft and more than 10,000 planes went into action on the first day alone, all to support the landing of over 150,000 men in the first 24 hours. This was warfare on a scale simply unknown to us today. This was D-Day.

History is not much in vogue these days, and military history even less so. But D-Day still occupies a prominent spot in the mind of the public, especially compared to other equally notable battles (such as Midway or Kursk) that few know anything about; the landings are elevated in society’s eyes by pop-culture touchstones like Saving Private Ryan and Band of Brothers and recreations in popular video-game franchises as much as any real working knowledge of the Second World War. People may not know much about the war, including the disproportionate casualties suffered by our then-allies from the Soviet Union or the fact that the Western allies were actually fighting on continental Europe—Italy, specifically—a full year before D-Day. But in D-Day people at least, generally, know something.

But they may not realize something that’s so important to understanding the humanity of D-Day, not just its history. The soldiers who waded ashore in the face of machine gun and artillery fire that grim day were professionals, well-trained in the business of killing. But they were also, by today’s standards, shockingly young.

This is not an original insight, I grant, but it’s one that bears repeating. It was one I first came face-to-face with as a young man myself. From a young age, I was fascinated with military history, and I devoured books on it. When I was in my late teens, enjoying myself to the fullest, it occurred to me that, had I been born in similar personal circumstances and in the same place—Toronto—only two generations earlier, my life would almost certainly have been very different. Sixty years earlier, I’d have been deemed a coward for not signing up to fight the Germans or Japanese war machines in a time when war was a very messy business indeed—a war without precision-guided munitions, drones, body armour, and Medivac choppers to whisk away the wounded. Instead, at the age of 19, I was wrapping up my OAC year of high school, where the only real expectations put on me were applying for university educations my parents would pay for and, beyond that, staying out of too much trouble.

I sort of shrugged that off at the time. It registered on an intellectual level, but not an emotional one; I was perhaps more callous and in love with myself than most of my peers, and any real emotional maturity was still years away.

And then, in my 20s, as a graduate student working on my MA in military history, I found myself reading about the Canadian campaigns and looking at the names, ranks and ages of Canadian troops killed overseas. And it dawned on me that I was already a lot older than many of these Canadian men who’d lived their full measure of life by the time they reached my age—and who, in many cases, didn’t even make it that long. But what was more stunning to me then was that by the time a man was in his mid-20s, there was a good chance that he was in fact actually commanding other men in battle. As hard as it was for me, in my university days, to contemplate giving up a comfortable and safe life in Canada to spend years at war overseas, it was utterly beyond my comprehension to contemplate commanding other men in that struggle, and sometimes, having to send them off to die.

Some of the difference in my reaction was no doubt rooted in maturity; by the time my mid-20s rolled around, life had finally knocked a few lessons through my miles-deep ego. But much of it was just the awesome realization that as horrible and frightening as war must be, at least the young soldiers could rely on orders from officers and senior enlisted personnel to keep them going. They had to conquer their own fears, certainly, but they didn’t have to do so while also managing the fears of others and trying to avoid getting anyone killed. What an awesome responsibility to put on the captains and sergeants just barely reaching their first quarter-century of their own lives.

READ MORE: D-Day: We cannot repay except by remembering

It was, and remains, a deeply humbling truth. It was hard to read the stories of these men without reflecting on just how different our lives were. When I was in my mid-20s, society had virtually no expectations of me, and I met those non-expectations with self-centred enthusiasm. I went to class, most of the time, and more or less did the assigned work. I usually even bothered to get it done on time. I was lucky enough to be born into a financially comfortable family, and was supported in my career by scholarships and campus-based work opportunities.

I don’t pretend that everyone enjoys such privileges. But by the same token, my experience wasn’t that far outside the norm. Millions of young Canadians spend their late teens and early-20s exactly as I did—drinking, pursuing romantic entanglements, travelling, and comfortably earning liberal arts degrees. This has come to be seen a normal part of early adulthood, even something healthy to be encouraged.

I don’t take the opposite view, for what it’s worth—this is not intended as a broadside against a lazy, entitled post-Boomer generation. They, and we, are the product of the times—the two generations of relative global peace and stability that followed, and were produced by, victory in the Second World War. The empathetic and history-minded among us consider this with incredulity, but incredulity is a luxury we’ve been able to afford; peace is the norm in this time and place in history. Even the horrific wave of terror attacks now striking many Western cities don’t rise to the level of a middling day of the blitz or a quiet day on the front.

The time may come again when young Canadians are expected to march right out of high school and into the armed forces to defend their country and its way of life. If so, I hope only that that day comes after my own daughter and son are too old and slow to be of much use in a fight, as their father is today.

But those are thoughts concerning the future. Today, on the 73rd anniversary of D-Day, our thoughts should be with the past. It’s one thing to understand, even a little bit, the titanic sacrifices and courage of the men who went ashore or parachuted from above that day. It’s as important, though near impossible, to appreciate just how young those men were, thrust into war and even into command, and how the blood spilled by the youth of a generation now fading away into memory means we can now ask so little of young men and women today.

Matt Gurney is host of the Morning Show on Toronto’s Talk Radio AM 640, and a columnist with Global News.