'Unplanned' and anti-choice activism, and the lies that they tell

Alexandra Kimball: For centuries, the most effective way to control women’s bodies has been to tell lies about them, forming a public narrative that permeates every level of culture 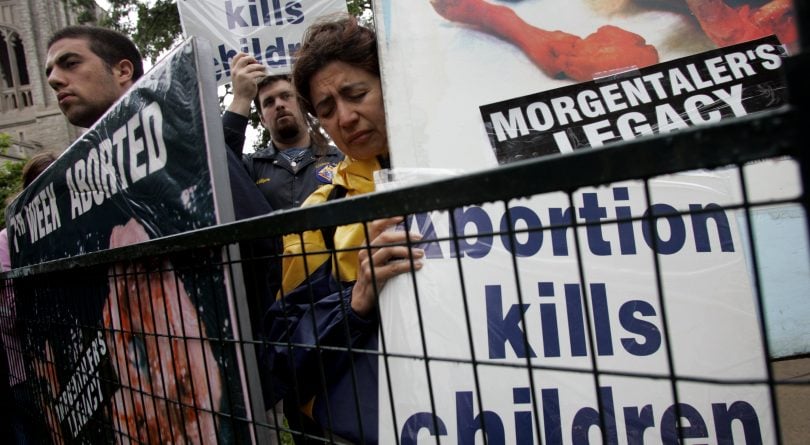 Dr. Henry Morgentaler attended a convocation ceremony at The University of Western Ontario on Thursday, to receive and honorary degree. Meanwhile, hundreds of peaceful pro-life activists, some carrying a symbolic coffin i a funeral procession, marched through the streets of London and demonstrated outside the security fencing surrounding Alumni Hall on the university grounds. Some prayed, some spoke publicly, while others just stood silently with signs of protest. (Peter Power/Toronto Star/Getty Images)

Alexandra Kimball’s first book, The Seed: Infertility Is a Feminist Issue was published in April 2019 by Coach House Books.

I had been discharged for all of half an hour when I saw them, with their fetuses: dead, bloody fetuses on signs, little plastic fetuses cupped in their palms. Normally I would rush away from anti-abortion protesters, but my incisions were fresh and I was having trouble walking, even the half-block from the hospital exit to the Uber, even with my husband’s help.

There were five or so protesters, and in order to get home I had to look right at them: the dead one on the sign and the little plastic one in a woman’s hand.

I knew these were lies.

The fetus that had just been surgically removed from my fallopian tube, like the vast majority of fetuses that are electively terminated in Canada, looked nothing like these ones, which seemed like they were between six or seven months gestation. The viscerality stunned me. I felt a wave of nausea; a ghoulish parody of the pregnancy symptoms I should have been having then, if the fetus had been in the right place; if it had been a different pregnancy in a different body.

I wondered if the protestors knew this: that there were different pregnancies in different bodies, and that there are as many valid reasons to terminate a pregnancy as there were pregnant humans themselves. I wondered if they knew that when abortion is restricted, women like me, women with medically dangerous pregnancies, die (a recent bill in Ohio reclassified medical intervention for ectopic pregnancy as “abortion,” banning private insurance companies from covering them).

Of course they knew, and I knew they knew.

MORE: The uproar over ‘Unplanned,’ and Canada’s messed up politics

Since when have these people cared about women? The fact that abortion protestors would willingly antagonize women who lose wanted pregnancies in order to stick it to those who abort unwanted ones, clarified how it was not really about the fetuses at all—it was about controlling women’s bodies, and maybe even more ominously, controlling how we saw and felt about them.

I haven’t seen the movie Unplanned, which purports to tell the life story of anti-choice activist Abby Johnson. But from what I’ve gathered, it’s 106-minute version of a protestor’s chopped-up fetus sign.

In the rightful backlash, much has focused on the fabrication of Johnson’s story, which sees her going from pro-choice feminist to pious defender of all things fetus, upon witnessing a gruesome second trimester abortion at a Planned Parenthood where she worked (the clinic has no record of this procedure; it probably didn’t happen).

But the lies the movie tells about women’s bodies (all debunked by experts) are more pernicious. They include images of a 13-week-old fetus struggling in pain for its life (fetuses are physiologically incapable of feeling pain until around 24 weeks gestation); providers assessing uncontrollable bleeding after a procedure as “routine” (heavy bleeding and tissue passing are rare medical complications of abortion that require medical attention); waiting rooms stuffed with middle-class white teenagers (in the U.S., Black and Hispanic women account for 55 per cent of abortions); and a doctor casually perforating a patient’s uterus (an extremely rare occurrence since abortion is safer than wisdom tooth extraction).

MORE: With abortion rights under attack, women are left to fend for themselves—and each other

Equally deceptive are the bodies the film chose not to include: the women who already have children who make up the majority of abortion patients in the U.S.; the women who live under the poverty line (42 per cent of abortion patients), who would be plunged into further poverty with a child to care for; the transgender men and non-binary people who face limited access to abortion; the 95 per cent of women who have had abortions who do not regret them; and women like me, who terminate pregnancies for medical reasons.

Cineplex has justified its decision to screen Unplanned at 14 theatres across Canada as a move that honours “freedom of expression.” This seems as disingenuous as a screaming 13-week-old fetus, because certain kinds of expression have always been limited—for example: defamation.

The lies Unplanned tells about bodies, fetuses and health add up to a wholesale defamation of an entire sex, though this is deliberate, I think. All lying, is about control. I’d argue that anti-choice activism is also a lie, at its core.

Throughout history, a very effective way to control women’s bodies has been to tell lies about them, and to make sure these lies form the public narrative about us.

MORE: How Canada’s growing anti-abortion movement plans to swing the next federal election

In 19th century Great Britain, the bogus medical idea of “hysteria” was used to institutionalize women who deviated from the passive, gentle idea of Victorian womanhood, and to justify excluding women from most areas of public life. The quasi-medical discourse of race science resulted in policies that led to centuries of brutality against Black women in the West—everything from rape and slavery to forced sterilizations and medical experimentation.

In some places today, the lie that menstruation makes women vulnerable and unclean justifies isolating them during their periods. These ideas didn’t spread on their own—they were repeated and normalized through every level of culture, from sermons to soap ads, from public planning to novels.

Many people opposing the screening of Unplanned are asking Cineplex: would you screen an anti-vaccine “true story” that was similarly full of lies? But a better comparison might be to a public, nationwide screening of a movie that was about how estrogen makes women unfit for office, or how Black women need less anesthesia during surgery because they feel less pain than white women. If that sounds likely, that’s the point—from the Polish MEP Janusz Korwin-Mikke calling us “weaker, smaller, and less intelligent” to Todd Akin’s idea that pregnancy is impossible in a “legitimate rape.” Defaming women by lying about our bodies is such a commonplace vehicle of casual sexism, it’s barely remarkable.

When I now think about my encounter with the anti-choice protesters the week of my ectopic pregnancy, I feel less of the sudden hurt and anger I experienced at the time than I do a kind of triumph. I had sensed then that they didn’t care about my suffering; what they wanted was to control the way I thought about my pregnancy and the fetus that I had just terminated.

At home, I joined a discussion group for women who had had ectopic pregnancies and the discourse there about fetuses, pregnancy and abortions was intelligent, sane, nuanced. I would heal from the trauma of my near-death in part because I now had the tools to control my own story—medical facts, a good doctor, and a community of other women who knew what I was going through.

It pleased me that these truths were more powerful than the lies on those signs, that they had more of an impact on me during a difficult time. The beauty of anti-choice lies in that they are indeed lies, so easy to refute and dismiss, if we have the right information.

Through the organized efforts of abortion experts and reproductive rights activists to resist Unplanned, I have seen more accurate writing about pregnancy and abortion this week than I have before. This gives women the ability to recognize defamation of their bodies when they see it—in movies, in headlines, or in the mouths of our lawmakers. These facts arm them with authority to say, I know these are lies, and I know why you’re telling them.