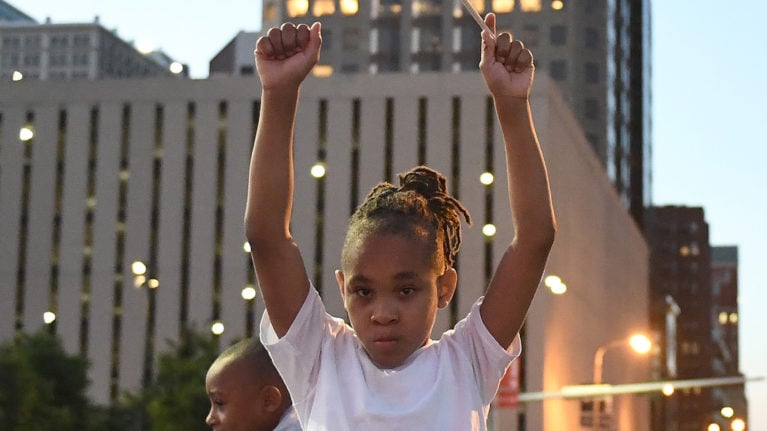 Protests across the U.S. began in May and continued into June: a young girl in St. Louis on May 29 (Michael B. Thomas/Getty Images)

It has been a century since you were born in Missouri; 75 years since you served as a Black, non-commissioned officer in the American army in World War II; 67 years since you moved to Canada after marrying my white mother in Washington; 58 years since you became the first director of the Ontario Human Rights Commission; and 17 years since you have been resting in Toronto’s Mount Pleasant Cemetery.

I remember you on Sunday mornings: you would play Count Basie on your record player, and using a miniature fork, you’d pry smoked oysters from a tin and place them onto Ritz crackers. With mustard.

After the war, when I was just 10, you told me that your own father told you that you were not made to live in a segregated nation. After you moved to Toronto with mom, you made sure that your three children knew that Canada and the United States were founded on misdeeds—stealing land from Indigenous peoples, disenfranchising and killing them, and using enslaved peoples.

Since you’ve been gone, a Saskatchewan farmer was acquitted of second-degree murder after shooting an Indigenous man, who was just sitting in an SUV, in the head. Cops are killing unarmed Black folks. The man in the White House waits for peaceful protestors to be teargassed so he can walk to a photo-op outside a church where he does not worship.

Your slender fingers ensnare another Ritz cracker. Playfully, because you laugh to survive, you drum up your most derisive term for an ignoramus and say, “That no-account in the White House is a Willy Lump Lump.

“Do not let him and his enablers out of your sight. Raise hell until the cows come home. Put more into education and anti-poverty programs. And vote that fool and all of his down-ballot folks out of office.”

Your words continue to rise out of my soul: “They have no respect for Black folks, Muslims, Mexicans, refugees or women,” I hear you say. “They seek to turn the United States of America into a dictatorship. Don’t believe it? Hitler was elected. Give that Willy Lump Lump and his people another inch, and they’ll pervert the things that we hold most sacred.”

Dad? From the Mount Pleasant Cemetery gravestone etched with the name “Daniel G. Hill,” What else have you got for me?

You switch the record to Duke Ellington, and start humming Take the A Train. “If you think it’s just an American problem, you’re a fool. In the 1950s, your mother and I could not rent an apartment in Toronto. In the past 20 years, dozens of Black, Indigenous and people of colour have been killed by police in Canada.”

I imagine you offering me a cracker. The oysters remind us of family and all the great things we miss from the United States. You lift your chin as your voice trails off: Keep up the good fight in Canada. We have the same problems here, but we’re just in denial.

Lawrence Hill is the author of 10 books, including The Book of Negroes and The Illegal.