Shannon Gormley: Countries such as Canada have waited for Beijing to come around, but the territories closest to the mainland, and thus in gravest danger from its overreaches, have run out of time 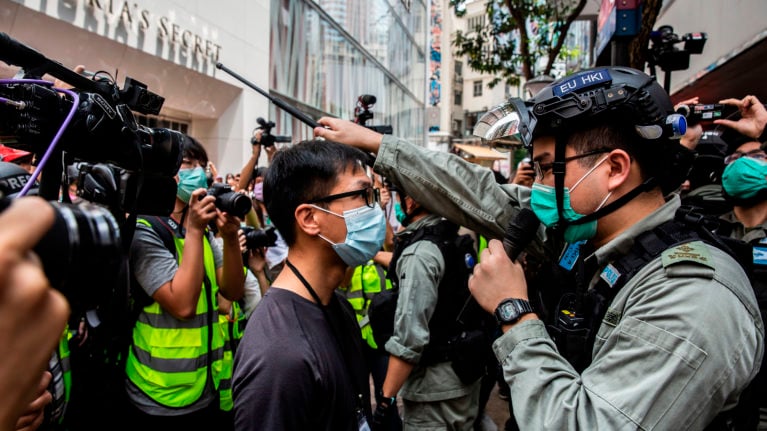 Police guard an MTR station exit near the Legislative Council in Hong Kong on May 27, 2020 (Isaac lawrence/AFP/Getty Images)

China is not going to behave well. Not toward us, not toward others, not any time soon, and never of its own volition.

Any China strategy—ours, Hong Kong’s, most anyone’s—must begin with that fact, and maybe end with it, too.

Waiting for China to change its behaviour is to wait for the worst yet to come. Its ruler admits to having global ambitions in every sense of the word. For several years, through domestic internet-censor armies and ideological conversion camps, and through overseas propaganda and influence operations, the party has sought to control people’s minds at home and their words abroad, routinely violating the boundaries of individuals and states alike.

Countries such as Canada have waited for Beijing to come around, but the territories closest to the mainland, and thus in gravest danger from its overreaches, have run out of time. Hong Kong in particular has observed that the simple passage of years has failed to inspire the Communist Party of China to realize that it is better to respect civil liberties and human rights and independent judiciaries and democratic legislatures and territorial laws and international treaties than to bend or break them. This is why, Beijing having pushed through a law expected to threaten free speech and political opposition, some Hong Kongers are no longer merely asking for the autonomy that by legal right but not practice is already theirs—this summer, in contrast to last, more protesters are openly demanding independence.

READ: China kidnapped two Canadians. What will it take to free them?

In Hong Kong, Beijing couldn’t wait more than six years before violating its 1997 handover agreement with the British. By 2003, it was pushing for a national security law that was not so very different than the one it pushed through this month. The people of Hong Kong were too smart to let it happen the first time, so the Communist Party waited until now, when the world is too sick to do much to try to stop it. In the interim, it has frequently denied Hong Kongers’ rights to free speech, free assembly and truly democratic elections.

Meanwhile, over these same decades, many Canadian politicians seemed to imagine that our rights, our values, our beliefs, were more special to China than those of the people of Hong Kong; that our standing in the world was more worthy of special consideration from China than Britain’s. And indeed we are so special that Beijing has hacked our National Research Council; intimidated and spied on Chinese immigrants in Canada; kidnapped two of our citizens, tortured them and held them for ransom; sentenced two more of our citizens to death; lied about Canadian food posing a health risk; lied about the extent to which a deadly virus—originating in the territory it governs and spread with the assistance of the lies it told—posed a global health risk; pressured us to allow a known national security risk to help us build our 5G network. And now, openly, explicitly and without any trace of shame, threatens to inflict “continuous harm” on our country.

Hong Kongers are not so vain as we. Last summer as I covered their protests, on a bridge that would soon overlook hundreds of thousands of marchers, I came across these words, posted by Hong Kongers:

In the year that has passed since those protests, China has not behaved well; in the days between when these words are filed and read, who knows how many more Hong Kong protesters China will have arrested. Who knows how many Canadian citizens or companies it will have intimidated. Who knows what it will do after that. What more do we wish it to do, before we stop doing much of what it wishes?

RELATED: Inside the fight for Hong Kong

Up until now, just as Beijing wishes, Canada has not acted with allies to force China to face serious consequences for violating its legal agreement with Britain and moral obligation to respect Hong Kong’s autonomy. Canada has not placed sanctions on its corrupt officials. Canada still has not banned Huawei; it still has not promised that the attorney general will not interfere in the extradition of Huawei’s Meng Wanzhou.

If patience is meant to be the sophisticated approach to dealing with Beijing, then we have a good opportunity now to prove how very sophisticated we are as two of our citizens continue to sit under bright lights in Chinese prison cells while Beijing officials threaten that the pain is only just beginning for Canada. But as long as the time stretches on, perhaps we can undertake such activities as building our 5G network with our allies, building stronger relationships with other countries in Asia and, most urgently, granting asylum to Hong Kong protesters who have long lived a reality that our political leaders have consistently denied.

Or, we can do nothing but wait a little while longer, and see what China does in turn.