Mark Kingwell: The U.S. seems to lack the will to beat COVID-19, indulging instead in a 'cult of selfishness' that means the country fails the marshmallow test. But research states we'll all fail the test sooner or later. 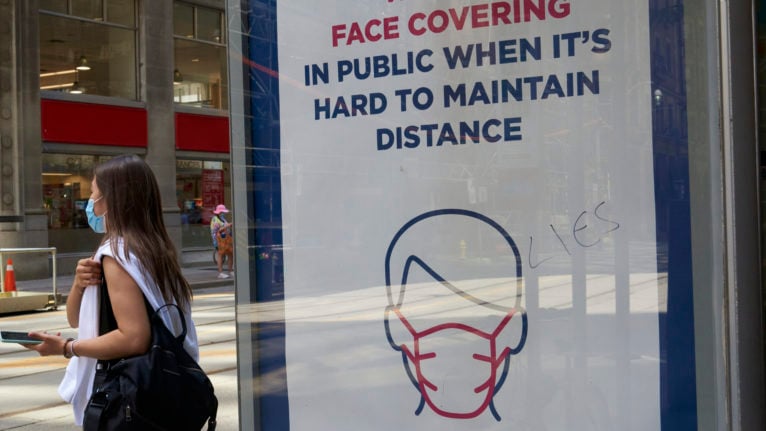 A woman holding a cell phone stands near a vandalized sign reminding Torontonians to wear face coverings in public when it’s hard to maintain distance on Aug. 5, 2020. (Rachel Verbin/CP)

Mark Kingwell is a professor of philosophy at the University of Toronto and author of Wish I Were Here: Boredom and the Interface, which won the 2020 Erving Goffman Award.

What are the contours of happiness when time warps and planning is shot through with unknowable contingencies of risk? Consider that question in terms of some famous marshmallows.

In the 1960s, Stanford University psychologist Walter Mischel began experimenting with children using a simple test. A child is offered a marshmallow, then told she or he can either eat it right away, or wait 15 minutes. If the child waits, they’ll get a second marshmallow as a reward.

Holding out for the second marshmallow has been considered a benchmark of both willpower and future orientation—two key elements of success. It has also been used as a handy metaphor for self-control generally, most recently by Nobel laureate and columnist Paul Krugman. His recent columns in the New York Times argued that the United States “lacks the will” to beat COVID-19, indulging instead in a “cult of selfishness” that means the country “fails the marshmallow test”.

I happen to agree with Krugman about the cult of selfishness, but marshmallows may not be the best example here. The original Mischel test doesn’t actually support the conclusion most people take away from it. Three psychologists—Greg Duncan and Haonan Quan from UC Irvine and Tyler Watts from NYU—conducted more recent and wider versions of the test. Their study, published in 1990, added both a larger test group and controls for the income levels enjoyed by the subjects.

They found that the ability to delay gratification had more to do with secure social and economic position than with innate strength of will. More damagingly, the results showed that childhood self-control correlated poorly with later success. Many two-marshmallow kids failed in later life anyway, either over-protected or under-protected by their social status.

In short, opting for the immediate marshmallow might just make more sense, both for people with lots of security and for those who can’t foresee a stable tomorrow. The paradox for policy-makers today is how to appeal to these short-term desires in order to secure better long-term outcomes. If we want Canadians to be good public-health citizens as the economy kicks into gear and schools open, we must appeal to them less in terms of deferred pleasures and more in the frame of what feels good right now.

This task is especially urgent when the long term can seem beyond the horizon of imagination, and where daily small pleasures often loom larger than delayed ones. The precariousness of life has generated anxiety, depression, and even desperation among those who see their futures, down to their next rent cheque or grocery run, dwindling to nothing.

MORE: The COVID-19 pandemic is remapping childhood—and the effects may linger

Right on cue, another psychological study, just released, confirms the centrality of immediate hedonistic pleasure in human behaviour. It suggests that the standard moralistic program of self-denial—sacrifice now for better outcomes later—is a species of victim-blaming, as when addicts are shamed rather than supported. It’s at odds with baseline human psychology.

Katharina Bernecker of the University of Zurich and Daniela Becker of Radboud University studied the capacity of people to seek short-term pleasures, and whether subjects related these pleasures to general well-being. They found that people who were able to experience enjoyment in the moment had higher overall happiness, even over the long term, and likewise suffered lower rates of anxiety and depression.

I doubt any of that is on the minds of the people who are right now drinking in bars, having big cocktail parties or going to Smash Mouth concerts—but that’s the point. It’s not just the devil-may-care drunk-driving crowd who are flouting current public health measures. The very rich, who might once have waited for the second marshmallow because they knew there were always more marshmallows in the cupboard, are indulging immediate gratification these days because…well, they can. Their private health plans and private-school bubbles will buoy them up no matter what happens.

Of course, during a global pandemic, living in the moment might just mean a quick end to the succession of moments that we call life—yours or some else’s. And in addition to pure public health risks, when immediate pleasure is fuelled by consumption, affluence and greed become global risk factors beyond just privilege pods, generating class tension and stripping the environment of its ability to sustain life, a classic tragedy of the commons.

Maybe self-control is not actually an inherently ethical trait, just something we now and then find useful to achieve desired ends like sustainable career goals, robust savings accounts or better health. Even then it doesn’t always work. We’re all built to fail the marshmallow test sooner or later. Fine, if risky. When these failures create community damage, though, we are forced to ask: what can be done?

The answer probably isn’t trying to get people to be better long-term planners, whether by scolding or argument. People who hate to plan for the future are not going to be moved to be better citizens by nasty signs in shop windows, or through sidewalk confrontation. Now that the issue of mask-wearing has been comprehensively politicized, we have ample evidence that refusal to comply to with public health directives is no longer about self-control at all, but instead figures as an expression of freedom or presumed right to choose. Live free and (others) die!

No, the way forward has to be measures and trends to make long-term public goods more attractive in the moment. A trail of marshmallows might be made to lead to an overall positive outcome for everyone. So how do we start?

In some contexts, social scaffolding and nudging are used as small curbs on unhealthy choices: regulating the size of soft drinks, or getting rid of trays at fast-food restaurants to discourage overeating. Environmental shifts help addicts by limiting access to drugs rather than insisting on individual willpower to resist them.  One famous example is that an image of human eyes pinned over a shared office refrigerator works to deter freeloaders and lunch thieves. (This is true.)

Masks and hand sanitizer will never be cool, but free masks in public places lower opportunity costs, even as old-fashioned disincentives like barring entry to public transit or indoor establishments, with associated fines, function as poised sticks. That’s why most jurisdictions have adopted versions of them. Alas, enforcement still falls mainly to hapless counter staff or checkout clerks.

We could use more carrots, not more sticks. Studies have shown that the almost universal adoption of seat belts was driven more by nagging youngsters than by admonishing buckle-up signs. Cranky children may not be everyone’s idea of a positive incentive, but the relief of achieving child happiness surely is. This doesn’t work if there are no kids around, of course, and it’s not foolproof because there will always be fools.

How about adding tax breaks, rent waivers, or grocery vouchers? (Enforcement is once more an obvious problem; how do we know if someone is wearing a mask or washing their hands at a given time?) Rewards cards for future discounts might work better, or price cuts for online shopping. Universities have adopted honour-code pledges for students that hold them accountable to social distancing and quarantine measures. These work to make safety subject to peer pressure, then tipping into habit and if we’re lucky, social conscience.

We can have only limited confidence in these measures: there will always be scofflaws and refuseniks. Changing people’s habits and beliefs is uphill work. Like drunk drivers, single-marshmallow gobblers won’t be eradicated by wishing them away or judging them harshly. As always, we have to work with what Immanuel Kant called “the crooked timber of humanity,” out of which no straight thing was ever made. But maybe we can bend what we can’t straighten. Any and all ideas welcome!