We need leaders, not leading men

Scott Gilmore: Donald Trump and Justin Trudeau are both committed performers playing different roles, but neither of them actually lead 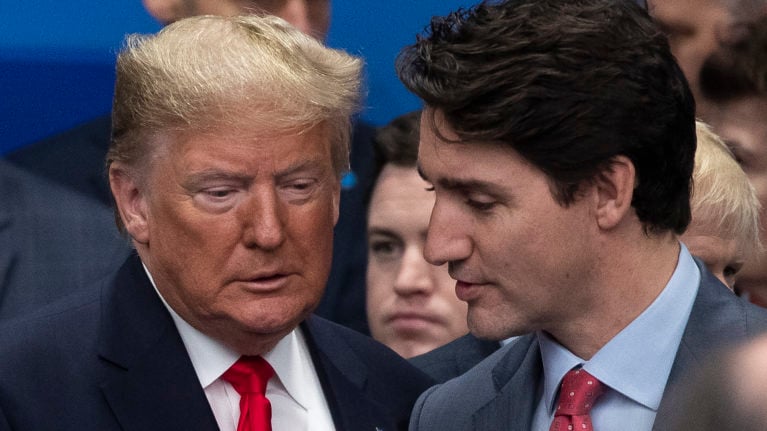 Trump and Trudeau attend the NATO summit at the Grove Hotel on Dec. 4, 2019, in Watford, England (Dan Kitwood/Getty Images)

Donald Trump, the president of the United States, is often derided as a reality TV star. A more accurate description is that he is a talented performer, who is using that skill to play the role of strongman president.

Trump’s history as a performer is expansive. He has been playing blockbuster roles his entire career, fabricating personality traits, property deals, and romantic successes as well as any Tony Award winner. He’s a method actor who always stays in character, always playing the tough guy, the genius, the saviour. Although, perhaps he has a bad habit of relying too heavily on face paint and hair.

If Trump is Broadway, Trudeau is more community theatre. His performances are on a smaller scale—he doesn’t play the conquering hero so much as the sensitively written romantic lead in a two-act drama about personal growth. And, perhaps, he also has a bad habit of relying too heavily on face paint and hair.

Right now, these two men are playing their masterpiece roles as national leaders. Of course, we are all actors, consciously or otherwise. When we call our friends, have dinner with our families, or go to work, we all adopt different personas, some more subtly than others. It’s human nature—if you are going to be a mom, you have to act motherly. If you’re going to be a leader, you have to act like one.

READ MORE: Who are the Trump-loving Canadians?

What distinguishes Trump and Trudeau from most of us, and all of their respective antecedents, is their committed emphasis on the melodramatic performance. When Trump struts out on stage, every move and inflection—from the thrust of his chin, to the never-smiling face—broadcasts the idea that he is a glorious, heroic man. Likewise, when Trudeau steps in front of any mic, his every pose and pause conveys that he is a caring, inspiring man.

Their acting abilities do not work for everyone. For every American who admiringly applauds Trump’s monologues, there are two others who roll their eyes at the obvious histrionics, the fabricated anecdotes and the false swagger. And for every Canadian who is moved by Trudeau’s empathetic words, and touched by the care and concern on his face, there are two others who turn off the radio because they can’t take another minute of the toastmaster delivery with the seemingly <pause for effect> random emphasis and the breathlessly <pause again—eye contact> stirring emotional crescendos. Regardless, the Trudeau and Trump acts work well enough to have made both G7 leaders, which we (dear reader) are not.

Each of them were very much on stage and in the spotlight this week. Trump stood in front of a church, bounced a bible upside-down in his hands, posed unsmiling for the cameras left and right, and play acted as righteous warrior, defending order from chaos. Trudeau stood in front of Rideau House, shook his ever-longer locks, and (after being asked about Trump’s photo-op) deployed a 21 second “dramatic pause” to convey the great but necessarily unspoken thoughts stirred deeply within.

Some have suggested Trudeau’s long silence was just evidence he is a fool, that he was struggling to find an answer. Now, you may not like the Prime Minister, you may despise every idea that comes out of his mouth, but unless you have a terminal case of partisan brain rot you must concede he is not an idiot. Among his many talents is an almost preternatural fluency in the meaningless soundbite. He has shown countless times he can effortlessly bat away even the most impossible question with eloquent words that, once parsed, are later found to be either completely hollow or so plastic they can be bent into any shape the listener wants. The 21 second pause was not a stumble—it was a dramatic choice to communicate depth and feeling, albeit one that may have missed its mark.

The acting styles of the two leaders reveal differences. Trump’s performance inadvertently exposes that he is a sociopath—he makes character choices that lack humanity and are needlessly cruel. Trump doesn’t want to be liked, he wants to be feared or envied.

Conversely, Trudeau’s constant performative empathy reveals that he is someone who doesn’t just want to be liked, he wants to be connected. He doesn’t crave respect, he wants to be loved.

Another difference is in how they have developed their individual characters. Trump’s is constantly reset—like he is on a sit-com. It doesn’t matter what happened the day before, or what was said just hours earlier—the premise for his latest bit depends only on what is happening at that exact moment, like improv.

Trudeau, however, has a slightly wider lens, and sees his character going through seasonal arcs. One year the theme is Indigenous injustice. The next year that entire storyline will be forgotten as his character goes on a journey exploring climate change.

But their acting styles also make it clear there are many similarities, too. Chief among these is that Trudeau and Trump both understand the public wants to be led by characters, not people. We do not want leaders who are fallible and unsure, worried and a work in progress. We want the certainty, strength and purity only found in fiction. All politicians instinctively know this, but few have embraced the idea so fully and undertaken to deliver that fiction as completely as Trump and Trudeau.

A more important truth revealed by both their performances is that nations need leaders, not leading men. The United States is staggering under the bloody weight of history, and is desperate for someone to show them a way forward. And Canada continues to waste the blessings of our good fortune, and we so badly need someone with the vision and ambition needed to fix the broken lives of the least fortunate among us. Perhaps it’s time to end these shows, for each country to see these actors off the stage, and for us to once again put real leaders back in office.