We should celebrate Canada's British influence, not denounce it 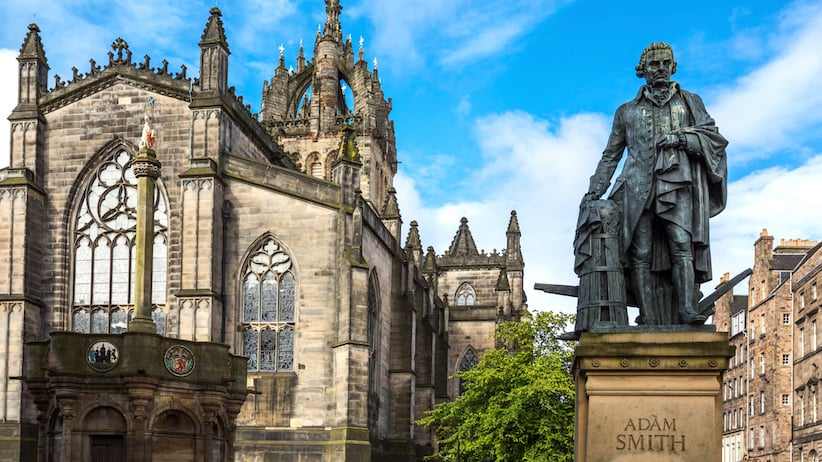 A monument of Adam Smith in Edinburgh, Scotland (iPhoto)

Five years ago, when I visited Hong Kong on think tank business, almost every politician, civil servant and business person I met emphasized two priorities vis-à-vis the regime in Beijing: How they in Hong Kong wished to retain capitalism and the rule of law.

The comments stood out because I’d never heard a Canadian civil servant or politician express such sentiments. But I recall them now for another reason: Because British influence mattered and positively so, not only in Hong Kong but, I would assert, in Canada.

For Hong Kong, the desire to retain the rule of law and free enterprise are utterly understandable today to anyone who looks across the territories’ border to the crony capitalism and politicized courts in China proper.

But the mostly beneficial British presence between 1841 and 1997 is also worth recalling given what Hong Kong escaped under British governance: China’s turmoil, civil war, communist insurrection and then murderous Mao-Tse Tung policies. In short, the population of Hong Kong was spared the worst excesses of what 20th-century China endured while the United Kingdom governed the territory until July 1, 1997.

By coincidence, July 1 was not only the 20th anniversary of the British handover of Hong Kong to China but was, of course, the 150th anniversary of Confederation in Canada. Regrettably, there was a plethora of hand-wringing commentary that doubted and outright damned Canada’s birthday as not worth celebrating. I take a very different view: That Canada and her British heritage are infinitely valuable and worth every birthday candle that can be lit.

Be it Hong Kong or Canada, three British influences should be recalled and celebrated: The emphasis on free economies, free peoples and intellectual freedom.

Let’s start with economics as it relates to Canada: Pre-1867, when the Fathers of Confederation worked to create a free trading dynamo on the northern half of the North American continent (one key reason for Confederation) John A. MacDonald, George Brown and the others breathed the assumptions of Scottish economist Adam Smith. As historian Arthur Herman has argued, once you get past the clichés about Smith (“laissez faire,” a term he never used), it is clear that Smith saw a role for government in what might be termed basic functions—“essential public works, such as roads, bridges, canals, and harbors” writes Herman, and also education and national defence among other defensible expenditures.

Beyond that, the stereotype of Smith as skeptical of interventionist government—was correct. It came from his understanding of how state power and special interests interact. They combine to serve each other and not the public good: Government-business collusion raises costs and produces inferior goods and services. That negative outcome is why Smith favoured open, free markets: because choice and competition force business to attend to the needs of consumers and their pocketbook rather than the reverse.

Smith’s idea, and Great Britain’s initial practice of it, thus provided a critical intellectual and practical foundation for free economies the world over. Cast a glance back to Hong Kong in the 20th century where its relatively free market contrasted with China in opportunities and wealth creation. In 1975 for example, one year before Mao died, per capita income in Hong Kong at $6,991 was eight times the $891 figure in China. (Both figures are in 1990 international Geary-Khamis dollars, a currency used by economists to compare the purchasing power on money across countries.) Hong Kong’s success was to Great Britain’s credit.

Smith’s preference was also evident in early pre-Confederation history in Canada. One example:  In 1865 and 1866, as New Brunswick parliamentarians debated the possibility of Confederation, one of them, John McMillan, looked to Great Britain and its practice of free trade as an example. McMillan thus favoured a free trading confederation of the provinces. “To enter into an alliance that will enable us to have free trade with our neighbours” he remarked, “would be commercially the best step we could take.”

On liberty, one does short shrift to other accomplishments by mentioning only one example, but consider Britain’s greatest accomplishment in the field of freedom: Abolishing slavery at home, then in its empire (as of 1833) and battling slavery elsewhere.

Given British sentiment, it was thus no accident that abolitionist assumptions from the late eighteenth century onward made British North America the destination point for slaves fleeing American shackles. Perhaps the best example: The Underground Railroad which transported between 30,000 and 40,000 escaped black slaves to British North America.

But there are other examples of British abolitionist attitude in practice. Unpopular as it is in some circles today to note historical facts which conflict with romanticized history, the British also abolished slavery in the Pacific Northwest among Aboriginal communities. Anthropologist Donald Leland in his 1997 book, Aboriginal Slavery on the Northwest Coast of North America, wrote of how “Slavery was a permanent status in all Northwest Coast societies”—that is, until the pre-Confederation British and later Canadian officials (along with Americans on the Alaska side) put an end to the practice. (For the record, slavery in the Pacific Northwest developed at some point between 500 B.C. and A.D. 500, long before European contact, and it took the British until the end of the nineteenth century to completely stamp it out.)

That British notion of personal liberty, key to its battle against slavery, also diluted the-then importance of creed and colour in other areas. On citizenship, for example, we possess British assumptions. They result from a long tradition of practical thinkers and then advocates and politicians who expanded the scope of what was possible on matters of conscience, practice, voting, citizenship and then representation. Recall that in 18th century Britain, and still in many nations today, the possibility of full citizenship was restricted due to one’s faith—if one was Catholic or Jewish, for example.

But that did not last forever and expanding freedom here resulted from British writers and parliamentarians who argued against historic prejudices. Thus Catholic emancipation decisively occurred in 1829 when Catholics were finally allowed to sit in parliament at Westminster. (In Canada, Catholic emancipation occurred six years earlier. Laurence Kavanagh, a Catholic, was the first such representative to sit in Nova Scotia’s legislature, the House of Assembly, in 1823.) British Jews were emancipated in 1858 with the first Jewish Member of Parliament taking his own seat in parliament that year.

One Englishman, John Stuart Mill, pushed ahead such freedom-expanding assumptions and actions in the ensuing decades courtesy of his 1859 book, On Liberty. It is still worth reading for its defence of intellectual freedom, including the right to question beliefs one might assume should never be debated again: “The beliefs which we have most warrant for, have no safeguard to rest on, but a standing invitation to the whole world to prove them unfounded,” wrote Mill, in defence of the need to criticize established opinion.

In On Liberty, he also helped along women’s equality and thus suffrage—“wives should have the same rights, and should receive the protection of law in the same manner” wrote Mill, who labeled the denial of such rights as “evil”.

A caveat but in perspective

There is a caveat in all this and it should be stated frankly: Not all that Great Britain did or represents was without blemish. That point is often overstated today and in black-and-white assumptions, accusations and language—plenty of examples cropped up on July 1.

But there were indeed wrongs and grave sins. For example in China and Hong Kong the addictive, destructive opium trade was protected by British policy; the ongoing denial of political liberties in Hong Kong until near the end of British rule was a blemish on an otherwise excellent record for individual and economic liberties.

Similarly, the bigotries of an initially British-run and later British-influenced early Canada harmed those not of the majority faith and ancestry. Aboriginal Canadians, while arguably less harmed under British rule when compared with American policy—one damns with faint praise here—were still the target of prejudiced legislation. One example: the right to vote was only restored to Aboriginal Canadians in 1960 by Prime Minister John Diefenbaker’s government.

But the easy criticism often expressed today in demands for apologies, or the re-naming of buildings with British (or French) heritage, or any number of additional attempts to damn the past through Orwellian “memory hole” actions, miss two useful points about British influence:

First, when looking back, one should always compare to local alternatives available at the time and not perfection. Compared with the tyranny of Chinese communism or even on its own merits, Hong Kong was a beacon of freedom and prosperity. One should consider the entirety of British imperial rule and avoid the twin extremes of either unrealistic romanticization or wholesale condemnation.

Avoid the extremes then and a second point becomes clearer: what Great Britain began is of greater importance than whether it fully, perfectly practiced an ideal.

Perfection is not given to men and women and the “working out” of British ideals on liberty mattered: The right to property courtesy of the 1215 Magna Carta; the limits on monarchical sovereignty and thus on tyranny best exemplified in England’s Glorious Revolution in 1689; Great Britain’s embrace of freer markets over French mercantilism and Spanish and Portuguese colonial “extraction” economics; the long British tradition of the rule of law; the battles against slavery including in Aboriginal societies; and finally, Britain’s centuries-long expansion of the notion of rights which allowed for progressive emancipation of Catholics, Jews, women and eventually Aboriginal Canadians: Recall the actions of the 20th century’s most devoted anglophile prime minister, John Diefenbaker.

The many British contributions to Canada are perhaps best encapsulated by then opposition Liberal leader, Wilfrid Laurier in an 1894 speech in Winnipeg. Laurier was attacking an economically protectionist Tory policy. In so doing, he referenced and praised the contributions of the Anglo-Saxons which he summed up as a preference for freedom: “The good Saxon word, freedom; freedom in every sense of the term, freedom of speech, freedom of action, freedom in religious life and civil life and last but not least, freedom in commercial life.”

But whether those or others, the legacy of Great Britain was critical to Hong Kong’s prosperity and now its liberty-assuming norms in a variety of areas.

Great Britain’s even deeper legacy on this continent and the “germ” of extensive checks on power and self-replicating expansion of core liberties is what allowed for a full flowering Canada to become Canada. Contra the critics, that British influence should be celebrated this summer and for the next 150 years.

Mark Milke is an author, columnist and president of the Sir Winston Churchill Society of Calgary