Sahil Gupta: As a society, we need to move beyond the Band-Aid response of wellness checks. The first step is a humane approach with mental health teams. 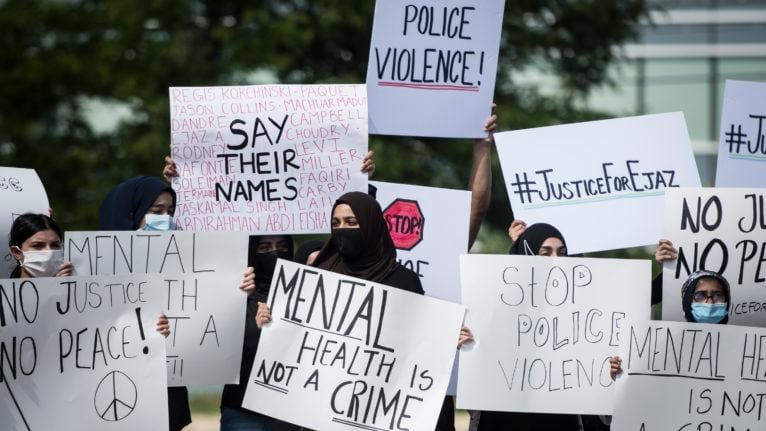 People hold signs in solidarity during a rally for justice for Ejaz Choudry, a 62-year-old man who was recently killed in a Peel Regional Police-involved shooting, in Mississauga, Ont., on Jun. 27, 2020. (Tijana Martin/CP)

Sahil Gupta is an emergency room doctor and freelance health writer based in Toronto.

Her son had been banging on one of the walls for hours. He wasn’t settling down on his own. Part of the living room wall had been caved in. After fearing for her son’s safety, as well as her own, this mother eventually called 911. The police officer responding to the call handcuffed the patient—he was afraid that he might run away. Then he brought him to the hospital for a psychiatric assessment. While this is a hypothetical case, as an emergency room doctor, it’s a scene that I often see play out for people suffering from mental distress.

For those having a mental-health crisis, most emergency responses start with the police, not health-care providers. These 911 calls, often made by family members or bystanders who are witnessing someone acting bizarrely on the street, are known as “wellness checks”.

Wellness checks are part of an emergency response process that traumatizes the person with a mental illness without addressing the root cause. Instead we should think about how to change the response to these calls altogether.  We need alternate spaces to take people who are in crisis, and a non-police response as standard instead of the current model of catch and release. Mental health professionals must be involved right from the start.

MORE: What the pandemic taught me about my son’s loneliness

I am part of the revolving door of care for many patients who have been through wellness checks. People experiencing mental health distress are transported to the hospital because there’s nowhere else they can go. Depending on the patient’s level of agitation when they arrive, they are given a sedative to calm down. Most of the people I meet in the emergency room have felt suicidal or agitated in the past.

The Toronto Police Service conducts over 30,000 wellness checks every year. Edmonton Police Chief Dale Mcfee estimates that 30 per cent of their calls relate to mental health problems like schizophrenia and anxiety, or addictions like alcohol and crystal meth. Recent incidents, including the deaths of Ejaz Choudry in Mississauga, Regis Korchinski-Paquet in Toronto and Chantel Moore in Edmundston, N.B., which occurred during wellness checks, have put a spotlight on police interactions with people in crisis.

These crises range from feeling suicidal during an anxiety attack or being restless after using drugs. When the one who is agitated threatens self-harm, they’re deemed a threat to themselves and restrained under the province’s Mental Health Act. Each province has its own variation of this act. Outside the hospital, this legislation allows police officers to apprehend, restrain and bring the person to hospital. The situations are often tense and rife with misunderstandings.

MORE: The unsustainability of modern life and how COVID-19 may be exposing cracks in our society

When the calls take a negative turn, they’re sometimes lethal. Between the years 2000 and 2018, there were 470 deaths related to police encounters, and 70 per cent of the people that died suffered from mental health or substance use issues. Even successful interventions are inadequate as they fail to address the chronic problem of an under-resourced mental health system. Wellness checks try to diffuse a heated situation with police intervention or a visit to the hospital. But providing psychiatric care to a patient or giving them access to safe housing can take months to years.

When people suffering from mental illness are faced with security or police officers, there’s an inherent power differential. The police officer is usually armed and can carry out an arrest; the victim is often disoriented and scared. If there’s a rigid response from a police officer, where the person is asked to stay in the confines of a room, for example, the situation will escalate.

There are de-escalation techniques used to calm people during these moments. Recognizing the influence of drug use and mental health on someone’s behaviour is one key step in the process. It’s a specialized skill set that often includes giving the one who is suffering some control and some degree of choice, even when they act irrationally.

The need for skilled de-escalation is especially true for racialized people and those who have faced previous trauma during interactions with authorities. These communities face discrimination from both the criminal justice and the health system, on top of their mental health problems. Many have faced similar experiences of injustice and systemic racism before, and they fear violence or criminal charges.

In the hospital, as patients begin to feel calmer after their crisis, they’re given information on addiction and mental health services. They are then asked to leave and fend for themselves. That means navigating a complex mental health system; a system that’s built to provide a medically-supervised “time out” but that cannot solve structural problems like homelessness, generational trauma and poverty that people face. Some don’t even have mobile phones or a safe place to store information that hospitals pass along. Many need access to case management services or housing, which are challenging to arrange from the ER.

After a wellness check, patients don’t forget all the things that happened to them in the process. They remember being handcuffed, the violence used to break down their doors, or waiting in a busy emergency room with the police. Yet they’re expected to behave as if these events hadn’t taken place. As a society, we need to move beyond the band-aid response of wellness checks. The first step is a humane approach that doesn’t start with the police, but instead with mental health teams.