Opinion: On their own, smartphones aren't necessarily a problem. It's how they're being used that's troubling—and who is making us use them that way 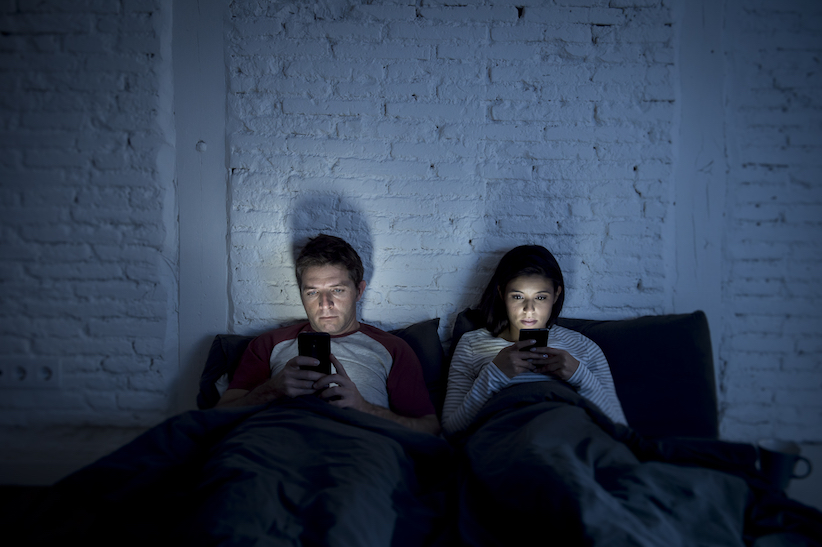 The later it is at night, the more embarrassing the confession. So goes the rule. And on this particular night, as a group of friends and I talked about how we try to stop relentlessly looking at our phones—keeping Twitter and Facebook off one’s device, or silencing all notifications, for example—someone piped up: “I’ve managed to stop taking my phone to the bathroom.” We murmured our approval, impressed at his restraint.

At the point that a trip to the loo without a phone is almost an act of bravery, it seems fair to ask: are we addicted to our phones? It almost seems too obvious to say yes. Our lives are full of stories of people who cannot stop checking Instagram, or texting, or a host of other things—and chances are, we recognize that affection for our phones in our own lives, too. We are also talking about it more, sparked by new phenomena like “phubbing”—ignoring people in face-to-face social situations in favour of checking our phones—as well as by buzzy books like How to Break Up With Your Phone: The 30-Day Plan to Take Back Your Life, and various apps that either track or limit how much we use our phones.

But are we really addicted to those little slabs in our pockets? As Canadian technology writer Ramona Pringle likes to argue, we aren’t quite addicted to phones exactly: we are addicted to each other, constantly seeking out connection through our devices. If there is an excess at play, it is an excess of humanity—and that’s to say nothing of the almost incomprehensible wealth of information and art we can access through our little pocket computers.

Criticism of new forms and new technologies, after all, is hardly original. During the rise of the novel in the 18th century, having one’s nose buried in the then-new technology of a trade paperback was considered idle and wasteful—in no small part because novels were considered to be for women, and therefore supposedly unimportant. But now we see novels for what they are: some of our greatest artistic explorations of meaning and beauty.

Something similar might be said of phones. If we are addicted to our phones, it’s not because of the devices themselves—it’s because there’s something on them worth looking at. Most obviously, the smartphone connects us to others, stitching us into each others’ lives through the connective tissue of social media. We gain an ephemeral, ambient awareness of what our friends and family are up to, regardless of where they are, and at its best, this persistent socializing can envelop us in a blanket of connection.

Too often, critics of technology dismiss what appears on screen as ephemeral and meaningless. Beyond the obvious rejoinder—that one can in theory just as easily read Islamic philosophy or math treatises online as one can do a quiz about what kind of pie best reflects your personality—there is the more basic fact that phones open up spaces of connection, and with minimal effort. Consider the trans teen in the suburbs, or the Muslim mom in Northern Ontario; a phone allows one to connect with other like-minded folk. Critics who blithely dismiss phone usage itself as inherently self-destructive or meaningless miss how they can produce new communities and homes. So it’s no wonder people can’t stop looking at their phones: They have access to the whole world and everyone they hold dear.

But there is a problem with these sorts of defences: they miss the aggregate effect of all this connection. We now know, for example, that persistent use of Facebook can adversely affect your mental health. Constant debate online can leave one drained and distracted, and the phenomenon is particularly acute in the sped-up, hyper-polarized context of today’s politics in North America. And any smartphone user must admit that there are times when they’ve picked up a phone for no particular reason—moments in which one might otherwise reflect, or merely let the machinations of one’s mind play out.

READ MORE: Why we need to clear out our cluttered minds

The problem for both sides of this debate, however, is that the exact same behaviour can have radically different consequences depending on context. For one person on a certain day, spending the day glued to a phone can be rewarding and healthy, as they chat with friends, learn new things, and perform errands. But for another person, the same tasks may be exacerbate mental health troubles, or distract them from important tasks, and leave them worse off.

Just as it makes little sense to criticize books or TV themselves as forms—it instead being far more sensible to critique individual books, shows, or trends—criticizing “phone addiction” can’t account for both the enormous variety of what we use phones for, or how the situation and mental state in which we use them can drastically change the effects of using them. The problem isn’t phones, it’s the context in which they are used—and that context is often deeply personal.

More broadly, the debate also usually undervalues the degree to which the smartphone represents a historical transition from the era of print and TV to the digital era. A decade ago, very few people knew what a status update was. Now, over a quarter of the world’s population—more than the entire global population of the 1920s—is on one company’s social network. There are billion Apple devices in the wild, and about twice that number running Android. Those numbers represent unprecedented, mind-boggling change. It’s the kind of shift that also makes it harder to see the forest for the trees. Our constant poking at our phones is a historically novel phenomenon we are still coming to grips with, and simplistic cries about the corruption of a pure, analog world do little to help.

Making matters worse, however, is that as the scale of the change in our daily lives has dramatically increased, so too has the sheer number of people whose reality is being mediated through the lens of private companies. The trouble is that phones—and more importantly, the services on those devices—are designed to induce compulsion, running on an attention economy that relies on first extracting data, and then catering our desires with it. Our smartphones notify us with beeps and buzzes, always pulling us back in. As Apple always exclaims, they design their devices to cultivate a sense of pleasure. We have eagerly adopted devices that cater to human desire and our lust for novelty, and in doing so, have allowed a few large organizations on America’s West Coast to create a new form of social infrastructure through which we increasingly conduct our personal and professional lives.

That kind of concentration of influence and power should be worrying. Think of it this way: what if books, rather than being an aesthetic presentation of narrative and ideas, were instead designed to be reflective of the interests of a set of private companies, interspersed with ads and structured to induce compulsive use? What if you couldn’t buy them without handing over personal data? It sounds dystopian, but that is exactly the situation we find ourselves in with the smartphone, where perhaps the most significant technological change in a generation has left a society at the whim of groups who, despite their best intentions, often don’t have our best interests at heart.

If our phone addiction is in part a function of both the plethora of connection and information, and the seductive allure of such excess, it is underpinned by a group of companies whose economic model is attention. Facebook, Twitter, Snapchat and more all function by trying to maximize engagement and keep people using their sites and apps as much as possible. Far more than discussions about the inherent good or bad in phones—of whether a book is in fact superior to a screen—we should talk instead about how internet giants, and their domination of the market, are at the root of smartphones’ most toxic effects. It is they, after all, who have structured a world on attention. It is easy to forget that there was no fundamental reason that the smartphone had to become an engine of distraction, or a machine meant to serve ads and capture our time—it is simply how they’ve been designed.

So are we addicted to our phones? It’s the wrong question—because it’s a meaningless one. What we must ask instead is: What are we addicted to on our phones, and why? Is it merely a screen that is compulsive? Or is it the promise of another like, or another new joke, waiting there as soon as we unlock our device?

Sitting there late at night, perhaps in the glow of a phone while lying in bed, pawing at a screen, what one is seeking is connection—but it is a desire that has been hijacked by the economic drives of enormous companies whose massive wealth has been built on exploiting our desire for the next thing. The brave thing will be not be leaving one’s phone behind; it is too late to put the digital genie back in the box. It will instead be reclaiming our screens from these giants—keeping our most intimate moments free from their prying eyes, and finding ways to devote technology to more human ends.