Rick Smith: America is moving ahead with an ambitious plan that goes beyond talk. This would be a good moment for Canada, the climate laggard, to do something new. 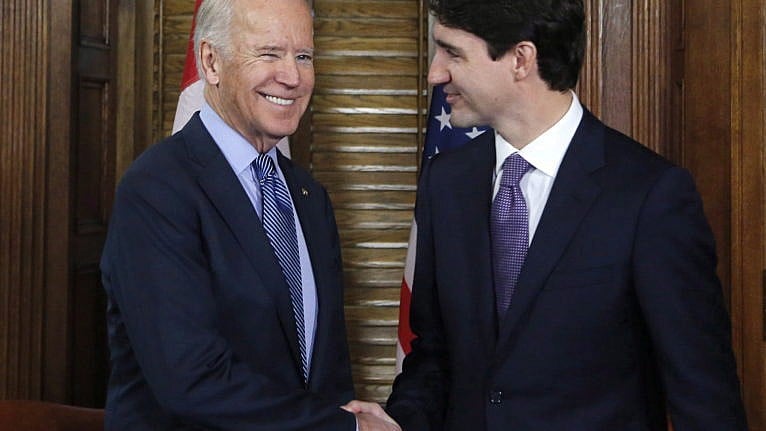 Rick Smith is Executive Director of the Broadbent Institute and co-author of two best-selling books on the impact of pollution on human health.

With the election of Joe Biden, Canada suddenly finds its neighbour and biggest global ally has gone from zero to 60 on climate change action almost overnight.

For a country like Canada that has mostly been playing at the pond hockey level of climate ambition, turning in one of the worst emission reduction performances among major nations over the last decade, this is like suddenly being called up to play in the NHL.  Though a sudden change, it’s an opportunity to show that Canada is finally ready to play in the big leagues of climate action, something that is eminently achievable according to a widely circulated report last week from the Canadian Institute for Climate Choices.

Right out of the gate, the Biden administration has made it clear that the U.S. will not only be rejoining the Paris Climate Accord, but “will exercise its leadership to promote a significant increase in global ambition.” The first step toward doing this will be hosting a Leaders’ Climate Summit this spring where the U.S. will be laying out its new attitude to action on climate change. This would be a good moment for Canada to also do something new and meaningful to underline its own commitment. The federal Parliament adopting an improved version of the recently introduced Climate Accountability Act would be a useful place to start.

Our American friends will, if the Biden administration gets its way, have a zero-carbon electricity system by 2035. This is an area where matching ambition should be a slam dunk for Canada. We already have a significantly lower carbon electricity system, thanks to vast hydro power infrastructure in places like B.C., Manitoba and Quebec, and are well on the way to ending coal burning in Alberta. A little inter-provincial cooperation on trading clean hydro power while also using water-power systems to backstop fast growing solar and wind, could allow us to easily outpace the Americans on reaching this target.

Biden has also called for a doubling of offshore wind power production by 2030. For Canada, doubling offshore wind would consist of installing exactly one offshore wind turbine. Despite having one of the world’s longest coastlines, Canada has completely missed the fast-rising tide toward deploying offshore wind. For example, while Canada lets the wind blow freely by on all three coasts (and the Great Lakes), Denmark is building an entire island to harness the wind.

But where Canada is really going to struggle to keep up with the newly ambitious Americans is not just with the deployment of renewable energy sources or new laws to make everything from appliances and lighting to buildings and vehicles more energy efficiency, it is with our neighbour’s new overarching approach to embedding climate considerations in every decision taken by government.

Here the Biden administration’s plan really is pace-setting, with the creation of a special climate envoy, the highly respected John Kerry, as the head of a new White House Office of Domestic Climate Policy to oversee a “whole of government” mandate for action on climate.  This is being operationalized through the National Climate Task Force, which brings together leaders from 21 federal agencies and departments to act on the president’s already extensive climate directives.

One of the first marching orders for this new climate strike force is to eliminate fossil fuel subsidies, something that Canada has been talking about for years while making little or no progress (in a recent scorecard, Canada ranked last among 11 OECD countries on progress in ending support for fossil fuels). The president’s climate directive calls for all federal agencies to “take steps to ensure that . . . Federal funding is not directly subsidizing fossil fuels” and to “eliminate fossil fuel subsidies from the budget request for Fiscal Year 2022 and thereafter.”

In the same vein, the president is calling for the U.S. to step up support for climate action in developing countries and to step down support for fossil fuel infrastructure and development outside the U.S.

Biden has a reputation as a details guy and it shows with another pillar in this government-wide approach. His directive contains an entire section on how government departments and agencies must start calculating the social costs of carbon, nitrous oxide and methane. As the directive explains, “It is essential that agencies capture the full costs of greenhouse gas emissions as accurately as possible, including by taking global damages into account. Doing so facilitates sound decision-making, recognizes the breadth of climate impacts, and supports the international leadership of the United States on climate issues.”  This is the kind of fundamental change in approach that is too often missing in political commitments to “do better.”

In the same vein, the Biden administration is pointing to the importance of simultaneously addressing issues of climate and environmental justice. Its Justice40 Initiative sets a goal of delivering 40 per cent of the overall benefits of federal investments in things like renewable energy, energy efficiency and climate adaptation to disadvantaged communities. The administration will track performance toward that goal through an Environmental Justice Scorecard.  Canada, meanwhile, is still struggling to deliver clean drinking water to many Indigenous communities and is likely to miss its current target for lifting all water advisories.

Whether it is “pausing” oil and gas leasing on federal lands and offshore areas or embracing climate action as a job creation and social justice opportunity, the Biden administration is not just talking—it is acting.  Canada is going to need to significantly improve its climate game if it wants to keep up.