What Canada needs now is another Tommy Douglas

Tom Parkin: If the NDP wins the Ontario election its plan to extend social programs could kick off a much needed new era in co-operative federalism 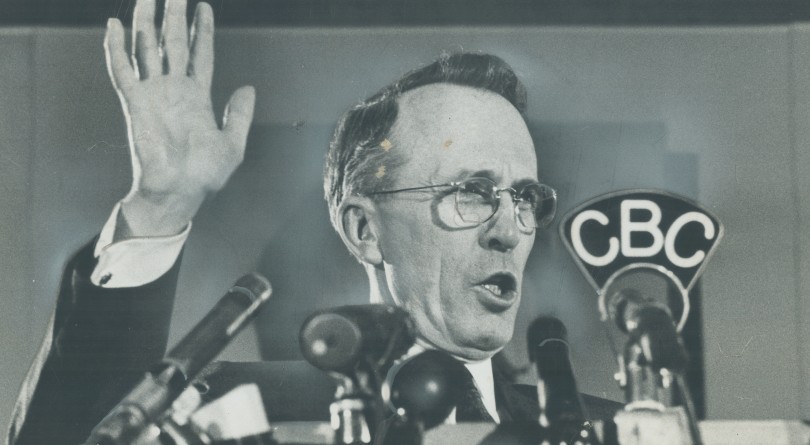 Though he was only a premier of a province, in 20 years Saskatchewan’s Tommy Douglas brought a revolution in social policy to everyone in Canada: universal health care.

Since Douglas’s time, Canadian health care has been defended from periodic rounds of cuts. But only the rare politician has picked up the threads of Douglas’s legacy in an attempt to extend health care. One of those rare times may be coming.

If she is elected premier next month, Ontario NDP Leader Andrea Horwath vows to end the cuts causing the current bout of hallway medicine. But she’s also pledged to build on Douglas’s medicare legacy by adding pharmacare and dental care. And those plans—and her child care pledge—could set in motion a new era in co-operative federalism that takes those plans across Canada.

Over the past several elections the Ontario NDP has been on an extended soul-searching tour. But for what may be her last shot at premier, it seems Horwath’s NDP has decided to dig down and be the social democratic force it was created to be. She’s crafted a detailed platform setting out an ambitious and unapologetic program. And it’s getting positive reviews—even conservative commentators who disagree with the content applaud its I-am-what-I-am honesty.

A change election is coming. The governing Liberals leave a 15-year record of ignoring or causing Ontario’s biggest problems. For many, they just lack the moral authority to lead.

READ MORE: A double-double of cynicism in Ontario

Now, with 80 per cent of voters repeatedly telling pollsters they want change, between Horwath and Ford there couldn’t be a more stark contrast. If Horwath is the new Tommy Douglas, PC Leader Doug Ford is the exact opposite.

Horwath sees social programs as critical to our prosperity. Ford views them as costs to be cut. Horwath promises to add new drug and dental plans, paying for it with higher taxes on incomes over $220,000. If she can pull out a win, that’ll build on Douglas’s legacy. Ford offers more corporate tax cuts and a continuation of Wynne’s privatization schemes. His election would result in billions and billion in cuts—eroding what Douglas built.

When Douglas won in 1944, his CCF government was completely different, something never seen before. And it led to the most ambitious Canada-building era in our history.

Douglas wasted no time in pressing for public hospital coverage for all. But a 1946 First Ministers meeting that discussed Douglas’s hospitalization plan failed to reach agreement. So Douglas went it alone. In 1947, his Saskatchewan government launched universal hospitalization coverage. It was massively popular and during the 1950s, other provinces followed his lead, establishing their own hospital coverage.

In 1961 the Saskatchewan CCF government—now in its fifth term of office—took the next step, extending medicare to doctor visits. And again, soon there was a co-operative federal partner. In 1966, the Pearson government began to co-fund provincial physician care plans.

Within 20 years, most amazingly, a Saskatchewan premier with willing federal partners had brought all Canadians our most important, beneficial and unifying social program. It’s become an icon of Canadian identity.

Key to Saskatchewan’s national leadership was the economics of Douglas’s medicare.

The CCF vision was to use government to accomplish together what couldn’t be done individually. Douglas’s universal single-payer model covered everyone and was more efficient than a hodge-podge of private plans and government assistance.

Horwath’s pharmacare and dental insurance take the same economic logic. A universal, single-buyer pharmacare system in Ontario would drive down the costs of prescriptions. For other provinces, partnering with an Ontario pharmacare plan—or taking it national—would offer big benefits.

A report from Steve Morgan, a University of British Columbia professor of public health, estimates a national pharmacare plan would require about $5.9 billion in new public revenue, but save $10.4 billion for individuals and businesses. Similar costs saving have been confirmed by numerous reports.

But most importantly, it would ensure every person gets the medications they are prescribed.

Horwath’s plan for free childcare for families with an income under $40,000 (and an average $12 fee for other parents) offers the same opportunity to make federalism work. Quebec’s affordable childcare plan has allowed more parents to continue to work—and the economic growth and additional tax revenues more than pay for the program, according to analysis by Pierre Fortin, an economics professor at UQAM.

And that added revenue doesn’t just flow to the provincial coffers—it also bolsters the federal treasury. With B.C. and Alberta now starting affordable childcare plans, and Ontario jumping in should Horwath win, affordable childcare programs from Canada’s four largest provinces would significantly benefit Ottawa. That could set the table for federal co-operation that brings the remaining six provinces into a national childcare plan.

But it’s more than that. Now, with provinces bickering and the Trudeau Liberals off course, a Ford win would bring even more confrontation and division to federal-provincial politics. But initiatives by a Premier Horwath could revive co-operative federalism and get Ottawa back on track. Her ideas offer the hope of a more co-operative federation and a stronger Canadian identity. Douglas’s efforts sure did.

MORE ABOUT The 2018 ONTARIO ELECTION: