Opinion: Did Canada burn down the White House in the War of 1812? No, not exactly—but Tabatha Southey finds out what else the President knows about history 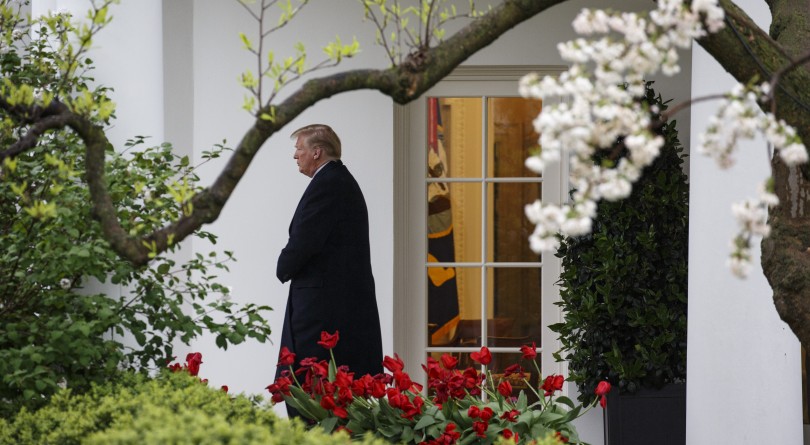 “Didn’t you guys burn down the White House?” U.S. President Donald Trump asked Prime Minister Justin Trudeau during a telephone call on May 25. The Prime Minister had purportedly asked what exactly qualified Canada as a threat to American national security—this being, we are to understand, the reason America has decided to impose tariffs on Canadian aluminum and steel.

Late on June 7, it was announced Trump will make only a very brief appearance at the Group of Seven summit in Charlevoix, Que. Trump’s advisers had said that the President was not much interested in attending at all, reportedly because German Chancellor Angela Merkel bugs him and British Prime Minister Theresa May—yes, that Theresa May—is “too politically correct.”

One fears we’re looking at the first major threat to international economic cooperation brought about by a G7 leader being told he can’t tell his “an eclectic mix of religious leaders walk into a bar staffed by a blonde” joke.

Not only does Trump seem to believe that his role as President is to eliminate one ally at a time until he can announce a winner at the end of his term, he seems to be building toward a season finale in which North Korea shows up to collect its all-expenses-paid American abandonment of the Korean Peninsula.

The second season will be a bomb.

The “Didn’t you guys burn down the White House?” question was quite a scoop for CNN. Finally, some evidence that the President of the United States is aware of historical events not entirely invented to market his golf course and defended, when challenged by the expert opinion of historians, with a “How would they know that? Were they there?”

Thanks to Trump’s remarkable ability to inspire everyone who comes into contact with him to run leaking to the press in alarm, I got an inside view of the President’s newfound interest in history. Late this week, I received audio of a phone call between a university professor who does not want his name to be used in print and a President of the United States who only wants his name to be used in print, which I have dutifully transcribed.

READ MORE: Five things you didn’t know about the War of 1812

“I have the President of the United States on the line for you,” a weary voice says.
“Again?” a still-wearier voice responds. “Look, I have marking to do…”

“Hey! Harvard History Professor!” the President bursts onto the line.

“Actually, I teach at the University of Co—”

“Some people, not the best people, not very smart people, are saying that Canada wasn’t a country during the War of 1812, what are they talking about?” asks the President.

“Well, yes, Mr. President, Canada wasn’t even united into a single British dominion until 1867 and only became functionally independent following the Statute of Westminster in 1931. Of course, it wasn’t until 1982 that—”

“Ok, so, is that a conflict of interest?” says the President excitedly.

“No, Mr. President, I don’t think having been a British colony is a conflict of—”

“You sure? I have this great line, some of my best words, I was going to call these guys the ‘Group of Six Very Angry And Conflicted Trading Partners.’ ”

“I would not say that, Mr. President, I would def—”

“Well, I wasn’t going to say that their faces,” the President assures him. “I was going to tweet that someone should tell them I said it, like I am not even talking to them!“

“Your bravery inspires us all, Mr. President, but who exactly are you hoping will tell them that? Like, the Dutch? A mutual Facebook friend? Are you trying to cyberbully the rest of the G7? I’m trying to figure out your endg—”

“Wait, if Canada voted for Crooked Hillary, is that a conflict of interest?” the ever-hopeful President asks.

“Mr. President, the nation of Canada doesn’t vote in other countries’ elections, certainly not in U.S. elections. Canada is a country and we’ve been over this—political entities don’t have hands.”

“Could they vote with their feet?” the President demands.

“Countries do not have feet either, Mr. President, they exist only in law and—”

“Ok, so no feet, no feet, that’s good. Canada can’t kick me in the shins. That’s why we’re going to win: when the other guy has no feet, you can’t lose a trade war.”

“That’s a very positive attitude, Mr. President, but if you consider how the Smoot-Hawley Tariff Act prolonged the Great Depression and how France and Germany were equally limbless—” the professor gamely tries to get in.

READ MORE: What we can learn from a disastrous 1930 U.S. tariff on Canadian goods

“So, I’ve been having Ivanka read to me about this War of 1812, and I’m worried, because Obama was so bad to our military, just so weak on war. Can our great soldiers still fight a war? I mean, not just against loser terrorists, but against a real army? I mean, when everyone lines up and plays the drums and then shoots their guns when the guy in the very nice hat yells at them—can our guys still do that?”

“Mr. President, wars haven’t been fought like that in over a century—”

“Look, I have a very good brain, my uncle was a great professor and scientist. I own a lot of hotels, a lot of people are saying they’re the best hotels. They’re the best hotels because I cover everything in gold. They cover all their military in fancy red coats. It’s very sad, no president before me has been able to get our very fine military and veterans fancy red coats. It’s because the aircraft carriers don’t have steam anymore—you can’t clean a coat with a magnetic catapult, it’s no good! I’m going to bring back the nice coats and make our aircraft carriers steam cleaners again.”

“I don’t even know how to respond to that, Mr. Presi—”

“Are you sure you’re a history professor?” Trump asks.

“Well, as I keep telling you,  Mr. President, my Ph.D. is actually in music theory, but I’m not currently under federal investigation, never even finished reading War and Peace, so I’d say I’m at least as qualified to advise you as anyone else you bring—”

“That’s good, that’s good. I pick the best people. I’ll call you again before I talk with Little Rocket Man. But before I go—if 13 angry beavers and other woodland creatures chewed on the White House, could they make the roof fall on me?”

“I have to go Make Dinner Great Again, Mr. President, but, uh, don’t worry so much about the beavers. They build dams, which are like are like walls, but for rivers. Beavers are very tough on the border and lumber, you’ll get along great.”