What is Justin Trudeau going to do with his global goodwill?

Justin Trudeau has amassed plenty of international political capital, says Andrew MacDougall—but it's unclear what he'll spend it on 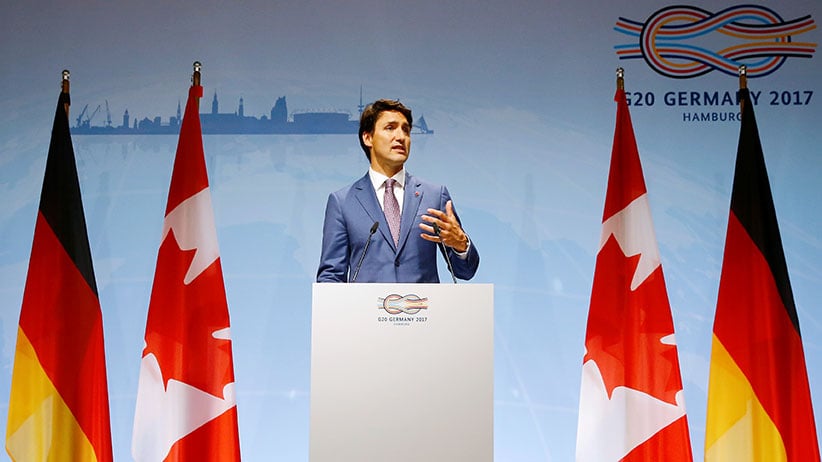 What are the “deliverables”?

This was always the question we in Stephen Harper’s PMO had to answer before scheduling an international visit for him.

“Deliverable” is Ottawa-speak for an announcement: a trade deal or at least the start of negotiations; a new intelligence-sharing arrangement; a new consulate in an up-and-coming country; or, if you were absolutely stuck, a youth exchange program. Something meant to benefit the country.

Just being the prime minister in a strange land wasn’t enough to drive good press—at least not for Harper.

Justin Trudeau doesn’t appear to have that problem. His trips last week to Ireland and Scotland generated reams of good press. And at the G20 summit in Hamburg, Germany, the other world leaders were complimentary—even Donald Trump claimed Trudeau is “doing a spectacular job.”

For the record, it’s a good thing that a Canadian leader produces this effect on the world. A little political stardust can go a long way. But it’s time to ask: What are Justin Trudeau’s “deliverables” on the global stage going to be?

After all, his Ireland and Scotland trips lacked even the hint of a glimpse of a suggestion of a notion of a deliverable, given the end of visit press release issued by his office.

“The two leaders discussed the strong people-to-people relations between Canada and Ireland,” it read—the Global Affairs equivalent of “how’s everybody enjoying their holiday?” The same can be said about jetting into Edinburgh to pick up an honorary degree.

Not that you’d know it from the tone of the media coverage, which was even-keeled and free of “where’s Trudeau” snark (despite a mere two press conferences over six days), an impressive accomplishment when the first day of the visit was upset by the first reports of the Omar Khadr settlement. The host country’s press coverage, meanwhile, was gooey warm (e.g. “he jogged with our Taoiseach,” “he made the Queen laugh!”).

Call it the “Trudeau effect”: it makes foreigners gush and puts Canadian media on their best behaviour.

Trudeau rarely misses an opportunity to speak about “Canada’s values,” as he did while introducing Coldplay at the Global Citizen concert in Hamburg, before the summit. “The fight for fairness and equality starts with empowering women and girls,” Trudeau enthused.

Damn right. But it actually starts with ensuring more women and girls make it to empowerment age. That’s one of the reasons Stephen Harper used Canada’s G8 presidency in 2010 to drum up billions of dollars for maternal, newborn, and child health (in the midst of the biggest global recession in generations, no less.) It’s why Rona Ambrose pushed the United Nations to create the “International Day of The Girl.” And while it’s true that Trudeau has announced a reorientation of his foreign-aid plan to target women and girls, there is no new money—and aid groups are still waiting to see what the new approach means in practice.

Right now Trudeau’s main foreign-policy goal appears to be generating political capital for the Trudeau brand, and little else. Everywhere he goes, our prime minister is slotted into gimme events meant to bolster him as the paragon of tolerance, the preacher of diversity, and the frontman of feminism. Trudeau has told people what he’s going to say, has said it, and is now saying it again to anyone who will listen. It’s time to act.

Trudeau certainly didn’t put his star power in service of the G-20 meeting in Hamburg. Despite the kind words and the good headlines, if you try to find Trudeau’s imprint in the summit outcomes, you’ll come up empty.

If the climate is such a big deal—and it is—why tap-dance around Donald Trump’s retrograde views instead of putting a shoulder to Angela Merkel and Emmanuel Macron’s wheel and getting the U.S. on board with the G-20 summit communiqué?

If Canada is the big free-trading nation, why not can the export of colourful sock stories and instead get clear language endorsing free trade’s value to the world economy?

Why not, for that matter, press Vladimir Putin over his treatment of Alexei Navalny, other Russian democrats, and the journalists that are killed for covering them?

One suspects it’s because these efforts would have come up as empty as that Scotland and Ireland press release. It would have demonstrated that political celebrity is every bit as empty as its Hollywood equivalent—a soft bonbon in a world of hard power.

If, as Team Trudeau tells us, the world is looking to Canada as an example, at this point that’s all they’re doing: looking at the great photos Trudeau and his retinue produce.

Wouldn’t it be nice to give the world a little more?

Next year, Canada once again assumes the presidency of the G7. What will Trudeau choose to push on the global stage? We are left to guess at which words will be backed up by muscle.

Trudeau, to his credit, is able to earn goodwill effortlessly. But now it’s time to, you know, actually do something with it. Political capital isn’t amassed to be banked, after all—it’s meant to be spent.