What it would really take to close the gender wage gap

Peter Shawn Taylor: A look at Nordic countries reveals the big obstacle to eliminating gender pay gaps is the preferences of female workers themselves 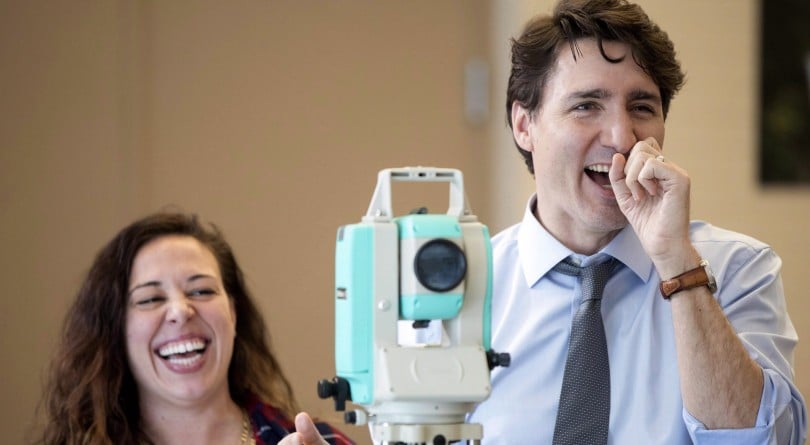 Prime Minister Justin Trudeau shares a joke with a student during a visit to Georgian College in Barrie, Ont., on Friday, March 2, 2018. Trudeau spoke to students on the subject of Budget 2018's Pay Equity policy. (THE CANADIAN PRESS/Chris Young)

Gaps are meant to be filled, as most dentists, teachers and drywallers will tell you.

And the Trudeau government has made closing gender gaps its major preoccupation.

The size of the gender wage gap was given central place in this year’s budget. “On average, women earn just 69 cents for every dollar earned by men on an annual basis,” Finance Minister Bill Morneau scolded in his budget speech. “That’s not right.”

To remedy this outrage, the Liberals have introduced numerous gap-closing policies, including special financial aid packages for women entrepreneurs, efforts to encourage greater female participation in science, technology, engineering and math at university and preferential hiring practices for co-operative education. The 2018 budget even allocated $30 million over three years to remedy gender coaching gaps behind the benches of minor league baseball and hockey teams. And new branch of Statistics Canada has been created to spot and measure gender gaps in all manner of economic and social realms.

If there’s a gap out there, rest assured Prime Minister Justin Trudeau—who’s cabinet is in perfect gender equilibrium, remember—is looking to close it.

This fixation with equality seems an admirable goal. (Recall that in February, Maclean’s asked men to pay 26 per cent more than women for its magazine to highlight Canada’s “shocking” wage gap.) But will these campaigns inevitably lead us to an enlightened state of social perfection? Or might they prove entirely Sisyphean, doomed to leave everyone worse off? For a look at the long-term implications of this quest for a gap-less society, we turn our eyes North.

Norway, Sweden, Finland, Denmark and Iceland—collectively the Nordic countries—share many similarities with Canada in terms of climate, geography and political outlook. On the issue of gender equity, however, they offer a vision of the future. Closing gender gaps has been an obsession in these countries for decades.

“Over the past 50 years, the Nordic countries have been the leaders in the development of modern family and gender equality policy,” says a recent OECD report on the topic.

Among the various Scandinavian innovations meant to promote gender equality are universal child care, tough employment laws on pay equity and the protection of mothers’ right to work plus generous paid parental leave, including a component designated solely for fathers—a feature recently adopted by the Trudeau government.

It’s hardly news, of course, that Sweden and its neighbours are at the forefront of gender equity efforts. What is new, however, is evidence on the result of these decades-long efforts, and what it will take to finally achieve full economic parity between the sexes.

The OECD report “Is the Last Mile the Longest? Economic Gains from Gender Equality in Nordic Countries,” released earlier this year, looks at the region’s many achievements in incorporating women into the work force, and at the positive impact this has had on the five countries’ GDP. But it also reveals the surprising persistence of significant gender earnings gaps, despite all the efforts at eradication. And the biggest obstacle to perfectly equality of the sexes appears to be the self-interest of Nordic women themselves. Based on their own actions and revealed preferences, it seems they simply aren’t interested in living in an entirely gapless society.

To begin, the Nordic countries have been extremely successful in encouraging women to enter the work force. The difference between male and female participation rates is quite small across the region, ranging from three per cent (Finland) to 6.3 per cent (Denmark). In Canada the gender difference is substantially larger at 7.6 per cent. The region has also achieved similar success in employment rates.

But in terms of earnings—where most of the heat is generated when discussion turns to gender gaps—there remains a stubborn and significant male/female split. The gap between median earnings for full-time employees ranges from a low of 5.8 per cent in Denmark to 18.1 per cent in Finland—nearly identical to the 18.2 per cent figure ascribed to Canada.

(Note that Morneau’s claim Canadian women earn a mere 69¢ for every dollar earned by men—a gap of 44 per cent—is a “problematic” comparison, according to Statistics Canada, since it mixes part-time and full-time work. It’s fairer and more meaningful to compare full-time earnings by gender, as the OECD does above.)

And according to the OECD ‘s analysis, it will be nearly impossible to eliminate these lingering Nordic gender earning gaps. With female labour participation rates already very high and with pay equity laws already ensuring men and women are paid equally for the same work, the only way to close the remaining earnings gap is if Nordic women agree to work substantially longer hours.

To do so would require large numbers of Scandinavian women currently working part-time to switch to full-time jobs. But the vast majority of Nordic women working part-time do not seem interested in such a bargain. In Sweden, for example, 80 per cent of female part-time workers are doing so voluntarily. In other words, the gender pay gap in Nordic countries is largely a result of the freely-made choices of Nordic women, who prefer to work less than men for a variety of reasons.

Given this female hesitancy to work more hours, the only realistic way to close the gender gap in the short term is to convince men to work fewer hours. “Whether or not it is feasible, or even desirable, to fully close gender gaps in this manner is a matter for debate,” the OECD admits drily.

The OECD report further reveals that women overwhelmingly prefer unionized, public sector jobs. Among the many reasons for this preference are shorter hours, better skills match and the welcome possibility of “comparatively high wages for low-skilled jobs.” This perfectly rational choice, however, means women tend to be underrepresented in the private sector, where it is possible to earn higher wages, but at the cost of longer hours and greater stress. This gender-based preference for public sector work over the private sector contributes greatly to the pay gap. But is it something that requires government intervention?

Another obstacle to eliminating the gender earnings gap is the fact that, when given the choice, many Nordic mothers prefer to stay home with their children rather than send them off to institutional child care in order to re-enter the workforce.

In Finland, for example, new mothers can choose to receive “cash-for-care” payments in lieu of a spot in official daycare until their child is three years old. The surprising popularity of this program, despite the fact these cash payments are substantially less than the per-child subsidy allocated to regulated child care spots, suggests that eliminating gender pay gaps is less important to many mothers than spending time with their young offspring.

“The Finnish home care allowance … helps to explain why Finnish mothers with very young children are less likely to be found in paid work than mothers in other Nordic countries,” the OECD reports.

Finally, for a study supposedly focused on eliminating gaps that disadvantage female workers, the OECD investigation inadvertently reveals that many of the most meaningful gender gaps in Scandinavian countries are those putting males at the disadvantage. It notes, for example, the worrisome “underperformance of boys in school” when compared to Nordic girls, as well as the fact women from the entire Scandinavian region are substantially more likely to earn a university degree than their male counterparts.

These same situations, by the way, exist for Canadian boys and portend grim tidings for the future of all male workers. If left unaddressed—and there appears to be no political will to even discuss male gender gaps—this suggests true equality between the sexes may eventually be achievable, but in a way that leaves all of society worse off: by reducing the economic outcomes for men rather than improving the outcomes of women.

A long history of gap-focused, female-friendly social policy currently ensures Nordic women have the opportunity to work as much as they like, with no institutional barriers blocking their progress. But after 50 years, opportunity alone has not been enough to eliminate the gender earnings gap. Why? Because the biggest obstacle to closing persistent pay gaps is the fact women make their own decisions about how much to work, their preferred jobs and the amount of time they spend with their young children. And should we really consider gaps that arise in these ways to be problems in need of fixing?