What it's like to return to 'normal': Awkwardness, uncertainty and moments of overwhelming joy

Adnan R. Khan lives in Cambridge, Mass. where more than half of adults are fully vaccinated. He describes the city's reopening, which was not exactly the celebratory fanfare some might have expected. 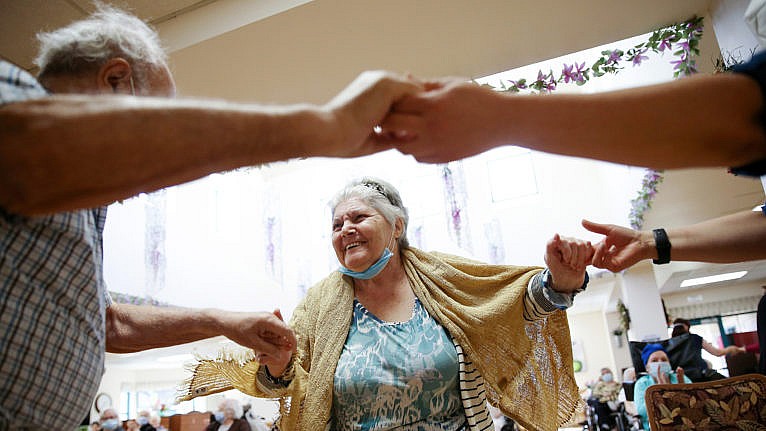 Residents and staff dance during an Easter concert for vaccinated residents at the Ararat Nursing Facility in Los Angeles, CA (Mario Tama/Getty Images)

Among the forbidden acts revisited since the coro­na­virus made physical contact a sin, the most sublime for me, so far, has been an accidental handshake. There is a special quality to the once-mundane gestures that have, in the span of little more than a year, become profane—a handshake, a hug, a pat on a kid’s head. These small acts have disappeared and, in their absence, become something larger than life.

My transgression happened in late May, at a backyard dinner party in Cambridge, Mass., with a group of fully vaccinated Harvard post-doctoral fellows and their partners. It was accidental because it happened reflexively: my wife and I were leaving and as I passed by one of the guests, whom I’d never met, we both reached out, and we clasped.

A collective gasp ricocheted around the table. “Are we shaking hands now?” someone asked. Another guest stood up. “We’re all vaccinated,” he declared, and hugged my wife. It was a triumphal moment, as if a suffocating barrier had been smashed open. Only two weeks earlier, Cambridge had been under a mask mandate that required people to wear face coverings outdoors. When friends gathered, they still did so in the way we’ve all become accustomed to—outdoors and at a distance, like strangers exchanging pleasantries.

READ: Inside the global race against COVID-19 mutations

The return to some form of normal has been equally furtive and uneven. That hug was not followed by a barrage of embraces. People are still wary, understandably so after the traumas of the past year. Cambridge, with a population density about equal to downtown Toronto, is an interesting case study in what a post-COVID normal could look like. By the end of May, it had among the highest vaccination rates in the U.S., with more than half of adults fully vaccinated and nearly 70 per cent having received at least one shot. Its daily rate of infection had dipped to around two per 100,000.

Still, people were wearing masks outdoors, despite the city lifting its outdoor mask mandate. Bars and restaurants remained only lightly trafficked, even though capacity limits were also being rolled back. Reopening was not the celebratory fanfare some might have expected; it was toe-dipping, and baby steps.

On May 21, Cambridge officials announced that all COVID-related restrictions would be lifted on May 29 and its state of emergency would end on June 15, when Ontario is expected to begin its reopening. If the city follows the same trends as other places in the U.S., returning to life as we’ve known it will be fitful and uncertain. For many of us, the normal social cues that have guided our public lives will be rusted and creaky: Do we shake hands? Fist or elbow bump? Are we standing too close or speaking too loudly, projecting a fine spray at our interlocutors? Can we lean in for a whisper? If we raise our hand for a high-five, will it be left there hanging, untouched?

There will be awkward moments, but there will also be moments of overwhelming joy. For the fully vaccinated, speaking from my own experience, the burden that has been lifted is indescribable. Vaccines are proving to be even more successful than initially thought. There is evidence now that vaccinated people do not spread the virus easily. Most of those who are unlucky enough to be hit with a breakthrough infection are likely to experience mild symptoms and shed too little virus to infect others. So being vaccinated not only means you protect yourself, but also those around you, even the unvaccinated.

But relief from the pandemic will also come with costs. Traffic congestion in Cambridge and the greater Boston area has been horrendous during the reopening as people shy away from public transport. Urban flight is also accelerating, which will ultimately add to the traffic woes. And with financial and social support mechanisms coming to an end, people will start to feel the economic impacts the pandemic has wrought. In Massachusetts, the end of the state of emergency will mean the end of the state’s eviction moratorium. Housing activists fear thousands could be forced out of their homes.

READ: The COVID cocoon: Meet the people who transformed themselves during lockdown

And lest we forget: the pandemic is far from over. Fortunately in Cambridge, a highly educated city where trust in expertise is nearly universal, people have been careful not to equate reopening with total victory. Even if 70 per cent of the population is fully vaccinated, the city will not have achieved herd immunity, making occasional flare-ups likely unless some care is taken.

“I don’t think I’ll full-on jump back in at this point,” Micah Lott, my neighbour and a professor of philosophy at Boston College, told me recently. “I am going to be watching those vaccination numbers and adjusting my behaviour accordingly.”

Nonetheless, the prospects of a summer bearing some of the hallmarks of its pre-pandemic iterations seem tantalizingly real. A few days after the dinner party, my wife and I bumped into Lott and his wife on our street as they were headed out for a walk. We had become friends during the pandemic and, for the past year, our interactions had consisted of masked and socially distanced chats on the street and the occasional drink outside on their patio. This time, knowing everyone had been vaccinated, we hugged for the first time. It felt transgressive, but it also felt liberating. But most of all, it just felt really good.

This article appears in print in the July 2021 issue of Maclean’s magazine with the headline, “Can we shake on it?” Subscribe to the monthly print magazine here.