Opinion: The Ontario PCs' former leader is running for the top job again—and it reveals what's wrong with how parties choose leaders 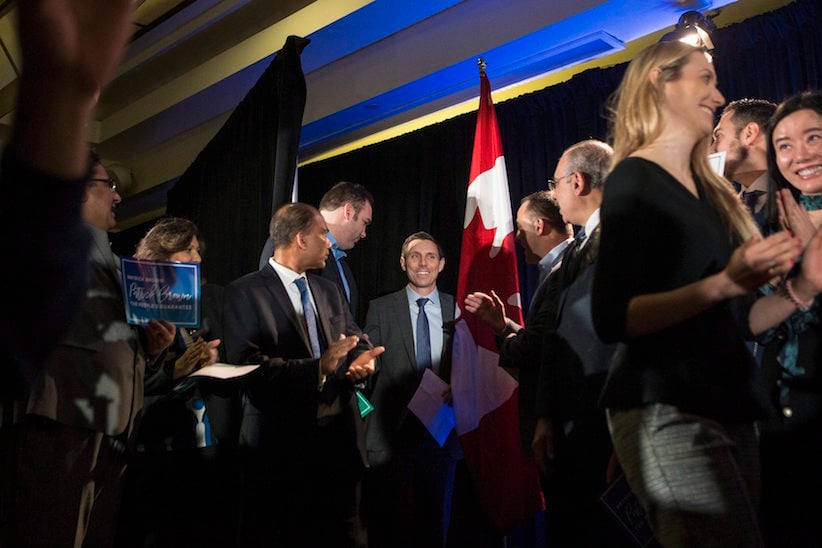 Ontario Conservative leadership candidate Patrick Brown is greeted by supporters as he takes to the stage to address supporters and the media in Toronto on Sunday, February 18, 2018. (Chris Young/CP)

Dale Smith is a freelance journalist in the Parliamentary Press Gallery and author of The Unbroken Machine: Canada’s Democracy in Action.

The saga of former Ontario Progressive Conservative leader Patrick Brown’s selection, resignation, and last-minute second attempt at the party’s leadership is nothing short of an omnishambles. He’s been ejected from caucus, but with—as Brown says—the support of Ontarians he’s heard from, despite the sexual misconduct allegations that lost him the confidence of his party, he is jumping into the race to replace himself.

The problem here isn’t just in the specifics of Brown’s unique situation, though. The drama around the Ontario PC leadership race is merely another culmination of how completely broken our system of choosing party leaders has become in Canada—and even worse, it’s a political poison that we have been exporting for years.

It used to be that Canada followed the Westminster parliamentary tradition—where members of a caucus would choose a leader from their ranks, both before and after Confederation. But in 1919, the federal Liberal Party decided to shake things up following the death of Sir Wilfrid Laurier, opening up the leadership process to party members in a delegated convention. This was hailed as a breath of fresh air, and it brought William Lyon Mackenzie King, a former MP who did not have a seat at the time, back into the fold. The press hailed this as bringing a greater sense of democracy to the party, and within a decade, the Conservative Party followed suit.

Just one problem: This selection style obliterated any sense of accountability that the leader had to their caucus, and ignores the core value of our representative democracy. Indeed, when Mackenzie King found himself in a scandal and his caucus was threatening to revolt, he informed them that they did not select him, and thus could not remove him. And from that moment forward, our leaders have become less and less accountable to the elected caucus that they lead. Delegated conventions gave way to one-member-one-vote systems, which have since given way to opening contests up beyond party members into “supporters”—a cynical move that the federal Liberals adopted in 2013 as a means of populating their voter information database, but which created such a broad and nebulous voter pool that elected Trudeau so that he could claim a broader “democratic mandate” than any leader had previously. And if you ask MPs who serve in his caucus, they’ll tell you that he absolutely knows that he’s not accountable to them.

But he’s also not really accountable to the membership that elected him either—they’re a loose collection of mostly one-time voters who don’t follow his movements closely, and if a leadership review were to be held, he would have the ability to mobilize them to his defence if he really wanted to. (It bears noting that former NDP leader Thomas Mulcair lost his membership review vote because he didn’t mobilize members in his defence, and didn’t even offer a speech to convince members to give him another chance, preferring to rerun his election stump speech instead). These “rented” members also don’t see what happens behind the caucus room door, where a toxic leader’s actions may be most apparent to those dealing directly with him or her.

Allowing leadership contests to run in a manner that brings in outsiders to the caucus has morphed into a kind of quasi-presidential primary system in Canada, which increasingly favours leaders who will pander to populist tendencies to the detriment of the party itself. In some cases, it’s attracting thuggish would-be leaders, who may not always win, but who start shifting the orientation of the party to meet the base that they stir up, whether it’s a Doug Ford or a Kellie Leitch. Even those charismatic leaders who attract all kinds of new followers for the party are doing so at the expense of the core dynamics of how parties are supposed to operate in our system.

Making leaders accountable to their caucuses is important because otherwise, the reason for parties to exist—which is to act as interlocutors between grassroots members and the caucus in the legislature, in favour of centralizing power for those leaders and their operatives—becomes weakened. We watched that happen in Alberta, where that province’s Progressive Conservative party became so amorphous that it only stood for power. The leadership candidate who could bring in the biggest number of outsiders who would have nothing to do with the party otherwise but wanted to simply have a say in who the next premier would be—given that the province was operating as a one-party state over the last couple decades—would win and shape the party around themselves. There was no longer a party: there was a premier, and his or her cult of personality. That history is certainly repeating itself in Ontario; the PCs’ “People’s Guarantee” platform, after all, was built around Brown’s image.

When Brown ran for the leadership the first time, he had an extensive network on the ground that was able to sign up thousands of members and out-organize Christine Elliott, who had caucus support but a weaker ground game. But because our political parties have become so weakened that they’ve been reduced to mere vehicles for the leaders, they’ve also become almost completely unable to put up any resistance against bad leaders, particularly once those leaders install their friends into the party executive (as Brown did with Rick Dykstra, and Justin Trudeau did with Anna Gainey). Witness the “rot” in the party that was uncovered after Brown’s departure: tens of thousands of memberships that were likely fraudulent, nomination contests that had been gamed—including credible allegations of ballot-stuffing—that saw Brown’s friends win those spots on the ballot despite the feelings of the grassroots members in those ridings, and even payments for his condo coming out of party coffers. This happens because we have created a system where leaders, with the “democratic legitimacy” of thousands of temporary members, can act with impunity, because there is nobody who can stop them.

If caucus members object, they are bafflingly derided as “elites” who are out for themselves rather than the good of the party or the leader—and yet it’s a narrative that keeps coming up, particularly now that Brown has re-inserted himself in the leadership race, and all of the contenders are outside of caucus. The tendency by his supporters to overlook that organizational rot to rally around him demonstrates that the powers of the cult of personality have transcended what a political party should be about, and the concerns about how it is organized. It has become solely about the leader, and in this case, Brown himself, and those concerns are taken to be either fabrications by his rivals, or not worth worrying about because they should be rallying around to support him.

We’re seeing this in other parties, too. The federal Liberals have so undermined their own party structure after Trudeau became leader that they voted on a new constitution that did away with most of the regional protections that could push back against a bad leader in the name of “streamlining,” and they turned their grassroots policy process into a top-down one that relies on Big Data to justify itself. Power has been centralized in Trudeau’s leadership circle, and party members applauded. In the U.K., the adoption of Canadian-style leadership rules allowed Jeremy Corbyn to bulldoze over the Labour Party thanks to a small enough cadre of stalwart believers who could game the one-member-one-vote system sufficiently enough to go to war over his own caucus, and now those same stalwarts are trying to rewrite the party rules to rescind the nominations of incumbents who don’t support the leader.

What has happened with Brown should be a wake-up call that we’ve strayed so far in our political institutions that they no longer function as intended. We need to return to a system where caucus selects—and more importantly, can remove—leaders. And you can’t have one without the other, as others have argued, and as Michael Chong has ostensibly legislated with his Reform Act that passed into law (but no party voted to adopt). If caucus can remove a leader without selecting him or her, then it sets up a situation where the grassroots goes to war against the caucus—which reflects what we’re seeing with Brown’s ouster, and is toxic for our democratic institutions.

Leaders claim to be making parties “more democratic,” but we’re not actually getting democracy as a result. It’s time to stop this madness, restore caucus selection, and make our leaders accountable again. Anything less and we’ll continue to see our political parties devolve into warlordism, as opposed to being the vehicle by which citizens engage with the political system.