What the Democrats' 'Medicare for All' plan could spur in Canada

Opinion: For some Americans, Canadian health care is a source of envy. But the 'Medicare for All' plan shows that our system could use a shake-up, too 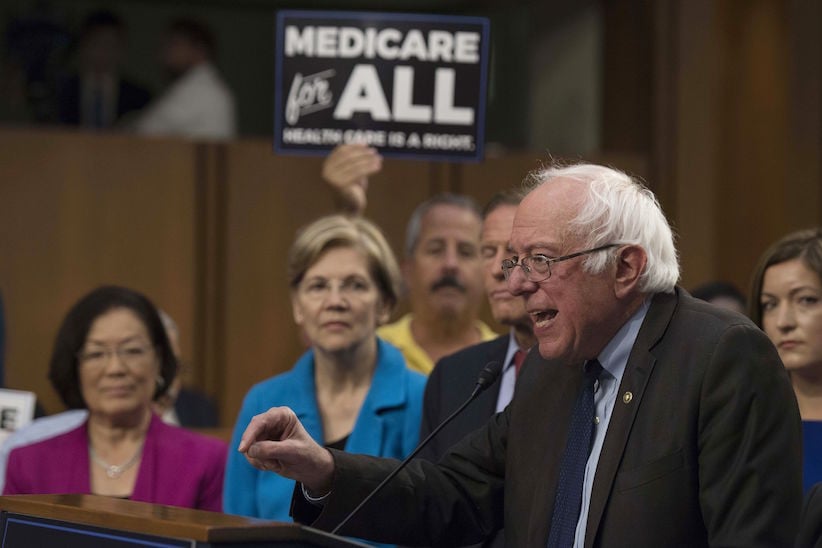 Andrew Boozary is a resident physician at the University of Toronto. Danielle Martin, who has endorsed Bernie Sanders’s Medicare for All plan in the U.S., is a family physician, the vice-president of medical affairs and health-system solutions at Women’s College Hospital in Toronto, and an expert advisor with EvidenceNetwork.ca.

Bernie Sanders made a splash last week when he introduced the Medicare for All bill in the United States Senate, flanked by 16 other Democratic senators who all pledged their support for the implementation of single-payer healthcare in the United States. Given the multiple fault lines in health policy in Washington—including within the Democratic Party—that show of support seems like a major feat on its own. But the grander task, critics say, will be figuring out how to pay for it. And despite Sanders’s financing proposals, without those details, they say, Medicare for All remains a pipe dream.

But the proposal itself would deliver a national health insurance program for the 21st century. Its coverage would extend not only to doctors and hospitals, but also to essential prescription medicines, mental health and addictions services, and dental care. It would cover every single resident of the U.S., regardless of immigration status. The bill creates the infrastructure for a renewed focus on primary care, and a more rigorous approach to quality guidelines to ensure that the best possible care is consistently available to everyone.

Amid America’s debate over this and other healthcare plans, some have pointed to Canada’s system as one worth emulating—and rightly so. Canada now spends less than half as much per capita than the U.S. on health care while covering nearly all residents for core services. The United States has historically seen a fifth of its population go without health insurance, and even for those covered, rising health care costs have chewed away at wage increases for working families. Life expectancy is longer in Canada; infant mortality rates are lower. And a woman who is pregnant or giving birth is twice as likely to die in the United States than Canada.

But Canadians should know that if the bill passes—either now or in future—it will leave the Canadian healthcare system playing catch-up. While Canadians should be proud of our universal system, it currently falls far short of what it could be. So just as we can offer hope to our neighbours that universal coverage is achievable at an affordable cost, so too can Canadians draw inspiration from the plan being pursued there to improve a system in need of a 21st-century perspective.

While Canada does well compared to the U.S. across a wide variety of metrics, we often fall short by international standards. Countries such as the United Kingdom and France have, in some respects, delivered more generous coverage with better health outcomes at lower or comparable costs. Some of this might have been achieved through better integration with social services, and a health system that can offer wider reach than just behind the walls of a hospital. Where access to core medicare services remains reasonably equitable in Canada, more than one in five households here reports someone in the family isn’t taking their medications as prescribed due to concerns about cost. And in the face of an opioid epidemic that is taking the lives of so many North Americans, coverage for addictions services is more important now than ever. We have treatments, whether it be medicines or psychotherapy, that are known to be effective, and we have kept them out of reach for those who need them the most.

For far too long, too many patients have been falling into these gaps or trying to navigate silos in the Canadian systems. A pharmacare program could bridge these gaps and ensure that patients are no longer priced out of help. It might also help address the fact that we remain close behind our neighbours when it comes to the amount we pay for drugs. But after years of political compromise, it’s become too easy to simply maintain the status quo—an act of courage is needed to shake things up.

It’s courage we’ve had before. In Canada, Tommy Douglas’s Saskatoon Agreement of 1962 was in many ways a compromise between stakeholders that allowed doctors to continue to opt out of the system and maintain their status as independent entrepreneurs rather than salaried public employees, as is the case in the British National Health Service. But the passage of the Canada Health Act in 1984 under Prime Minister Pierre Trudeau put an end to extra-billing in Canada and established the framework for equitable access to services for all.

And in America, compromise with powerful stakeholders goes back further in American history than Barack Obama’s Affordable Care Act. Even as President Lyndon B. Johnson was determined to pass a Medicare bill, decades of political obstruction led to a legislative compromise that landed short of universal health coverage. And as a result, the government was never able to “regulate” the costs of hospitals and doctors, while employers and private health insurance filled the coverage gap. But a Medicare for All plan represents at least the spark of potential change.

While some will continue to insist that “socialized medicine would be akin to slavery,” support for universal coverage in America is growing, and that may represent a window of opportunity. Here in Canada, increasing pressure for universal pharmacare may finally open up such a window as well. By seeing the toll private health insurance has levied on Americans with rising co-pays and higher prices all around, we may no longer be able to afford going down the same path.

One thing is for sure: no health care system can stay the same forever. And too much compromise, without a dose of courage, doesn’t yield much worth celebrating. As America takes its leap with a potential act of courage, Canada ought to be looking for another one of its own.