The Democratic Party's new brand might feel like empty sloganeering—but it may also signal a big shift in thinking. Which one is it? 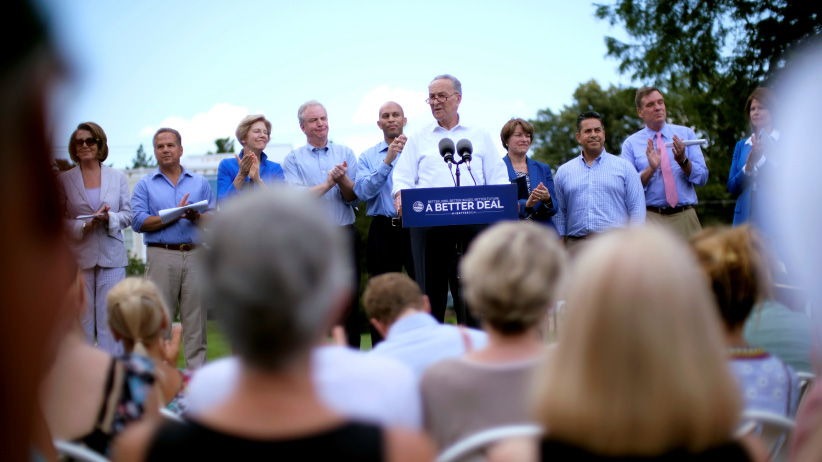 In America, when a professional political party fails on the grand stage of a presidential election, the first casualties are usually the marketers. After all, it couldn’t have been the case that the party’s policy platform, those Great Works of elite insiders, had been a bust. It must have been the way those ideas were sold to the masses.

So it was a fairly compelling moment this past Sunday when, after six months of internal circumspection, Senate Minority Leader Chuck Schumer went on ABC News’ This Week to play the role of party tribune, and he bluntly described his party as having screwed the pooch in wholesale terms: “The number one thing that we did wrong,” he said, “is … we didn’t tell people what we stood for.” Alongside that admission comes a new Democratic party message: “A Better Deal.”

It’s certainly bumper sticker-ready. What’s less certain is whether or not this is truly going to be a new undertaking, or a market-tested badge with which to sell the same old ideas. The first few days of this “Better Deal” has, not without justification, attracted a slew of jaundiced eyeballs. But there may, nevertheless, be something worthwhile stirring beneath the slogan.

It is, after all, about time for something new. Back in 2010, Democrats adapted to the rise of Tea Party conservatism with a message that could best be summed up as, “Those other guys are crazy.” In that particular election cycle, that was sufficient to preserve their Senate majority. But they’ve run that particular pony around the track in every election cycle since, each time with diminishing returns.

In 2012, this approach served President Barack Obama’s re-election ambitions in good stead. It was easy to define his opponent, Mitt Romney, as a private-equity buccaneer ill-suited to lead in post-financial crash America. But this message, already well past its sell-by date by the 2014 midterm elections, lost its salience completely in 2016, when Trump ran as a class-traitor, seizing the populist mantle while his opponent explained, on television, that her oft-derided paid speaking engagements in front of Wall Street titans were undertaken to soothe these financiers’ psyches from the ravages of the Sept. 11 attacks—a contention that shall live forever in the annals of pure preposterousness.

In fact, whether or not the Democrats truly have a “Better Deal” may hinge heavily upon how willing they truly are to grapple with the specific failings of Hillary Clinton’s message without alienating those who supported her campaign. During these past six months, the vacuum that this “Better Deal” now seeks to fill was occupied by factional infighting between liberal centrists and a newly engaged left, each trying to re-resolve the debate sparked during Clinton’s primary contest with Sen. Bernie Sanders (I-Vt.) as to who truly represents the future of American liberalism—the contours of which have been shimmeringly illuminated in these pages by John Semley.

MORE: The ghosts of past promises haunt the Republicans’ future

A cursory examination of the “Better Deal” suggests that Democrats might be feinting in the direction of Sanders, if for no other reason than the way its underlying principles all but completely embrace the idea that something has gone deeply awry in the economy. Schumer speaks of an “economic playing field” that’s been tilted “in favour of the wealthy and powerful.” His colleague in the House of Representatives, Minority Leader Nancy Pelosi, has joined the chorus, railing against “a rigged economy and a system stacked against” ordinary Americans.

All of which sounds like we’re off to a nice start. But this new campaign still inspires some fretting. The full slogan that was originally unveiled by the Democrats—“Better Skills, Better Jobs, Better Wages”—is a pleasing enough refrain. And it’s interesting that, after years of touting President Obama’s positive effect on the unemployment rate, Democrats are recognizing that Americans didn’t always return to jobs of similar quality than the ones they’d lost. Nevertheless, there’s something very empty-calorie about this bit of sloganeering—there is no party, after all, that has come out publicly for “worse jobs or worse wages.”

Furthermore, the “Better Skills” part of that message proved to be so immediately nettlesome that it was dropped in favour of a rewrite: “Better Jobs, Better Wages, Better Future.” But as the New Republic’s Bryce Covert points out, while the “Better Skills” rhetoric has been dropped from the banner, it nevertheless remains an intrinsic part of their platform, placing “much of the onus on workers themselves, not on the system that isn’t working in their favour.”

Into that gap, Covert notes, Democrats promise to lavish money on “apprenticeship programs” and tax breaks for employers to train workers, thus putting taxpayers on the hook for subsidizing what corporate firms should be doing as a natural part of their business, and potentially providing a new kitty of money for for-profit education hucksters and “bootcamp” merchants to peddle their wares, as they’ve done throughout this period of high social and economic inequality. Is it possible that Democrats have forgotten President Trump’s own foray into that particular swamp?

Despite all of this, however, there are signs that Democrats may be onto a big shift in their thinking—something upon which a future can be built. Deeply embedded within this better deal, you’ll find a powerful critique of the way monopoly power has distorted democracy, and the Democrats seem game to try to do something about it. In his New York Times’ op-ed, Schumer specifically calls for new antitrust laws to take the place of the ones that have “allow[ed] huge corporations to merge, padding the pockets of investors but sending costs skyrocketing for everything from cable bills and airline tickets to food and health care.”

MORE: The rise of the ‘dirtbag left’

This prospect—that the Democrats might return to some trust-busting roots—have given no small amount of hope to progressive observers. New America Foundation fellow Matthew Stoller, who has been outspoken about the extent to which the Democrats’ rejection of their anti-monopoly roots destroyed the party’s soul, enthused on Twitter that this represented a “really big change in thinking.” The director of New America’s Open Markets program, Barry Lynn, followed suit in a statement, saying that the Democrats’ “new focus on America’s monopoly problem is an important step forward in fixing what’s really wrong with our country,” adding, “Democrats appear to be returning to their roots, which is to fight to ensure liberty and opportunity for every American.”

If the Democrats can stick to it, they might find a way to craft policies that take them from their favoured professional enclaves into those sectors of the American heartland that failed to gin up necessary support for Hillary Clinton—from exurban households facing the high cost of EpiPens and other pharmaceuticals, to rural communities undone by corporate agricultural mergers. But the true test of their new platform will come when they’ve gotten it off the pages of the New York Times’ op-ed pages and instilled it into the hearts and minds of an economically dislocated America. This “Better Deal” is, for now, a big win for some new party marketers—but a slogan is only a start.

Jason Linkins is a writer who covers American politics and the media. He previously served as a columnist for The Huffington Post in Washington, D.C.