What the Gulf War taught me about coronavirus 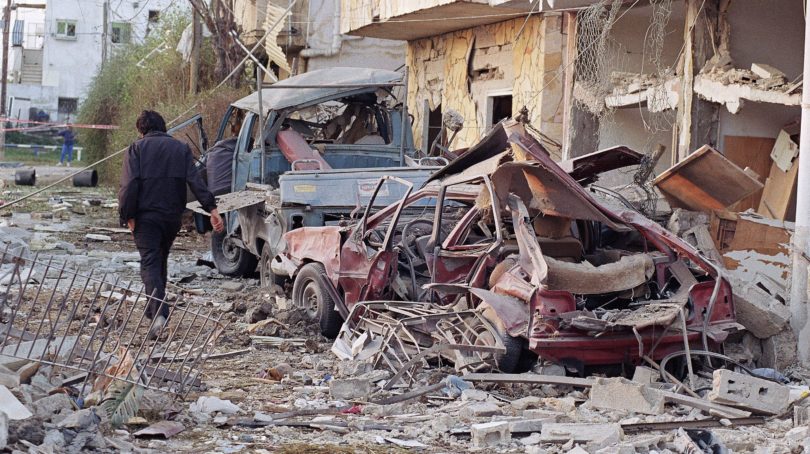 In this Jan. 18, 1991 file photo, a person walks through the debris in Tel Aviv after eight Iraqi scud missiles were fired at Israel. (John Gaps III/File/AP/CP)

This is part of a series of essays from Canadian authors on the coronavirus and how it affects our lives.

Ayelet Tsabari is a writer living in Tel Aviv. She is the author of The Art of Leaving, finalist for The Hilary Weston Writers’ Trust Prize for Nonfiction.

Last night, a delivery from the supermarket was left on my doorstep. A masked driver knocked and waved at me through the peephole and left. I stepped into the hallway of our apartment building wearing a mask and gloves, wiped each product with antibacterial wipes before carefully placing them inside, then washed the produce with soap and hot water. My partner was quarantined in our bedroom after returning from overseas, and my daughter was distance learning in her pyjamas. The situation felt surreal, but I didn’t pause to consider it. Life in crisis doesn’t leave time for pondering.

Yet the strangeness, anxiety and isolation imposed by this pandemic doesn’t feel entirely foreign. I was 17 during the first Gulf War, when missiles hit Tel Aviv. In the weeks before that, there had been talks about the war reaching Israel, but we never believed it. Then, it happened. Everything was cancelled. We stocked up on food, covered the windows with masking tape and stayed inside. It only lasted a few weeks, which, as most people who’ve been affected by war would tell you, is a very short time to be under lockdown. I didn’t know whether we would be out in time for Passover, or even for my matriculation exams. The future I had naively and deliberately prepared for became untold—wiped clean. It wasn’t the first time I was faced with the fragility of life, but it was the first time I grasped the futility of planning.

I remember my mother holding me and my brother on her bed that first night. Frightened, I pulled the straps of my gas mask on so tight it left a purple bruise on my chin the next day. I could feel my mother’s heart racing as we listened to the missiles drop, but she appeared calm, as if she could protect us from this unknown calamity. During the weeks that followed she maintained that composure and did her best to create a sense of normalcy in these extraordinary circumstances. If she was ever afraid, as she must have been, she never let it show.

I was first reminded of that moment on my mother’s bed a few months ago, when sirens unexpectedly wailed outside our home in Tel Aviv (only the second time since we moved to Israel about two years ago). In lieu of a proper bomb shelter, I rushed my six-year-old daughter to the stairwell in our apartment building and we stood against the wall, hugging. I covered her ears as the rockets hit and smiled at her reassuringly. These last few days I’ve been trying (and at times failing) to emulate my mother’s facade for the sake of my daughter. Parenting in a pandemic, it turns out, is very much like parenting in wartime: an exercise in not falling apart, feigning strength with the hope that it sticks. But instead, it is my daughter who unknowingly offers me solace. When I’m with her, dancing and making art, everything is well in the world—I’m the one who forgets.

One thing my family did together during those turbulent days of the Gulf War was laugh a lot. The popularity of live sketch comedy on Israeli TV and radio was skyrocketing. Many people still remember theses skits fondly; some may be able to quote them. Back then, Israel only had one channel, so an entire country gathered around the TV screen to watch and laugh in between sirens.

When this current lockdown began, I desperately sought the modern equivalent on social media. I found it on Facebook and on my extended family WhatsApp group. I’ve been prescribing laughter to myself like an antidote, sometimes scrolling and laughing until I have tears in my eyes, filled with gratitude for the rush of endorphins, for the momentary forgetfulness. When I told a Canadian friend about it recently, she took offense. This is not the time for jokes, she maintained. But in the Jewish tradition, we’ve been laughing at our misfortune for centuries. Because laughter is survival, a choice we can make in how we face tragedy, giving us a semblance of free will when our personal autonomy has been seized. Like Mark Twain said, “The secret source of humour itself is not joy but sorrow.”

Of course, the coronavirus is nothing like missiles or rockets; there are no sirens announcing its arrival, no explosions marking its contagion. Still, I find comfort in my experience of other dangerous times, like the Gulf War or the intifada: that we got through it somehow; that it ended, eventually.

What I learned from the Gulf War is that the only way to cope with the uncertainty is to accept it, to root ourselves firmly in the present, to live small. This also helps calm my anxiety, which in the first few days of the pandemic was so intense it felt like a second heart was beating in my chest. More than hope, which can be a precarious, imperfect tool for our times, I hold on to the now like my life depends on it.

Since new rules came out, advising us not to walk outside, I’ve been taking daily walks on my rooftop. Yesterday, as I walked in circles and listened to a literary podcast, breathing in the fresh spring air, I felt happy. I envisioned the coronavirus pandemic ending, one day. I pictured myself walking in a summer dress without a mask. I considered getting a cat. And I felt grateful for the little graces in my life: a home, a family, a rooftop, a caring community, the ability to hang laundry while leaning outside my window and basking in the morning sun, the moments I dance with my daughter in the living room, and a night sky filled with many stars and fewer planes.