What the NDP is doing for Canadians

Tom Parkin: The party has never been more relevant as it pushes the government in its pandemic responses. What have the Conservatives done lately? 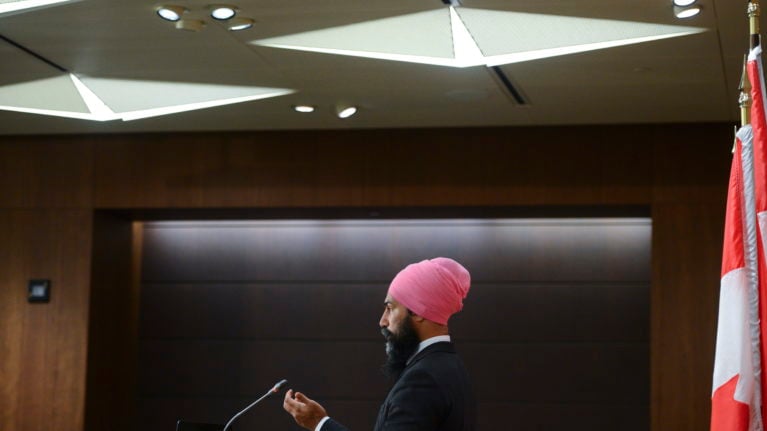 Singh holds a press conference on Parliament Hill amid the COVID-19 pandemic, on May 25, 2020 (Sean Kilpatrick/CP)

Back on March 11, the day before a conservative premier was encouraging people to enjoy a nice Florida March break, NDP leader Jagmeet Singh was proposing ways to shelter Canadians from a surging pandemic wave and its predictable economic undertow.

Fortunately, with a minority parliament and Conservative disarray, a lane was open for Singh to push his ideas with the Liberals, and get more help for more people—and get it to them faster. Singh’s string of wins continued last week when, he struck a deal to further isolate the Conservatives and give his NDP the platform to keep pressure on ministers in the Commons, even through the summer.

March 11 was an important day in our pandemic response. A shocking 631 people died from COVID-19 in Italy. The NBA cancelled its basketball season. U.S. President Donald Trump said he was “confident” he would “expeditiously defeat” the coronavirus.

And that day, our Prime Minister announced his economic support plan—waiving the one week “waiting period” for Employment Insurance sickness benefits for workers quarantined or required to self-isolate. That plan collapsed to immediate criticism. “The vast majority of Canadians will not have access to his plan,” Jagmeet Singh warned from the Commons that day. “Sixty per cent of workers have no access to Employment Insurance.”

One week later the Liberals announced a new program—CERB, the $2,000 per month Canadian Emergency Response Benefit. But it continued to be a complicated program that cut people out. Singh and his caucus again pointed to gaps. And on April 15, the Trudeau government took what it called “decisive action,” expanding CERB eligibility to include seasonal workers and some others not eligible for EI.

READ MORE: The end of the NDP

For weeks Singh and his caucus advocated for students, excluded from CERB, who face bleak summer job prospects. Finally on April 22, the Trudeau created the Canada Emergency Student Benefit.

Singh has ramped up his call for a national paid sick leave plan. And after a week of Trudeau saying that wasn’t his jurisdictional concern, on May 25, Singh got the PM on-side.

Conservatives pundits—for reasons perhaps as much psychological as ideological—seem miffed and perplexed at Singh’s string of wins for Canadians. Wrong, but self-convinced as ever, Conservatives’ big push was to cut CERB, which hit a wall of backlash. Can anyone recall any tangible win for Canadians engineered by Conservative leader Andrew Scheer?

And it seems that ideological rejection has triggered some emotional projection.

Well, it’s either conservative delusion or a grand illusion. Because on Monday this week any Canadians could have watched someone who certainly looked like NDP leader Singh, standing in what appeared to the Commons.

And he was asking a person who looked remarkably like Deputy PM Chrystia Freeland an important question: why did the PMO and Liberal government meet long term care lobbyists 12 times during the peak of care homes deaths while the PM told Canadians fixing long term care wasn’t his jurisdiction?

The PM told Canadians it’s not his job to help fix long-term care, while his office met with LTC lobbyists profiting off of seniors

Instead of hiding behind excuses & meeting with wealthy companies, the PM should meet with provinces to find a solution to fix the crisis in LTC pic.twitter.com/TR4yMbF0G4

No, it’s not illusion.

The Conservatives sidelined themselves by insisting MPs could only meet in-person in Ottawa, letting Singh strike the deal. Far from being “shut down,” MPs will participate in the Commons, virtually or in person, four day a week until the usual summer break on June 17.

MPs will get a 95 minute question and answer session each day—more than twice as long as a usual Question Period. They can reconvene the Commons at any time to pass urgent legislation. Commons committees will continue to meet.

And as a bonus, Singh won Liberal agreement that MPs will meet at least four times during the usual summer break—while the Conservatives wanted to shut down the Commons from June 17 until Sept. 21.

Singh can boast a string of wins for Canadians—and now a deal so he can keep the pressure up. The bitterness of denial and disarray doesn’t change that reality.