What the U.S. pro-life movement forgets about its own roots

Opinion: Pope Francis has been slammed for equating the saving of 'innocent unborn' with migrants. But social justice sparked the anti-abortion movement in the first place 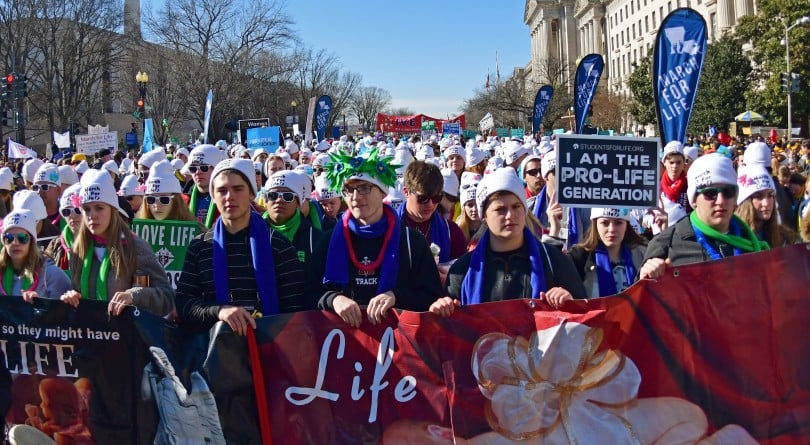 Thousands of anti-abortion activists from around the US gather near the National Mall in Washington, DC January 19, 2018 for the annual "March for Life." / AFP PHOTO / Eva HAMBACH (Photo credit should read EVA HAMBACH/AFP/Getty Images)

If there’s one thing the modern anti-abortion movement in the U.S. is known for, it’s absolutism.

So when Pope Francis ventured this week to charge, in a small part of a lengthy statement, that no Christian can consider “the situation of migrants, for example” as “a secondary issue compared to the ‘grave’ bioethical questions”—equating the lives of the “innocent unborn” to “the poor, those already born, the destitute, the abandoned”—it felt, to some, like a reprimand.

To one Fox News writer, the Pope’s directive issued “a not-so-veiled critique of right-wing conservative Christians in America.” Breitbart’s Twitter feed assured its readers that, despite Francis’s “continual insistence on the issue of migration,” nations—even those who “trust in God”—don’t need to act Christian. And Marjorie Dannenfelser, the president of the Susan B. Anthony List, a powerful anti-abortion group that supports pro-life political candidates, disagreed with the Pope vehemently. “It is impossible to equate the moral weight of abortion—the direct killing of innocent unborn children occurring on a daily massive scale, here in America and abroad—with any other social justice issue,” she said, declaring that the Pope’s statement “blurs lines and causes confusion.”

Never mind that Francis wasn’t articulating “a notion invented by some Pope, or a momentary fad,” he wrote, amidst quoting scripture that commands Christians to welcome the stranger “like Christ” and “love him as yourself.” And never mind that a spokesman for the United States Conference of Catholic Bishops noted that this interpretation is “nothing new,” given that at a mass three months ago, Francis called for Catholics to care for immigrants, and U.S. bishops have been denouncing Donald Trump’s stance on immigration from the beginning of his presidency.

But outcry from the parochial American anti-abortion crowd to yet another seemingly progressive statement from the headline-grabbing pontiff is ironic, given how much the U.S. pro-life movement owes to the early work of social-justice-minded Catholic women who equated abortion to nuclear weapons and segregation as crucial threats to the sanctity of life. This focus on the poor and needy is, after all, well within Christian doctrine in the idea of a “consistent ethic of life,” an ideology made famous by the Catholic Cardinal Joseph Bernardin in the 1980s through Eileen Egan’s phrase “seamless garment,” referring to Jesus’s untorn robe. And that’s an idea that was actually once central to the origins of the pro-life movement—an origin story that has since apparently been forgotten.

“At the beginning, the people who had this social justice model were really the heart of the movement; they were the dominant voice, largely because there wasn’t much of a national, anti-abortion movement before 1973,” Karissa Haugeberg says in an interview with Maclean’s. An assistant professor of history at Tulane University in Louisiana, Haugeberg explores the early impacts of women in the pro-life movement in her book Women Against Abortion: Inside the Largest Moral Reform Movement of the Twentieth Century, published last year.

The lack of a robust movement in the early part of the century makes sense, she added: “Why have a movement for something illegal?”

For some Catholics, however, abortion paralleled their views of the war in Vietnam, nuclear weapons and civil rights. So when it was legalized in the 1973 Roe v. Wade U.S. Supreme Court decision, Catholics were among the first to mobilize. And they didn’t come to the issue as rookies to activism, Haugeberg says: “A lot of these primarily women, but also men, had experience and really cut their teeth on anti-war activism, but also Civil Rights activism.”

While the Catholic Church was mobilized through traditional political channels, it was social-justice-minded Catholics who took the fight to the street, establishing the hallmarks of anti-abortion protests of the ’70s and ’80s, some tactics of which reverberate today: protesting outside clinics, infiltrating clinics, chaining themselves to equipment and damaging property, and displaying images of bloody fetuses. Very quickly, Evangelical activists—unencumbered by a strict church hierarchy—overwhelmed and spread the movement, Catholic strategies in hand.

“When I looked through some of the files of some of these Evangelical groups, they had IRA handbooks, they were taking the playbook from militant Catholics,” Haugeberg says. “Even the gory photos of fetuses that you see at rallies—that comes out of the anti-war movement, where anti-war activists, a lot of them Catholic, were holding up pictures of babies who’d been exposed to Agent Orange.”

It was “classic street theatre” of a kind that sought to draw cameras and attention to the protests, she says. “Often times these Evangelical groups would deliberately hire Catholics to teach them these strategies, and then ignore them when the Catholics suggested doing things other than just abortion activism.”

By the 1980s, the pro-life movement carried little scent of a “consistent ethic of life.” In part, that happened because many progressive Catholics from the outset took a pro-choice stance. Meanwhile, anti-abortion activists rallied around the Republican Party and the likes of Ronald Reagan—a political fissure that has only calcified.

But despite this history, it’s unclear whether Francis will be able to breathe a broad-minded view of life into his U.S. flock on either of the issues he raised. True,  77 per cent of Catholics polled in 2014 told the Pew Research Center that undocumented immigrants should be allowed to stay in the country, and this year, 84 per cent expressed a “favourable opinion” of the Pope—but just over half of Catholics voted for the anti-immigration politics of Donald Trump, fuelled by 60 per cent support from white Catholics. Meanwhile, Pew found that more Catholics believe abortion should be legal in all or most cases compared to those who think the opposite—53 per cent to to 44 per cent—while in 2016, a plurality of Americans said that abortion was either morally acceptable or not a moral issue at all, though the percentage of Americans who believe it to be a moral wrong spiked to 83 per cent among those who attended Catholic services.

Perhaps these are all just growing pains. At the end of our chat, Haugeberg noted that the issue of abortion as a central, galvanizing one for Catholics and Christians more generally is a relatively new phenomenon.

“Even though there is a long history of Catholics technically opposing abortion, it wasn’t a rallying cry historically,” she says. “Even when we look at the 1960s and the issues that animated ordinary Catholics, it was about poverty and social justice.”

That makes the pro-life movement a “very modern expression of faith.” One with, it would seem, a simultaneously short memory.