What to expect from the Liberals: an election, ASAP

Tom Mulcair: While the Conservative Party is still stuck in the polls, the Liberals have been setting the stage. This will be a campaign like no other. 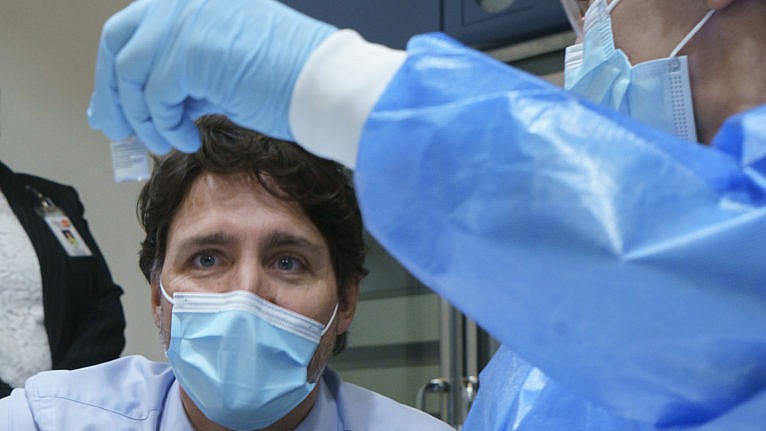 Trudeau looks at a COVID-19 vaccine vial as he tours a vaccination clinic in Montreal on March 15, 2021 (CP/Paul Chiasson)

Since the Fall, Justin Trudeau has been champing at the bit to launch into a general election. In October, the Liberals threatened the opposition parties that if they insisted on pushing for a new committee to study the WE Charity scandal, it would be a confidence vote that could send Canadians to the polls. Trudeau wasn’t bluffing. He couldn’t decently have called an election just as the second wave of the pandemic was hitting, but if he could blame the opposition, he could get away with it.

Opposition parties live for the next election. That an election was seen by them as a potential threat and not a godsend, spoke volumes about the Liberals’ strength and their own lack of preparedness.

Recent polls have the Official Opposition Conservatives at 30 per cent. Even at his low water mark in terms of personal  popularity, Stephen Harper still managed to get 32 per cent of the vote in the 2015 campaign.

In their elections held during the pandemic, both New Brunswick’s Conservative and B.C.’s NDP minority governments were rewarded with majorities. Saskatchewan returned its government with a renewed majority. The Federal Liberals want their turn.

It’s easy to understand. After a year of restrictions and lockdowns, people are exhausted and want some hope. The parties that had been there to help, got rewarded. That’s an object lesson for the Conservatives as we head into a likely late Spring election. You have to have something other than frustrated grievances on offer.

The Liberals know that a Conservative Party below 30 per cent is their key to a majority victory. Over the past few weeks we’ve seen the Liberals check off boxes for promises on everything from a new language policy to guns. It hasn’t all been smooth sailing but they’ve been clearing the way.

When Chrystia Freeland announced that we would not have a budget in March, you could sense the trap being set and the ballot question come into focus: do you want to re-elect the Liberals, who took care of you and your family; or do you want the Conservatives, who will bring tough times and austerity?

Freeland’s yet-to-be-scheduled budget will have a big honking plan for post-pandemic stimulus spending and more deficits to go with it. The Conservatives will rail that the Liberals overspent to the tune of $100 billion prior to the pandemic and when it hit…the cupboard was bare. They’ll complain that we should’ve had a budget long before. They’ll ask how such amounts could ever be paid back. It will all be true and it will all be for naught.

When the U.S. can cough up a further  $1.9 trillion to sail its way out of the post-pandemic doldrums, surely nothing Trudeau and Freeland can spend will appear worrisome by comparison.

A small clue as to the Conservative challenge could be seen in last week’s activities that commemorated one year of pandemic. There were solemn events in various capitals across the country, including Ottawa. Trudeau, always at his best when emoting, was striking just the right chord.

Then it was Erin O’Toole’s turn. It was tone deaf. Instead of empathy, caring and emotion, he rhymed off the government’s  shortcomings. Dissing its performance on vaccines, making wobbly comparisons to the U.S. vaccine delivery (yep, they manufacture them, we don’t). It was a recipe for a return to opposition.

The vaccine argument is over, that ship has sailed, Trudeau pulled off his Carbomite manoeuvre. Whatever had to be changed or added to the original contracts has been. We may have given up the right to sue, we may have greatly increased what we had to pay, it doesn’t matter. People are getting vaccinated from coast-to-coast-to coast and we’ll have largely moved on by June.

Somewhere the keeper of the Big Red Playbook is thumbing through the chapters covering the 1972 and 1974 Canadian general elections. In ‘72 Trudeau Père lost his majority after just one term. The flamboyant object of Trudeaumania had been given a lesson in humility. He made friends with David Lewis’s NDP to govern for a while, then opened a withering fire on them as he called a general election for the Summer of 1974. The rest is history and Trudeau would reign (almost) uninterrupted well into the 1980’s.

Trudeau fils can hardly wait to try his hand and seems unconcerned about any opponent.

Jagmeet Singh has done a very good job preparing his troops for the election. His fundraising has been strong and his support remains at a historically solid 20 per cent. He has some very seasoned advisors who have deep government experience, notably in Manitoba. They’re ready for battle and know the task ahead. Their deft handling of the Green Party’s attempt to make up an “insurrection” in New Brunswick during the last campaign showed expertise.  That bench strength will serve him well once again.

Tragically, some elements of his caucus have chosen to ride their anti-Israel hobby horse at this precise moment and it will take all of Singh’s considerable skills not to let it become an unnecessary distraction. Even as historical elements from his Party’s fringes try to ignite the issue, Singh will be required to waste precious energy and time explaining that talk of “Israel apartheid” and shmoozing with Jeremy Corbin are out of line with established NDP policy and out of synch with Canadian voters.

Annamie Paul remains an exceptional political figure in her own right. She knows environmental issues better than any party leader and is solid in debate in both French and in English. Unfortunately for her, like Banquo’s ghost, Elizabeth May still haunts the hallways and can be counted upon to scold the other parties and help Trudeau whenever she can, most recently berating their “tomfoolery”. It’s difficult to see how that can help the new Green leader take on those same Liberals.

The Bloc is chugging along, leader Yves-François Blanchet has been careful not to make himself the author of the government’s defeat, most recently backing the Liberal’s Bill on medically-assisted dying. His party is always at the unique whim of the electors in La Belle Province. The Bloc has bounced between its high as official opposition and its low of only four seats, since being founded. Blanchet will try his best not do anything to compromise the 30-plus ridings he won in the last campaign.

Blanchet will be vying for the same seats O’Toole hoped to compete for in Francois Legault’s heartland outside Montréal. Given O’Toole’s underperformance to date, Bloc seats are probably at greater risk in the event of a Liberal resurgence. Legault could still prove to be a wild card, though, because he is ideologically close to the Conservatives. Legault also knows that a strong Bloc could help its provincial separatist sister, the Parti Quebecois, a rival for Legault’s CAQ in next year’s general provincial election. Fifty shades of blue in the Quebec countryside.

Peter MacKay once famously said that Andrew Scheer had missed scoring on an empty net in failing to defeat Trudeau, despite the blackface scandal and other weaknesses.

That may not have been entirely fair.

What anyone facing Trudeau has to learn is that you’re not running against a politician, you’re running against a celebrity. That’s why going on the attack often backfires. Canadians may not like all of the Liberals’ policies or their politicians but they feel that they’ve known Trudeau all his life and, like indulgent parents, at times seem willing to excuse even the worst behaviour.

This will be a campaign like no other. By any fair measure, the Liberals have done exceedingly well in managing the social parts of the pandemic but failed miserably at others, in particular protection at our borders.

Trudeau is facing a third potential finding by the ethics Commissioner that he broke the rules. Will Canadians be as forgiving as ever, or will it be “three strikes you’re out” as far as some voters are concerned?

Watching the opposition parties whiff on their attempts to pin down the defence minister on issues of sexual misconduct in the military, and completely muff their most recent outing with the Keilburgers, it’s hard to conclude that Trudeau’s confidence is misplaced.