What U.K. Labour can learn from a decade-old Gordon Brown rally

Paul Wells: In the U.K. and the U.S., opposition parties are torn between true believers and big tent proponents 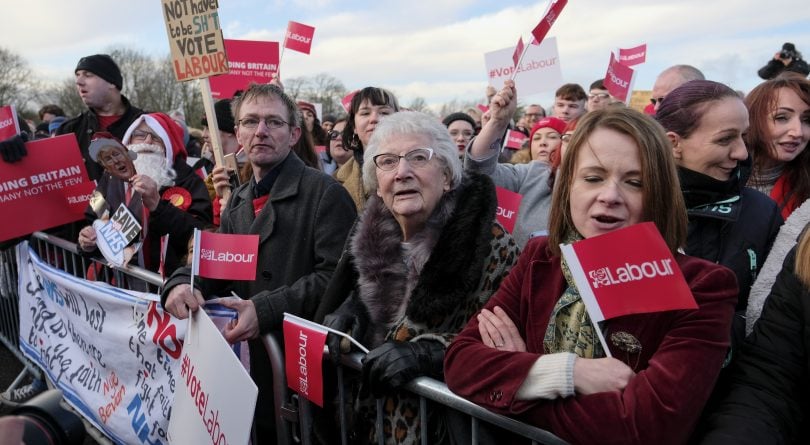 Labour Party supporters at a rally on Dec. 11, 2019, in Middlesbrough, England. (Ian Forsyth/Getty)

One of my favourite political speeches is the one Gordon Brown gave at an election rally in Manchester on May 4, 2010. He’d been prime minister of Great Britain for not quite three years, voting day was two days away, and it was pretty clear Brown’s Labour Party was going to lose. They ﬁnally did, to David Cameron and a minority Conservative government, though the results were close enough that it took a week after the vote to be sure.

There is video of the Manchester rally on YouTube, with lousy sound. There’s the wistful tone that election rallies often have when the campaign is going badly. Brown is the son of a Church of Scotland minister, hewn from the Kirkcaldy basalt, more Old Testament than New Labour. He can be gloomy at the best of times.

But after a brief opening anecdote about school repairs, he launches into a list of Labour achievements in office. “You know what else we’ve achieved by working together with the British people? The shortest [National Health Service] waiting times in history. Three million more operations a year. Over 44,000 more doctors. 90,000 more nurses. GPs open into the evenings and at weekends. Free cancer prescriptions. A two-week maximum wait to see a cancer specialist.”

READ MORE: Boris Johnson and the peculiar British art of believing in nothing

At first the applause is rote. Political audiences know their role. Politician says something positive, you clap. In Manchester, Brown keeps talking over the applause.

“Over 100 new hospitals. The winter fuel allowance. Free TV licenses. Bus passes for pensioners. The pension credit. The New Deal for the unemployed. Full-time rights for part-time workers. The Social Chapter. Record maternity pay. For the first time in history, the right to paternity leave.” By now some people in the audience are on their feet.

The next day’s papers would say Brown’s list of Labour accomplishments ran to 55 items. “The first black cabinet minister. The first Muslim minister. The first black woman minister to speak at the Commons despatch box. Civil partnerships. Gay adoption … A Scottish Parliament. A Welsh Assembly. Even a mayor for London … Peace in Northern Ireland. A Britain in Europe’s mainstream, not in Europe’s slipstream.”

Brown’s list ran for three and a half minutes. When it ended, a crowd that seemed resigned at ﬁrst to its party’s fate was roaring. “So when people say that politics just can’t change anything, we reply that it can,” Brown said. “It has. And it will in the future.”

By then the future for Labour government in Britain was seven days long. There’s been no Labour prime minister since Brown. December’s landslide defeat at the hands of Boris Johnson’s Conservatives ensures there’ll be none for a few years yet. At best.

I’ve been watching Brown’s speech again lately because much of the debate within Labour over Jeremy Corbyn’s leadership was about the relative virtues of conviction and moderation. Corbyn’s dwindling cohort of backers saw in him a defender of true Labour principles. In his opponents they saw cowards and capitulators. The worst result for Labour in over 80 years must have felt cleansing to them, purifying.

Gordon Brown’s decade-old shopping list is a reminder of what only a government can do. Brown and, to a much greater extent, Tony Blair are symbols of a Labour Party that used to be comfortable with the hard choices and contradictions of power. They left posterity a list of accomplishments that could get a Labour crowd in Manchester to its feet. If these are the wages of moderation, I suspect they look pretty good to most Labour voters now.

Every political party faces a choice between true believers and those who favour a slower pace and a bigger tent. In the United States, Democrats are struggling between champions of the party’s left wing, led by Bernie Sanders and Elizabeth Warren, and moderates, led lately by Pete Buttigieg. Of course the stakes are high: a second term for Donald Trump would devastate Democrats, never mind what it would do to the rule of law. Perhaps for that reason, progressive Democrats’ criticism of Buttigieg in particular is oddly visceral. At Grinnell College in Iowa, banners greeted Buttigieg: “Youth to Pete: You will kill us.”

I’m not here to plead for the moderates over the true believers. Everyone must weigh the issues by their own lights. If you believe there’s an urgent climate crisis, why would you not support the candidate with the most ambitious climate plan? (Maybe because you don’t think that candidate or their party will win, a quiet little accommodation with electoral math that millions of people who voted Liberal in Canada this past October had to make for themselves.)

If I were a Democrat in the United States this winter, I’d be inclined to support Elizabeth Warren, for reasons that don’t ﬁt tidily on a left-right spectrum: she seems tough and cheerful and you get the impression she’s thought things through. But I don’t buy the claim that Buttigieg is some lumbering golem baked in the McKinsey Group’s ovens for the purpose of killing Grinnell students. Most people in politics are trying to improve things. That a mayor of a mid-sized city thinks he can be president takes surpassing cheek, but that’s hardly rare in politics either.

How do you arbitrate between conviction and pragmatism? As well as you can. If there were easy rules we wouldn’t need politics. But Gordon Brown’s speech is a reminder that winning elections is better than losing them, and that if you believe in something, wanting to implement it is not a weakness.

This article appears in print in the February 2020 issue of Maclean’s magazine with the headline, “The left wants in.” Subscribe to the monthly print magazine here.