These stories of harassment exist on a spectrum, but they’re all about abuse of power as gratification, writes Tabatha Southey 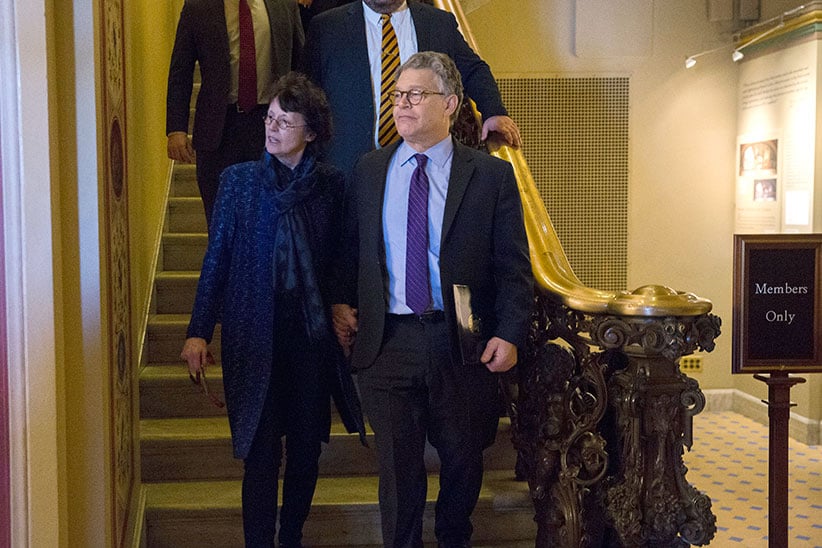 US Democratic Senator from Minnesota Al Franken (R) with his wife Franni Bryson (L) walk to his car after his resignation speech on the Senate floor in the US Capitol in Washington DC, USA, 07 December 2017. Senator Franken announced his resignation from Senate amid sexual harassment allegations and a call from over half of the Democratic caucus. (Shawn Thew/EPA)

On Dec. 7, Democratic Senator Al Franken of Minnesota announced that he will shortly be resigning from the U.S. Senate. Franken has been accused of groping several women, mostly while they were having their picture taken with him, and of planting a few big, sloppy and decidedly unsolicited kisses on the mouths of women he met in a professional capacity.

Just weeks ago, in the wake of multiple allegations of sexual misconduct against him, distribution of comedian Louis C.K’s film I Love You, Daddy was cancelled, HBO suspended C.K.’s appearance on an upcoming Night of Too Many Stars, and Netflix announced they would not be producing his next stand-up special.

Both Franken and C.K. have admitted wrongdoing, although Franken seems to be having difficulty sticking to both his story and his “sorry,” which doesn’t look good on him. I’ve followed both these men’s careers admiringly and wish that all of that comedic and legislative work had been done by men who—unlike Franken, apparently—were consistently capable of spending a day glad-handing at a state fair without grabbing a stranger’s ass uninvited. Please, just eat a corn dog, down a funnel cake, guess the weight of a pumpkin, pose for some pics and go home, guys. This is not political rocket science.

I regret that C.K. masturbated in front of women he worked with, women who worked for him, and women who knew he metaphorically held their careers in his hands even as he literally held his penis in his hand. They should never have been put in that position.

What I don’t regret is C.K. or Franken or anyone else being called to account for their behaviour or much else about this Great Moment in Sexual Harassment History we’re currently witnessing. After all, these were not “crimes against property.” This wasn’t prop comedy, as bad as that would be, partly because it wasn’t comedic and also these things were done to women who were just going about their business. I believe some greater good will come of this little revolution via revelations.

MORE: Workplace harassment is the systemic rot that can’t be measured

There was a time, not so long ago at all, when people routinely said the same things we’re hearing now—“If it really bothered her, she’d have left”; “I bet he barely touched her”; “Look, it’s a private matter, it’s between them”; “She must have done something to get him going”—but they were talking about men beating their wives. We’re still far from perfect in that regard, but a societal shift did occur, and maybe what we’re experiencing now is another.

Yes, the talents of C.K. and Franken will be missed for as long as they’re gone, but I’d trade both these guys and Matt Lauer, Charlie Rose, two Garrison Keillors, a Mark Halperin, a half-dozen Harvey Weinsteins and all the others I don’t have the patience or the word count to name if it would start to make things right. It would be great if we could get all the women who scuttled quietly away back in this deal, but we can’t—and please consider that before you bemoan the “brain drain” taking place in the entertainment industry.

We will never know what work those women might have done, but film-wise, maybe everyone should have to sit through two hours of blank screen and think about that. Just one 20-minute “set” with no one onstage at the comedy club because I have no doubt that there have been talented women who never got to figure out how great they could be because when harassed, groped, coerced and humiliated, they walked away from the scene.

“Oh, but they should have had a thicker skin!” I hear some people cry. So let me tell you something that a lot of women figure out pretty quickly: You either walk away—get to safety—when that creepy, gropey stuff happens, knowing that leaving will likely get you accused of over-reacting, perhaps called “hysterical,” or you stay, in which case you will be held responsible for anything that happens afterwards as well as having to go through it. It’s the gamble you take.

From the time you’re 14 and the dad driving you home from your babysitting gig reaches over and squeezes your thigh and says “Lookin’ good,” you are going to be, on some level, asked to account for what is done to you next. Growing up girl is partly about learning to get out of situations—short-term or long-term—that look bad or turn weird. It’s about managing your exits without hurting the feelings of the man involved or, God forbid, making him angry because there may be hell to pay if he loses his temper and then you’ll be asked, “Maybe you could have handled that a little better?”

Women play a non-stop game of Whac-A-Mole most of their lives, if the goal of Whac-A-Mole was to talk a mole gently back down to its hole without upsetting it or embarrassing it in front of its mole friends, just as another mole pops up. It’s ”I’m seeing someone else, Mole,” “I got another job offer, Mole,” “Oh, hey, Mole, you’re cute, but I have to go meet my brother.”

Most of what we’re seeing in the news about sexual harassment isn’t actually news to women because we already knew all this. All of it but the names. Well, some of the names were known, just as a lot of us know that there are women who would have merrily signed up to watch C.K. “defrag his hard drive”—but their willing participation was not what he desired. Similarly, most of us realize that a man as wealthy and powerful as Weinstein need never have spent a night alone and, listening to the stories of the many women who have credibly accused him of threatening, tormenting, sexually assaulting and raping them, we can surmise that consensual sex, a phone call away, is not what gets him off.

While these stories exist on a broad spectrum, they are about abuse of power as gratification, something these men felt entitled to at any cost, and about telling women what is first and foremost their place.

Many of us know all this, even if we’ve never known a successful film producer or politician. We understand that we are hearing these stories because they involve famous people and the stories of the famous get listened to, but that this is hardly a wild story from the decadent beyond.

Adjust for scale, and to me it looks a bit like this, a moment I’d forgotten until the  Weinstein story broke, and hardly the only story like this I know. When I was 17, I worked for a year in shoe store. It was a pretty good job. But one day, a coworker and I had an earnest discussion about our career prospects. She was about the same age as me and had just recently been hired, and she said to me quietly: “Well, you don’t want to work at ____ Jeans, you have to blow the boss,” and she shuddered ever so slightly, but somehow deeply, like it went all the way through her, and she glanced down awkwardly, shyly, for a “tough girl.” She’d worked at ____ Jeans.

The point is that if you have rent to pay, and are living paycheque-to-paycheque, and can’t afford a gap in your resume and are angling for that coveted “good reference,” you might desperately need to keep those five shifts locked down.

What we’re being told is not a “Hollywood” story: It’s just the story. A waitressing job can be a woman’s Titanic. Her boss may know that. The stakes vary, but the equation stays the same—and that’s what we need to change.