What's the point of a picket line? To stop scabs. 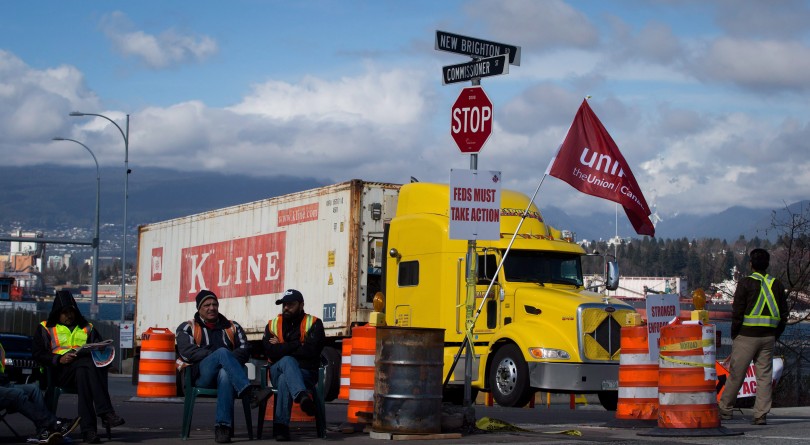 It’s provoked one of those preposterous outpourings of social media outrage that roil and churn public debates nowadays, and the first odd thing about it is that it’s only a 57-second video, with no narration. There’s just a running line of explanatory text and scrolling photographs of a few people, with their names, and a bit of sombre music in the background.

The video showed up in the social-media accounts of the labour union Unifor last Thursday, introduced this way: “Crossing a picket line hurts families. As Unifor Local 597 members enter month 21, locked out in Gander, meet some of the scabs D-J Composites has hired to do their work.”

By the weekend, the video had been viewed more than 100,000 times and the hullabaloo on Twitter and Facebook had broken out in conventional news media. The CBC: “Union defends video identifying ‘scabs’ at D-J Composites after workers report threats.” The National Post: “‘Meet the scabs’: Unifor Canada video exposes workers crossing picket line.” Canadian Press: “Debate over Unifor video that names, shames N.L. replacement workers.”

As one might imagine, Unifor has been getting it in the neck from unapologetically right-wing pundits, as in: “This video is shameful. It’s total garbage.” But where it gets really weird is the noise from the predictably anti-union crowd has been largely indistinguishable from the indignation pouring out of what you might call social justice liberals. In that crowd, Unifor is being blasted for “doxxing” or outing “marginalized folks.”

This will strike most trade unionists as a rather too charitable way to describe the people who have been merrily crossing Unifor’s picket line every damn day all this time at the D-J Composites plant up behind the airport in Gander.

By way of background, D-J Composites is a union-busting scofflaw company from Augusta, Kansas, that has been sternly admonished by the Newfoundland Labour Relations Board for unfair labour practices and bad-faith bargaining—twice. The aerospace company—it produces mostly helicopter parts—locked out the Gander workers just before Christmas, 2016 with the explicit intent of forcing the workers to eat pay cuts and surrender their contract’s union-seniority provisions.

READ MORE: As the age of AI looms, what is the future for labour and unions?

The average wage for Unifor’s aerospace workers across Canada is $35 an hour. At D-J Composites it’s $16.50 an hour, and even so, Unifor granted D-J Composite some wage concessions to help the company get on its feet after it acquired the plant in 2012. Last year, after months of fruitless talks, the union managed to get Newfoundland’s labour ministry to appoint a mediator, but it wasn’t long before the mediator gave up and booked out. The union has offered to send everything to binding arbitration, even. The company has refused.

It doesn’t help that Newfoundland labour law stacks the deck against unions, but the main reason D-J Composites has been able to get away with its sordid conduct is simple. It’s the scabs.

That so many of Unifor’s detractors fancy themselves to be “progressive” and claim to be pro-union is a thing that Ignatius Oram, a 15-year veteran at the plant and Unifor’s unit bargaining chair, finds astonishing. As he should, too.

“It’s disappointing, especially when we see comments coming from people you would think would have our backs,” Oram told me. “People who have spent any time on a picket line should have some idea about what we’ve been going through. I just don’t understand how people can think that it’s okay, that we’re supposed to just sit there day in and day out and watch these people as they cross our line.

“After spending 21 months on the picket line we still have to do that, and now it’s ‘shame on the locked out workers, shame on Unifor for exposing scab workers.’ I just don’t get it.”

It’s not an easy thing to get, either. It’s partly a generational thing, and it’s partly a cultural thing, and it’s definitely about working class morality. The ostensibly “left-wing” criticism Unifor has faced betrays a strange unfamiliarity with industrial boss-worker dynamics and an ignorance about what a picket line is actually for. A picket line isn’t a “protest.” It’s not about “raising awareness.”

The point of a picket line is to prevent a jobsite from being scabbed. Unless you’re in Quebec or B.C. where strikebreaking is against the law, and if you’re unwilling to countenance at least a constant, implicit threat of picket-line violence, then the public shaming of strikebreakers will just have to do.

A unanimous 9-0 Supreme Court of Canada ruling back in 2013 has been cited as evidence for the constitutional right of unions to circulate and broadcast photographs of strikebreakers. But the court ruling goes further than that. The judges explicitly recognized the public shaming of picket-line crossers as a legitimate and time-honoured labour union practice. It should tell you something that Canada’s most senior judges are more genuinely “woke” about these matters than the leftish tone police that have been patrolling Twitter and blackguarding Unifor ever since the video came out.

The Supreme Court decision found that Alberta’s privacy laws unreasonably restrained the free expression rights of the United Food and Commercial Workers union during a 305-day strike at the West Edmonton Mall’s Palace Casino. One of the union’s tactics was to photograph and publish the faces of people crossing their picket line, in much the same way as Unifor has done in Gander.

The Supremes upheld the union’s right to employ the tactic for the purpose of “dissuading people from crossing the picketline,” plain and simple. But for unionists like Ignatius Oram, this is not just an issue of legal rights. It’s a matter of moral duty.

“To expect to cross somebody’s picket line and not have any backlash, I don’t get it,” Oram said. “From what I’ve always known and my experience in life and with the union and workers, to be a scab worker is just the bottom of the barrel.

“It’s just something you don’t do.”