When it comes to safer cities, the time for excuses is over. Let's work together, instead.

Opinion: Toronto's former deputy police chief on the ways that violent crime has been meaningfully tackled before—and what those techniques have in common 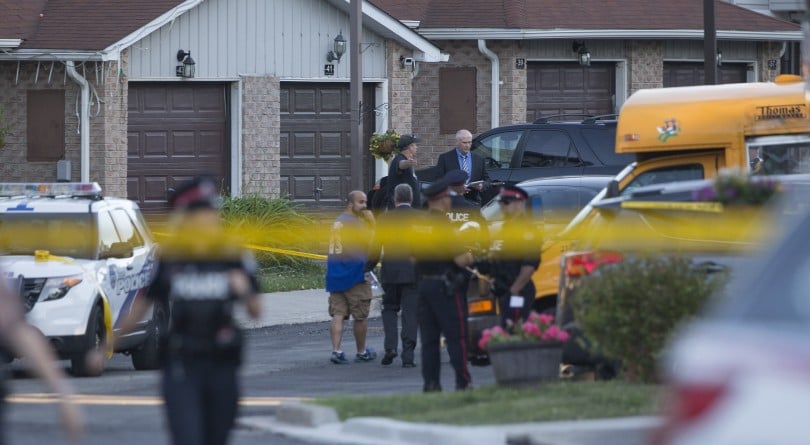 Two children were rushed to hospital after being struck by bullets in a shooting at a playground on Alton Towers Circle in Scarborough, on June 14, 2018. (Rick Madonik/Toronto Star via Getty Images)

UPDATE, Jul. 22, 2018: A shooting at Toronto’s Greektown on the Danforth neighbourhood has left at least two dead and at least 12 injured. Click here for the latest.

Peter Sloly is the partner (national security and justice lead) at Deloitte Canada. He was Toronto’s deputy police chief from 2009 to 2016, and was a member of the Toronto Police for 27 years.

You’ve seen the headlines that are inundating our news feeds across the country over this long, hot summer. The spike in gun and gang violence in Canada is not only posing public safety risks, snuffing out innocent lives, increasing social costs while also undermining public confidence in our police and justice system – it’s also impacting our reputation as one of the world’s safest and best countries.

My career as Toronto deputy police chief ended in 2016, but in my role as National Security and Justice Lead at Deloitte, I remain committed to improving policing and public safety. And it’s safe to say that this issue matters deeply to me, as it does to Canadians from coast to coast to coast.

Why is this happening? Who is at fault? Is this a one-off “summer of the gun” blip, or a tragically developing trend? These are the questions I’m fielding daily from reporters and colleagues, and from friends and strangers.

There is no single cause to this violence spike, and there is no single silver-bullet solution either. It’s not the answer you were probably hoping to hear—but I’m optimistic that we can get on top of this spike and drive it down if we work smarter, harder and differently together.

The profession of policing is going through an exponential period of change and challenge. Police officers are growing more frustrated with the lack of real progress in their profession and they increasingly feel unable to protect their communities or themselves. People in cities across Canada and around the world want to be and, quite frankly, deserve to be better served, protected and respected.

But the truth is that there are important and effective ways for us to make big changes in policing and public safety—changes that don’t cost a lot of money, don’t take a lot of time, and don’t require a lot of new legislation. However, these changes do require police, politicians and the public to work together in very specific and very different ways. These changes require an integrated approach and a colossal shift in thinking, and they can’t happen in a vacuum. There are examples of successful programs that have worked around the world and in Canada that each provide lessons of how to achieve safer cities, and they have one fundamental thing in common: an all-hands approach from everyone within a community.

Consider, for example, the work of Marcia Brown and the Trust 15 Youth Community Support Organization. I was introduced to Marcia in 2012 when the city of Toronto was again experiencing escalating gun, gang and drug-related violence. Marcia is a special education professional by training who decided to take on another special job: trying to help young kids stay safe in their neighbourhood and be successful in their lives. Marcia recruited “at-risk” kids to her Trust 15 program for improving education outcomes and for building resilient characters, and as such had an instantly inspirational effect on the kids in her program and in the neighbourhood as a whole. The local police joined the Trust 15 Board, provided free space in the station’s community room for the programs, and helped mentor the kids in the program. Trust 15 now serves and protects more than 190 kids who are off the streets, in the program, and on the path to success, showing us how communities and cops can come together to co-produce health, safety, resilience and wellness outcomes.

Or consider the work of Dale McFee, the former chief of police in Prince Albert, Sask., and current provincial deputy minister of justice who established in 2012 the first police “hub” service model in Canada. It’s a model that is based on simple principles: that crime problems usually have an underlying set of social issues (poverty, health, etc.), and that you don’t deal with social issues by defaulting to a justice-system solution. Dale invited a local group of “unusual suspects” to the hub table to join his officers, including local not-for-profit organizations, representatives from public health, education and other civic leaders. They all worked together to find customized, non-judicial solutions for people at high-risk to be a victim of crime and/or a criminal. To date, the Prince Albert hub model has resulted in a total cost savings to society of almost $13 million dollars, and it has reduced violent crime by more than 37 per cent. It teaches us that we need to dig deeper—crime is rarely just a crime issue.

Then there’s the “Bogota Experiment,” which started in 1995, when Antanas Mockus was elected mayor in Bogota, Colombia—a city that was at the epicentre of the Colombian drug cartels and was ranked in the top five of the most dangerous urban areas in the world. Mockus was elected on a platform of transforming Bogota residents into “Super Citizens.” Mockus believed that if all members of civil society worked together then they could co-create innovative solutions to solve serious crime and social justice problems. Within a year of taking office, he had achieved real public safety change by helping to develop creative, outside-the-box solutions. For example, in order to reduce traffic- related deaths, Mockus recruited art students from universities and colleges, dressed them up as mimes and then put them at the high accident locations to direct traffic. Within a year, traffic-related deaths were reduced and hundreds of lives were saved. Mockus then took on the homicide crisis, which was predominantly driven by the deadly combination of bars, booze and guns. He successfully engaged the bar owners to adjust their operating practices and he mobilized women-led community groups to work with police and to interact with patrons in order to change the behaviours that fueled the violent incidents. Within a year, the homicide rate in Bogota fell by over 50 per cent. The lesson here: stay open-minded, because this is not a “one-size-fits-all” problem, and there is no “one-size-fits-all” solution.

And the way that Toronto Police have worked in the Dixon Road neighbourhood in the Greater Toronto Area—which suffered from an average of 15 gun and gang-related homicides over a three-year period—shows us how working at the micro neighbourhood level can improve public safety, service, trust and value. In 2013, Toronto Police arrested the core gang members while also embedding and dedicating a team of six neighbourhood officers to the Dixon Road community. The primary job of the team was to build relationships with the local community, earn the community’s respect and work with the community to develop and implement proactive crime prevention programs. Over the next three years, there were zero homicides and zero shootings in the community. In those three years, the combined efforts of the local neighbourhood officer team and the local community potentially saved 30 people from violent deaths, 30 families from tragic loss, and—secondarily but importantly—approximately $150 million for Canadian taxpayers, per a Public Safety Canada study on the approximately $5-million cost of a single homicide.

These are real examples that prove there are ways to make things better. We just need to work together.

By no means am I trying to oversimplify the issue of gun violence plaguing us across Canada. What I am trying to underscore is that good policing gets done by good cops, as well as caring community members and courageous civic leaders working harder and smarter together. That’s how we can make our communities safer and our societies more just. We all want the same thing: better policing and improved public safety. But we know that doing the same old things to prevent violent crime is not working. Why not work together?

We have all that we need in Canada to make real changes in policing as well as sustainable advances in public safety and community well-being. What we don’t have are any more excuses.