When it comes to Venezuela, Canada's on the wrong side of the coup

Andray Domise: The myth of this country's 'peacekeeping' nature lets it get away with destabilizing and taking advantage of less powerful nations 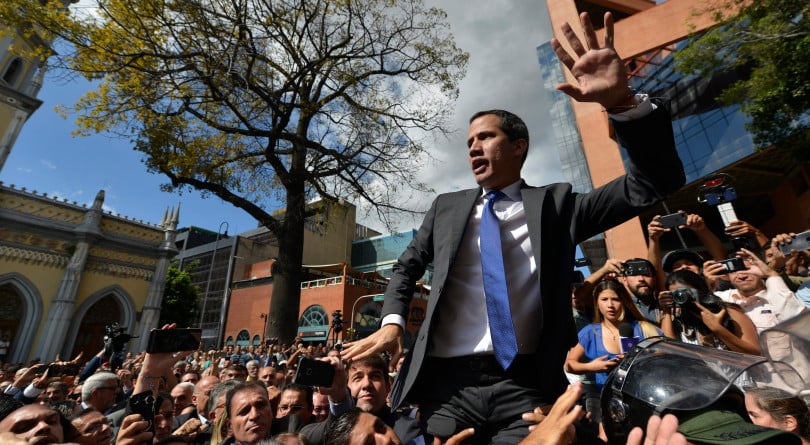 Opposition leader Juan Guaido argues for National Guards to let him and all opposition lawmakers into the National Assembly, outside the legislature in Caracas, Venezuela, Jan. 7, 2020. (Matias Delacroix/AP)

A few months ago, I was fortunate enough to be offered a preview of Haiti Betrayed, a documentary by filmmaker and photographer Elaine Brière. The film, which concerns the lengthy history of interference, subversion and outright invasion by developed nations to undermine Haitian sovereignty, begins with a cri de coeur against one of the countries most responsible for Haiti’s current state of immiseration: Canada.

In the opening scene, a Haitian man, standing across the street from the Canadian embassy in Port-au-Prince, screams remonstrations against the edifice in Haitian Creole: “We don’t have anything against Canada! Why are you against us?”

The film makes a damning case for Canada’s role in facilitating the ousting of Haiti’s democratically elected president Jean-Bertrand Aristide. This coup-from-without enabled the military regime that followed his overthrow; Canada has never apologized for the horrific violence committed by the RCMP-trained National Police against the Haitian protesters who rose up in response.

READ: What has Canada done for Bolivia?

The film arrives at a rather fortuitous time, as today’s Liberal government continues the tradition of undermining the ability of oppressed people in foreign nations to achieve self-determination, while covering its actions in the gossamer-thin ruse of actually supporting those human rights abroad.

In late January, Juan Guaidó, the disputed leader of Venezuela’s National Assembly and self-declared “interim president,” embarked on a global tour to garner support for his year-long bid to militarily oust President Nicolás Maduro. He was received warmly by Foreign Affairs Minister François-Philippe Champagne and Prime Minister Justin Trudeau, who addressed him as “interim president.” It bears mentioning that Guaidó did not run as a presidential candidate in the 2018 Venezuelan elections. Even if he had wanted to, he does not lead a political party, nor does he belong to one (Guaidó resigned from Voluntad Popular last year to “focus completely on the freedom of Venezuela”).

In fact, prior to Guaidó’s appointment as the head of the National Assembly in January 2019, he was practically unknown. And yet there he was in Ottawa, with our government lending support to another would-be coup regime.

This follows the Global Affairs department’s support of last year’s Bolivian coup, which saw far-right fringe politician Jeanine Añez stage a military takeover. Two days before Añez declared herself president, without enough members of Bolivia’s legislative assembly to reach quorum, Global Affairs Canada released the following statement: “Canada stands with Bolivia and the democratic will of its people. We note the resignation of President [Evo] Morales and will continue to support Bolivia during this transition and the new elections.”

Shortly afterwards, Añez’s regime put the country’s military to work in an attempt to extirpate civilian and political opposition. No comments from the Global Affairs department. Recently, Añez fired her entire cabinet and broke an early pledge by declaring herself a candidate in the upcoming May election. Again, no comment from Canada.

The PetroCaribe program, wherein Venezuela provided subsidized oil allotments and development funds to member Caribbean states, was cut off two years ago amid banking and economic sanctions imposed by the United States. Haiti, which depended heavily on the program, has since been plunged into political turmoil due to rapidly inflating fuel prices and allegations of government embezzlement from the fund. Recently, President Maduro announced the program will be relaunched in the first half of 2020, but Haiti will no longer be a member.

And that’s because, in January 2019, Western-backed Haitian President Jovenel Moïse, along with 18 other member countries, voted in support of the Venezuelan coup attempt at a meeting of the Organization of American States (OAS) in Washington, D.C. Haiti took a gamble, following Canada’s lead and that of 60 other countries—and lost. And 15 years after we robbed it of national self-determination, the country still finds itself racked by poverty and political instability.

To answer the question of the impassioned gentleman from Haiti Betrayed, why are we against Haiti? Well, the same reason we appear to find ourselves constantly destabilizing and taking advantage of less powerful nations: because we can, and because the myth of our peacekeeping nature lets us get away with it. Those who believe in the false legitimacy of this “interim president” need only look to countries like Bolivia and Haiti to see the fruits of Canada’s benevolence.

This article appears in print in the March 2020 issue of Maclean’s magazine with the headline, “Wrong side of the coup.” Subscribe to the monthly print magazine here.