Leo McKay Jr: A gap has opened between what we thought the world was like and how it now appears. In Nova Scotia, there is surreality upon surreality. 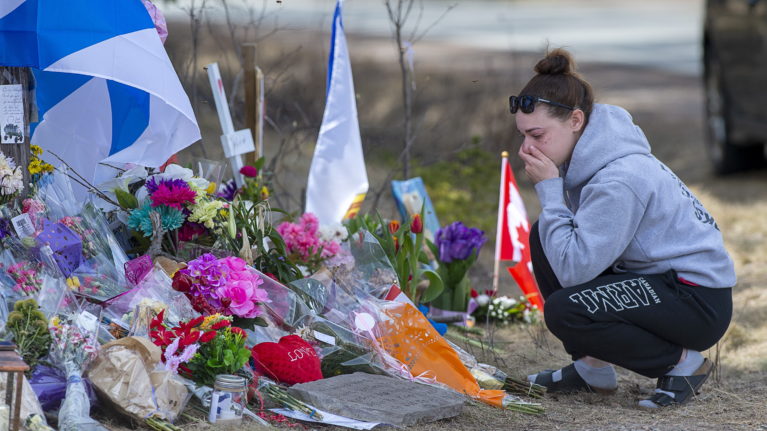 A woman pays her respects at a roadside memorial on Portapique Road in Portapique, N.S. on April 24, 2020 (CP/Andrew Vaughan)

Leo McKay Jr (@leomckayjr) is a writer and teacher in Truro, N.S.

After more than 26 years as a high school English teacher, my way of looking at the world has been deeply affected by the material I teach: poetry, plays, short stories, novels, and films have come to shape my perception of the world, so that a few years back, when there was a shocking murder just a few blocks from where I live and I was seeing social media calls for revenge, I was prompted to post, as part of a general admonition against revenge, a quotation from Romeo and Juliet: “Confusion’s cure lies not in these confusions.”

And apparently, I am learning, it’s not just the works of literature that have so thoroughly entered my consciousness, but some of the literary terms and concepts I’ve been teaching generations of young people have also become a part of the lens through which I see the world.

So in the midst of this pandemic I’ve been thinking a lot about a technique called defamiliarization. Harmon’s A Handbook to Literature tells me that defamiliarization is a process of great art by which “the familiar” is suddenly “made to seem strange,” and that through this estrangement we are made to realize that “we have eyes and ears.”

In other words, by seeing the familiar presented in an unfamiliar way, we can learn to perceive more fully.

Defamiliarization is perhaps an alien word for many, but it is a common technique. There are examples large and small. One of the most famous is the opening sentence of Orwell’s Nineteen Eighty-four: “It was a bright day in April, and the clocks were striking thirteen.” In the 70-ish years since that book was published, there have been many opinions expressed about the exact meaning of that line, but whatever it means, whatever its full significance, it is obviously a signal to the reader: This is a world like the one you know (There are clocks. There is a month called April.), but the fact that the clocks are striking 13 is off-puttingly unfamiliar. That’s defamiliarization.

In the midst of the slow-moving catastrophe of the COVID-19 pandemic, we’ve all heard people remark on the state of our newly-changed world: “I went to the grocery store and it was surreal.” “I had to stand in a weird line-up of masked people to get into the pharmacy. It was like a movie.”

READ MORE: In memory of Emily Tuck, the young fiddler from Portapique

This strange, surreal, post-apocalyptic feel that our world has suddenly taken on is not so much a characteristic of the world itself, but of our bewildered response to it. This is defamiliarization not in art, but in real life. A gap has opened up between what we thought the world was like and how it currently appears.

This past Saturday night and Sunday morning, in the area of Nova Scotia where I live, a fast-moving catastrophe got superimposed on the slow-moving catastrophe of the pandemic. We found ourselves in the midst of what would later be determined was the largest mass shooting in Canadian history.

I live in the town of Truro, about 35 minutes from Portapique. Portapique is in the catchment area of the high school where I’ve been a teacher for more than 26 years. I know and have known lots of people from Portapique and the surrounding communities: Bass River, Economy, Great Village, Londonderry. And perhaps because my sense of community is shaped by my years as a teacher, I think of all the places where my students come to my school from, on busses, in cars, and on foot, as one big community.

From the moment I awoke on Sunday, this event felt like something that was happening to me and to the people closest to me. And I’m sure most people in the town of Truro felt the same way.

The first thing I did when I realized that whatever was happening in Portapique was serious, was to make a quick mental list of who I knew out that way. And I did what most people do in emergency circumstances: I sent texts. To three people. A colleague who lives in the community, a friend and former student who lives very near Portapique, and a colleague whose family has deep roots in the area. The texts I sent were some version of: “Hey. Looks like something crazy is going on in Portapique. Hope you’re okay.”

What you almost invariably get back when you send a text like that is: “Yeah. Everything is good. Thanks.”

Even by the sick standards of mass shootings, the details of this event are bizarre. Like many people lucky enough to only be indirectly affected by the violence, I experienced the mass shooting through social media. And I spent a lot of the morning cautioning my young adult children not to trust the seemingly exaggerated details they were seeing local people post. The gunman is driving a police car. He’s pulling people over like he’s a cop and then just shooting them. Photos of houses and police cars on fire. I was reminded of the hoax photos that emerge during hurricanes: sharks swimming through shopping malls. “This can’t all be true,” I kept telling my family members.

But I was wrong.

The artistic effect of defamiliarization, the effect of seeing a world presented in an off-kilter manner, is often a state of useful bewilderment. The difference between how we expect the world to appear and how it appears in, say, some post-apocalyptic film, opens up a useful gap. A space for reflection. A moment where it’s possible to ask potentially beneficial questions such as: How is my world different to the one depicted here? How is it similar? Could my world end up like this one? How?

Orwell’s most famous novel is intended as a warning: this could happen.

So is there something to learn from the defamiliarization we experience not in art, but in real life? Can we learn from the strangeness of the pandemic? Many people are expressing just such a hope. That we’ll come to trust public institutions again. That we’ll be more willing to think flexibly about our economy and the environment.

As for this mass shooting, I think it’s a bit much to expect a devastated community to start some sort of learning process. Hurt people must grieve. The immediate lessons in this event will doubtless be emotional: How to keep loving each other. How to rebuild trust in others when that trust has been violently breached. How to heal communities when the people in them, for the time being, cannot even be in the same room with each other.

Personally, and I say this only for myself, I pledge to begin to face the maleness of acts of violence such as these. As my radical feminist daughter points out to me: Violent acts like this are attempts to control, and these attempts stem from a sense of entitlement that is problematically linked to our cultural ideas of what it means to be a man. I pledge to acknowledge this misplaced sense of entitlement when I see it in myself. I pledge to call it out in others when I see it in them. I pledge, myself, to face hard truths, even when they implicate me and others in my social reach. I pledge to listen to knowledgeable people who have ideas about how to curb and eliminate femicide and male violence. I pledge not to shrug in the face of violence and pretend there is nothing that can be done.

All views expressed in this article are the author’s own and do not represent the opinions or official policies of his employer or of any organization of which he is a member.